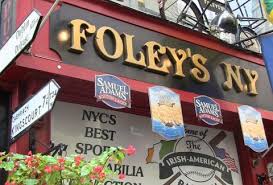 A few years ago, the owner of an Irish bar in New York City banned the singing of “Danny Boy” — not only St. Patrick’s Day, but during the entire month of March.

Shaun Clancy, owner of Foley’s NY Pub & Restaurant, cited a number of reasons — the song is listed among the 25 “most depressing” songs of all time, it’s routinely butchered by over-imbibing customers, it’s overplayed at the expense of much better Irish songs, and it was written by an Englishman who had never been to Ireland.

Last year, however, Clancy lifted the ban, courtesy of a Northern Ireland businessman peddling premium Irish whiskey. Peter Lavery convinced Clancy to stock his Danny Boy whiskey in Foley’s after hearing of the ban and visiting Clancy in person.

Lavery’s own story is as uplifting as the song “Danny Boy” is depressing. A former Belfast bus driver, Lavery won $16 million in the lottery and parlayed his winnings into prominence in the business community while becoming a major contributor to several charities. Clancy was “thrilled” that Lavery chose Foley’s as the first bar in America to serve Danny Boy whiskey and, in view of that honor, lifted the ban on the song.

“Work is the curse of the drinking classes.”
—Oscar Wilde

Clancy is a native of Ireland who emigrated to the United States and fell in love with his adopted country and its national game of baseball. The walls of Foley’s are decked with photographs of players and managers and other baseball artifacts, including dozens of signed baseballs.

The bar is located on 33rd Street, just west of Fifth Avenue, opposite the Empire State Building.

Michael Sheehan, a proud Irishman, is a longtime writer and marketing executive, and his wife Ellen have lived in Monmouth Beach for nearly 50 years.