In an effort to expand beyond the declining oceanfront hotel scene at the close of the 19th century, city developers turned their attention to the river area — Pleasure Bay, a tributary of the Shrewsbury River.

In its glory days the location offered boating, bathing, fishing, lodging, fine dining, and entertainment. Clambakes and “shore dinners” were all the rage. By the 1890s, Pleasure Bay Park “saw champagne flow like the rippling waters of the Shrewsbury,” according to the Long Branch Daily Record.

According to a 1941 Long Branch Daily Record story: “In the days when palatial steamboats plied between Long Branch and New York, Pleasure Bay was place of distinction. The favorite gathering place for the elite of the land. The era’s celebrities sought relaxation and fine foods at the hotels operating there.” Patrons included Presidents Grant and Garfield, Jim Fisk, Jay Gould, Diamond Jim Brady, Hugh Hastings, George Pullman, A.J. Drexel, and Garret Hobart.

Access could be had by boat, trolley, steamship and later auto. In fact, with the passing of the steamboat era in the late 1920s, Pleasure Bay would lose its “life blood.” By the early 1940s, area waters were a “skeleton of its former glory.”

The oldest hotel on the Shrewsbury River — Price’s Hotel in Pleasure Bay — was established in 1848 by Captain Edward Hartshorne Price. By 1937, the 12-room hotel and restaurant were considered “the choicest spot in Jersey,” by the Long Branch Daily Record. Frequently refereed to as “a historic Shore landmark,” everyone from presidents to industrialists to actors visited. Price’s wife Ann (West) helped run the business. She died in 1898; he passed in 1907. It was all wrecked by fire in November 1953. The area’s Long Branch Ice Boat & Yacht Club was formed at Price’s Hotel in 1901.

In June 1929, New York developer Frank Pergola, acquired 14 acres (the park land, Avenel Hotel, and surrounding area) from the Patten estate. He ended up building 25 bungalows along the Shrewsbury River and also constructed a bulkhead and area streets, but the Great Depression hit his interests hard.

Here is the photo-essay on Pleasure Bay. Enjoy: 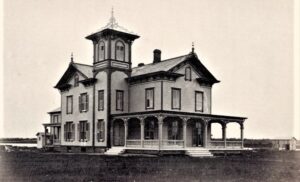 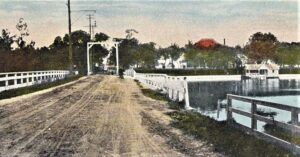 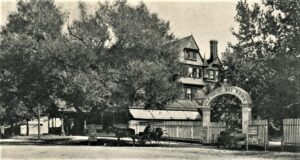 Entrance to Pleasure Bay Park on Atlantic Avenue, 1906. In 1919, the Long Branch Steamboat Company acquired the park its amusements and lodgings. 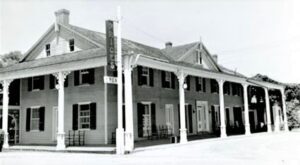 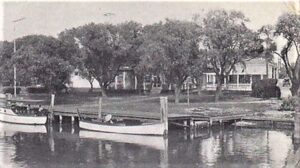 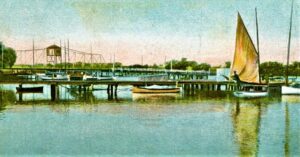 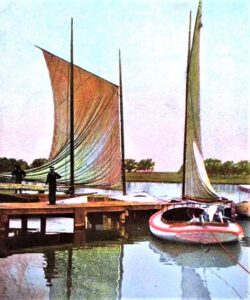 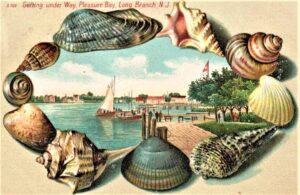 Pleasure Bay Park on Atlantic Avenue, 1905. At its peak time as a resort, the park had a trolley line, boat dock, floating theater for concerts and shows, amusement rides and picnic facilities. The area was once owned by George M. Harvey, a former US Ambassador to Great Britain. 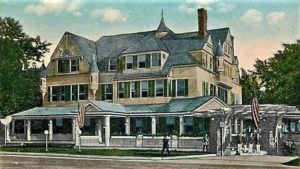 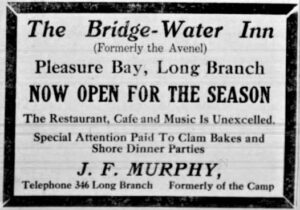 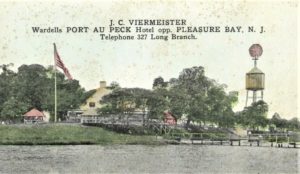 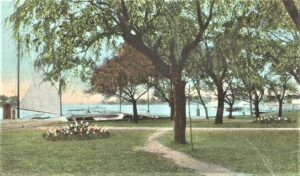 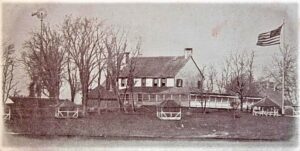 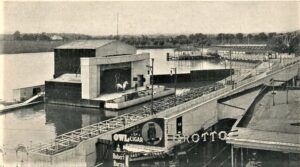 Orpheum Theatre at Pleasure Bay Park, 1906. It was an “open-air” stage along the riverfront. A summer ending “Water Carnival” that season drew 15,000+ spectators. There was also a Pleasure Bay Opera Company that performed here. 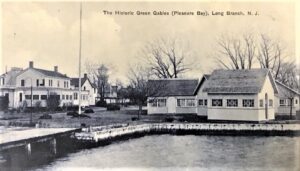 “Green Gables” Hotel at Pleasure Bay, 1920. Nicholas E. West opened the spot in 1880 and was a longtime owner. Joseph H. Hornung was a later owner. 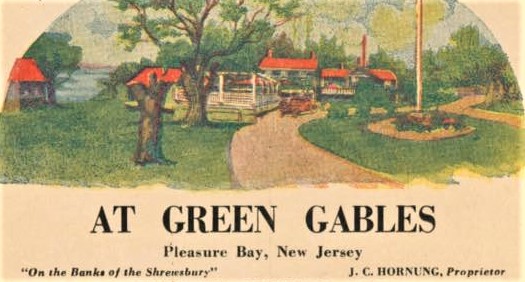 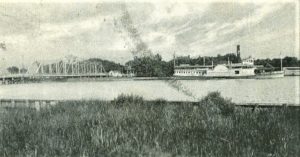 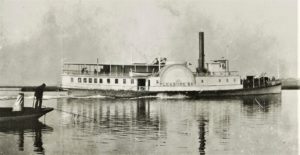 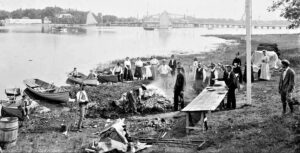 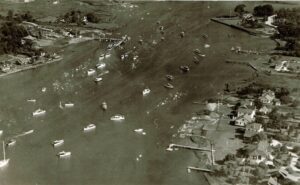 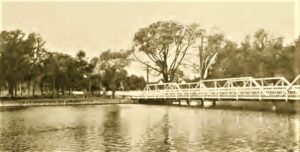 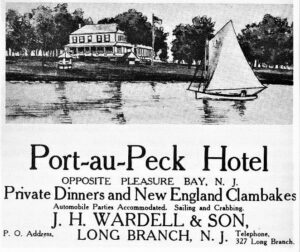 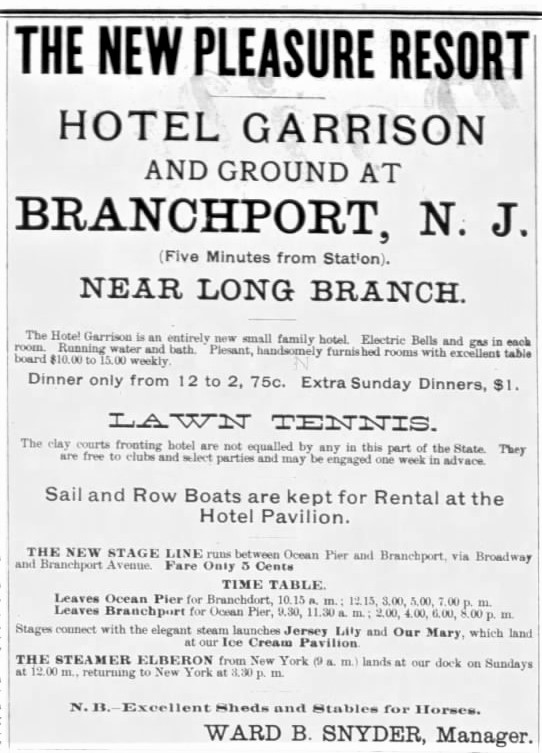 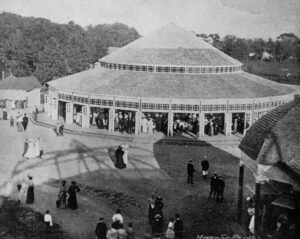 Grand Carousel at Pleasure Bay, 1911. Designed in 1897 by Charles Looff, who built the first Coney Island merry-go-round in 1876. Moved from LB in 1910, ultimately the structure ended up at a Central Massachusetts amusement park until 2000. 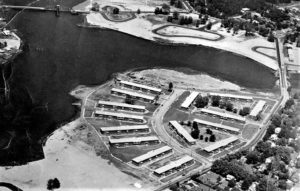 Pleasure Bay Apartments, 1966. Located at Atlantic Avenue and Liberty Street, when first opened in March 1964, it included 270 units in a “garden apartment community” (rents started at $104/month). Built on 30-acres along the river, Lionel K. Levy was the project architect; the developer was Atlantic-Shrewsbury Corp. 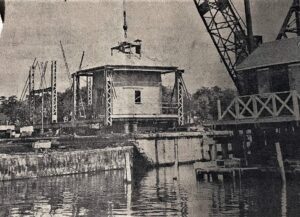 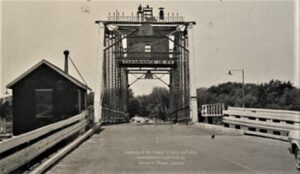 Old Pleasure Bay Bridge, 1930s. Opened in 1884, it was the last steam-powered swing bridge in the county. The old bridge built by E.A. Young of Elizabeth cost $8,250; the new bridge built by Wittberg Construction cost $1.3 million. 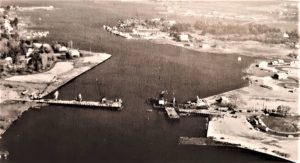 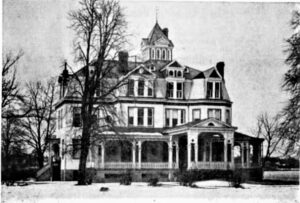 The massive Baruch family home on Atlantic Avenue, 1900. The 35-room, 12-bath, 15-acre estate near Pleasure Bay was known as “Anchorage.” Bernard Baruch (1870-1965) was a financial advisor to seven American presidents.