The Churches of Monmouth Beach

Monmouth Beach was an amazing community in the late 19th Century. In addition to the rich and famous there were also, thanks be, the humble and devout.

Over a 20-year period in the late 1800s, two large borough houses of worship were built — the Episcopal St. Peter’s of Galilee Church in 1873 on Ocean Avenue and the Roman Catholic Church of the Precious Blood in 1891 on Riverdale Avenue. Only Precious Blood remains today. 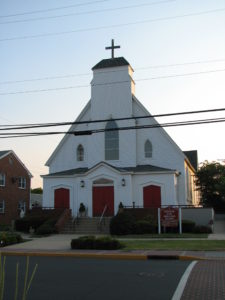 Back in that Gilded Age time, the borough’s coast was a “Millionaire’s Row” — our seashore was dotted with large Victorian mansions, many requiring up to 15 household employees to maintain. The town also had several hotels and inns as well as the exclusive Monmouth Beach Clubhouse Hotel on Beach Road. Many of those workers (mostly Irish immigrant cooks, maids, gardeners and other household staff) and their families were Catholic, and rather than continue to make the three-mile journey to the Our Lady Star of the Sea Church in Long Branch, they decided to build their own house of worship.

Ground Breaking
In 1889, John Maney, Sr., a founding member of the MB school board, sold his land on Wesley Street for $1,500 for the church’s construction. The cornerstone was laid on June 21, 1891 and Michael J. O’Farrell, the Irish-born Bishop  of Trenton, was there to bless the event. John Burke of Asbury Park was the builder.

At first a mission of Star of the Sea, it officially became its own parish in 1910. The initial First Holy Communion was held in June 1911. Massive storm damage to shore area homes in 1913 -1914 reduced the population; the congregation dwindled and the church was reduced back to mission status.

In those days, since the church was unheated, wintertime services were often held in a nearby chapel. The one-room chapel, located behind the garage of the current rectory, had no pews and was heated by a large potbelly stove. In later years, that building was moved to Wesley Street. In the late 1920s the church steeple was removed after several lightning strikes (which still hit the roof today). In the late 1930s central heating was added to the church and catechism classes were taught on the front porch of a Riverdale Avenue home.

Fixed Church
In 1946, Precious Blood again became a permanent parish, opened year round under the Rev. Francis J. Dwyer, who rented a room on West Street from Frances Lockwood. A New Brunswick native and former chaplain for the Jamesburg State Home for Boys, Father Dwyer died in 1986 at age 78.

Under the pastorship of the Rev. Walter H. Greene (appointed in Sept. 1950), a rectory was built in 1952 (known as the Burns Cottage) and he also managed the purchase of a house at the corner of Riverdale Avenue and Griffin Street for the parish. The parish even had an Irish-born priest, the Rev. Jeremiah Murphy, who died young of a heart attack while pastor in 1955. 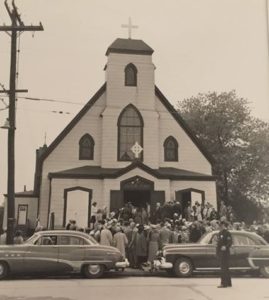 The Rev. Maurice P. Griffin was named parish administrator in 1955 and pastor in 1960.  Under his leadership a parish center (the Catechetical Center) was opened in November 1961 — the first of its kind in the Trenton Diocese. According to an August 1960 Asbury Park Press story, the building was “designed to satisfy the spiritual and recreational needs of the parish and the community.”

For construction, the parish had purchased a large track of land off Wesley Street for $500 from Alfred and Beatrice Ennis in 1947. The parish center, built at a cost of $175,000, included a 550-seat auditorium-gymnasium, four classrooms, kitchen and administration offices. Parishioners William Carhart, James Pascucci, Walter Burns and Thomas Barham were part of a building committee that quickly raised nearly $100,000 for the project.

Beginning in the mid-1960s, the MB School rented the facility due to a lack of space at its nearby Griffin Street school. By 1969, the school was paying $4,200 a year to rent the space and even offered to buy the facility, but the dioceses rejected the idea. The school left the center in 1976.

A devoted theologian with a college degree in forestry, the Rev. Earl A. Gannon was the longest serving parish priest from 1963 to 1986. To retire the debt on the parish center, Father Gannon instituted popular bingo nights. Born in Syracuse, NY and ordained a priest on St. Patrick’s Day 1945, he died in Feb. 1999.

The Rev. John T. Kielb, appointed pastor in Sept. 1989,  led the church when it celebrated it centennial in 1991. The Bayonne native served until poor health forced his retirement in 2010. He died in March 2013 at age 64.

The Riverdale Avenue house of worship was led by Rev. Robert (“Father Bob”) Kaeding from 2011 to 2019. The Rev. Kaeding, who is gay, was also the director/founder of the The Center in Asbury Park, a volunteer organization that helps people with HIV/AIDS. In May 2019. the Rev. Michael D. Sullivan, former pastor at St. Mary of the Lake Parish in Lakewood, was appointed pastor at Precious Blood.

The parish is comprised of an active and devoted congregation (which includes Monmouth Beach, the Port-au-Peck area in Oceanport, and North Long Branch). It is part of the Roman Catholic Diocese of Trenton established in 1881.

In 2001, Frank Woolley, a World War II hero who returned home to Monmouth Beach to face a challenging life of blindness, willed his Riverdale Avenue house to the parish. In 2006, the parish completed a large rehabilitation project at a cost of more than $500,000. Restrooms were added, all stained-glass windows were removed and restored, and a roof and new siding were added. New pews were installed later.

“The Church of the Fishermen”

The St. Peter’s Church of Galilee — built right at the water’s edge — was dedicated in August 1873. Classic images of the majestic house of worship and Galilee fishermen doing their trade in the beach foreground is iconic Monmouth Beach. 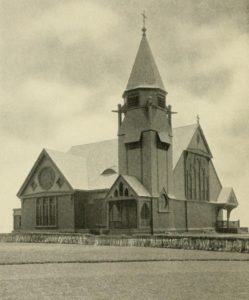 It was also known as “Rikers’ Church” after the John L. Riker family, who were chemical industry titans and owners of the adjacent property. The Teese, Keasbey, and Dodd families also were major church benefactors. Situated on the east side of Ocean Avenue, construction of the dark green-shingle church cost $8,000.

The church, which had a magnificent pipe organ (Dr. Theodore W. Moses was the longtime organist), had no fixed clergy. Open only during “15 summer weeks,” the seashore church played host to many “high-society” weddings (including family of former NJ Gov. Christine Whitman, her  maternal grandparents, Reeve and Kate Prentice Schley, were married there in September 1907).

Some of the “leading clergymen of the country” were said to give “services always of and interesting variety” at the seaside church. The Right Rev. Ethelbert Talbot, a presiding bishop of the Episcopal Church, gave services at St. Peter’s in 1914.

Frequently under assault due to major storms (a bolt of lightning struck the steeple during a Summer 1902 service), for protection the large wooden Gothic church was moved to the westside of Ocean Avenue  (to a spot north of today’s MB Cultural Center) in May 1933 by Long Branch contractor Joseph Kirby.

Unused as a church beginning in 1941, borough commissioners rejected a plan by a Broadway theatrical man and play writer, Clinton P. King, to use the building as a summer theater in August 1949. King who bought the building in 1947 liked to play the pipe organ at night.

The vacant Episcopal house of worship was burned to the ground in a spectacular May 1955 fire, as strong east winds from the ocean fed the flames.