More than 75 Christmas seasons ago, with war raging around the globe, a mother sat down and wrote a simple but powerful letter to her youngest son — a newly-minted physician. 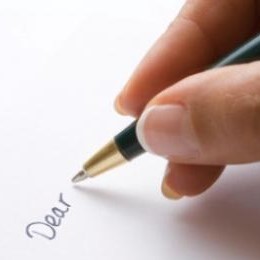 Her name was Alice Ward Kelly, my father’s mother. Dad had earned his MD degree from the Long Island College of Medicine on December 13, 1943 (the day before his 25th birthday). Due to the nation’s pressing need for physicians during World War II, dad had completed his medical education in just 3 years rather than the traditional 4 years.

My grandmother’s letter, which I found among dad’s personal papers after he died in March 2007, offers a profound message on what it means to be a physician. And clearly, she was proud of her own efforts on his behalf.

My father always said that his mother was the major force in his life. With a lot of love and a lot more determination, she drove her sons to success. I’m told that even when her two children were young boys growing up in Brooklyn, she would say about them: “here’s my doctor and here’s my lawyer.” And it was to be.

“Men are what their mothers made them.”
—Ralph Waldo Emerson

My dad became a physician and his older brother, Thomas Ward Kelly (the two were born exactly 53 weeks apart), became an attorney. My Uncle Tom was a senior partner at a top New York City corporate law firm and served as chief counsel for the Girl Scouts of America for many years. He died in June 1993.

After graduation from medical school, my father served as a U.S. Navy officer during WW II. He was a ship’s doctor aboard a LST in the Pacific theater. My grandmother died in June 1955 at our family home in Monmouth Beach.

With the nation enduring a health crisis, here is the letter that my grandmother wrote to my dad upon his graduation from medical school just around the holidays.

Merry Christmas and all my love and best wishes — 1944 will launch you on a very serious career. I wish you so many things; I hardly know where to begin.

I’ll start with “Patience.” I wish you lots and lots of that — you will need that quality in great abundance. Also kindness and gentleness — a true gentleman always wants these, but a doctor, well, they must have them.

To all that seek you — the sick and suffering — I hope your hand, heart and mind will always be set to soothe and heal. Sympathy and understanding mean much to all who are ill.

Keep your feet firm on the ground — a physician’s life is not easy. It’s serious and hard work — always try to treat each one as your own regardless of race, creed, color or position. The worthwhile doctor is the one who can do this.

Again, all my love and I wish you happiness, good luck and a career that will be a credit to you and me too.