I was born at the shore and have never lived more than 500 yards from the ocean. Can’t say I ever want to leave. A walk on the sand or a dip in the ocean has the rarest of rare uplifting power for me and so many others. Both energy and peace can be found at the water’s edge. Life there feels better. 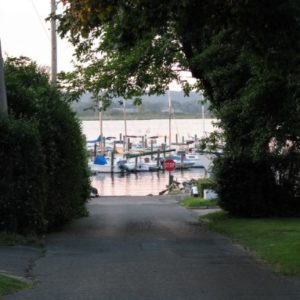 It’s in my genes too. My parents loved the shore life. Dad was a lifeguard on Long Island, NY beaches for many summers and the first chance he got, he moved his family and his medical career to the Jersey Shore in the early 1950s. It was a very smart move. Mom grew up spending many happy summers at  “The Reservation” just over the border in North Long Branch (now Seven Presidents Oceanfront Park).

My sister, one of the hardest working persons I know, summed it up best: “I never feeling guilty when I’m relaxing at the beach,” she told me once. It’s true. And from a scientific standpoint, just recently Michigan State University researchers found that “increased views of blue space is significantly associated with lower levels of psychological distress.”

“The sea, once it casts its spell, holds one in its net of wonder forever.”
—Jacques Cousteau

As we await another fine summer at the Jersey Shore, I maintain that owning a beach house is worth it. Even a modest beach house can offer life-fulfillment. Realtor.com recently released a report ranking America’s best bargain beach towns. The list of “Most Affordable” beach towns includes two New Jersey communities with one being in Monmouth County.

“Some of our top picks won’t ring a bell, but that’s a good thing — they’re less likely to be clogged with tourists, hoity-toity neighbors, and overpriced ice cream cones,” according to Realtor.com editors. “In other words, you’re practically guaranteed a peaceful seaside getaway. Possibly one with lots of upside potential on the resale side.”