It has survived fires and floods, withstood decades of storms, salt air and wicked winds. It sat rotting for eight years — unused and unloved. The state wanted to make it a parking lot for beachgoers. And yet, it still stands.

The spot is a shining beacon — in wooden grandeur — in this very fine coastal town. Situated in the borough’s Galilee section, to me there’s nothing quite like it on the Jersey Shore. Just driving past the place brings me joy and pride in having played a part with so many others in seeing that it endures. Saving this building and making it into what it is today represents one of the borough’s finest displays of teamwork. 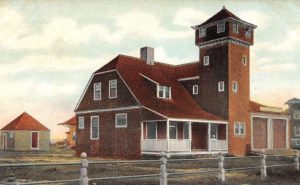 The Monmouth Beach Cultural Center — many call the “heartbeat of the town” — is open every Wednesday to Saturday from 10 am to 2 pm. Under the terms of the lease with the New Jersey state DEP, free parking and free beach access must be provided at the location.

I’ll remember forever an April 1999 evening when the newly reconstituted Monmouth Beach Historical Society voted to undertake the very challenging task of saving what was the old U.S. Life Saving station. From that gathering began the journey to preserve the borough’s oldest public building. The structure dates to 1894 — it’s is a Duluth-style station designed by George Tolman. Wealthy industrialists George Fisher Baker and Edward Walton donated the land.

Our small group never thought preserving the building would be easy — but we believed in the cause. As the group’s president, they all looked to me for leadership at the time. During many discussions with my family and friends about the effort, I got the feeling that if the borough’s most historic building was torn down on my watch, the Monmouth Beach fates might never forgive me. Our little historical society identified the goal, helped build awareness and provided inspiration to save this “home of heroes.”

Of course, the history buffs knows of the brave efforts of the men who were housed there. Three separate “sentinels of the shore” have called the building home — the U.S. Life-Saving Association, the U.S. Coast Guard and the N.J. Marine Police. In truth, the building would certainly haven fallen to the wrecker’s ball if not for the philanthropy of Jay W. Ross. No doubt about it. Mr. Ross, a longtime borough resident who died in 2006 at age 90, donated over $110,000 to the redevelopment cause.

The day he said to me — “Kelly, I’m gonna help you on this one” — was one of the happiness days in my entire life as a Monmouth Beach person. I wasn’t surprised, though. “Jay always put his money where his mouth was — others just talk,” the late Sidney Johnson, he basically ran Monmouth Beach for 40 years, once told me.

“Culture is the arts elevated to a set of beliefs.”
—Thomas Wolfe

Even with the funding, the project still needed a person of action to see that the rehab was done properly and a person of order to see that it was run properly. In further evidence that Monmouth Beach is blessed, a couple of wise borough police chiefs stepped up big-time to help — Patrick J. McConville and Richard L. Keller.

Pat, the town’s top cop from 1995 to 2002, managed the renovation project with great care. I watched as he held together a fragile coalition of supporters, while doing much of the physical renovation work himself. Thanks to him and his all-volunteer team of workers, an ambitious 6-month long renovation project changed a decaying century-old building into a grand coastal showplace. 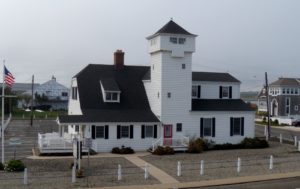 Pat recognized the building’s symbiotic importance to the people of Monmouth Beach when it was just days away from meeting its doom. Regarding the project’s success, he once explained to me that “the planets all aligned on this one.”

Next came Chief Keller, the town’s longest serving police chief from 1972 to 1993, who started as the first MB Cultural Center director in May 2000. Right away he would set high standards and insisted on the same from others.

A true borough history buff, his talent for creating and leading a team of volunteers set the project on a steady path. When he retired from the director position in 2009, he gave me one of the finest complements I ever received in thanking me for my “friendship and support” during the time we served together on the center’s Board of Trustees. Chief Keller died in July 2011 (More on him HERE).

Inspired by his father, Richard S. Keller got deeply involved in the cultural center in the 2010s. His dad would be proud of his efforts to keep the place going. Employing patience, persistence and an awesome networking coalition, Dickie has helped to preserve the building in the face of two serious complications. After Superstorm Sandy wrecked the building interior in October 2012, his team quickly restored it; after a major fire in September 2016 and subsequent bureaucracy kept the building closed for 18 months, he got it opened once again.

Current MBCC director Lois Geyer and the Keller team continue to set the fine conditions — welcoming over 75,000 visitors since the center’s doors first opened — hosting hundreds of community events, art shows, cultural exhibits and musical concerts. I’m sure it will only get better. 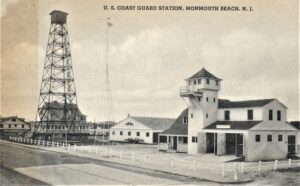 The location itself has a rich history. Prior to the May 2000 reopening, the rundown building and unkempt property had been dormant ever since the NJ State Marine Police abandoned it after a disastrous December 1992 nor’easter. They had been there since 1964. The building also housed the U.S. Coast Guard for nearly 50 years.

I was inspirited to get involved after reading about the heroic efforts of U.S. Life-Saving Association and the men who were housed in that building. In the mid-1800s along the 10,000-mile U.S. coastline, the area between Cape Cod (MA) and Cape Hatteras (NC) had the most terrible record of shipwrecks. It was known as the “Graveyard of the Atlantic.” Of this region, the New Jersey coast was notoriously the worst.

In the early 19th Century, a growing American population and demand for goods increased the need for shipping vessels, both U.S. and European. During those times transatlantic shipping was at a record high and all sorts of vessels transversed the waters off New Jersey. Back then ships navigated by the sun, stars, moon, and the horizon. Thousands of passenger and commercial ships moved up and down the Jersey Shore and an alarming number of shipwrecks occurred.

The first U.S. Life-Saving station was formally organized in November 1854 after the infamous wreck of the “New Era” off Asbury Park. In later years, after the invention of the Marconi wireless and reliable steamships, wrecks were less common. Still, for 60 years shipwrecks and surfmen (as members of the U.S. Life Saving Service were known) shaped the history of our coastline.

Lifesaving service crews, such as those housed in the Monmouth Beach Station #4, were revered as the heroes of the Atlantic Coast, routinely risking their lives in grand maritime rescues. Their work was remembered in story and song back then, but today’s society has largely forgotten the great sacrifices these men made to save others.

The preservation and restoration of the MB Cultural Center is an ongoing tribute to those brave men. 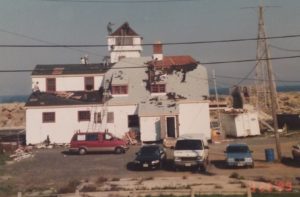 Note: As to the building’s historic accuracy, local historian-author Randell Gabrielan sums up the spirit quite neatly. According to his 2011 book, Monmouth County Historic Landmarks: “While not interpreted as a historic site, the center lines its walls with historic images and demonstrates that historic structures can receive a second life compatible with their historic past.”