The foot of Broadway is just over a mile from the Monmouth Beach-Long Branch boarder. A lot of borough families can say they did business on Broadway all through the years. 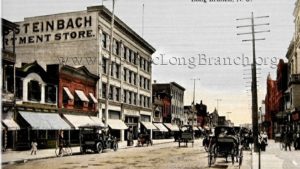 I worked on Broadway for parts of 20 years. There I was employed by the once grand (now almost forgotten) Atlanticville newspaper. Work at 184 Broadway was seldom boring. I got to see a whole lot. This was a  newspaper that was plugged into the community. And the publishers frequently made a positive difference in the city.

From our downtown offices I discovered that Broadway wasn’t for the meek — then or now. And so for Broadway to be reborn a lot of the right things must happen. That I found ample pride and responsibility there during my many years working on Broadway, it emboldens me.

It was in 1985, recently graduated from Monmouth College, when Atlanticville owners Michael and Shannon Booth (she’s my sister) offered me a chance to learn the newspaper business and grow as a person. And grow I did, performing every task from delivering newspapers in the rain to interviewing the Governor.

There I found an occupation and learned that I was good at something. I also believe that Broadway should always be a place where fair commerce rules. Where risk is nurtured and rewarded, good hospitality and products are apparent, and folks are in a satisfactory buying mood.

The Long Branch I remember makes these dreams always a possibility. I hope so much the place where I began my business career can have a magnificent future. It’s certainly within reach.

The past is wondrous enough. My mom shopped on Broadway and her mom and her sisters did too. I recall well Vogels Department Store (my first elevator trip there was eerie), W.H. Woolleys (where my parents thought Mr. Woolley sold fine clothes and personified integrity), and lunch at J.J. Newberrys (pictures of my mom dining there with her first grandchild always gets me).

First map recorded in 1835, first paved in 1891 — Broadway was where Long Branch conducted commerce. Back in the glory days, Jacob Steinbach and his grand department store building ruled, you could buy a car on Broadway, two theaters brought historic innovation and star power, and City Hall was just up the road.

In sad decline for too many years, today most of lower Broadway building-wise has been removed from existence. Leveled flat in 2018. The city got millions in back fines and taxes to begin the lower Broadway project. It’s still an empty slate.

The plan, according to the Asbury Park Press, has Long Branch Partners, Inc., the majority land owners in the area, spending “$200 million revitalizing the long-rundown Lower Broadway corridor with apartments, stores and parking decks.” The hope is to “resurrect the city’s downtrodden historic main drag.”

The project seeks mixed-use buildings containing nearly 600 market-rate rental apartments and nearly 100,000 square feet of retail space. Monthly apartment rents will be about $2,000, the Press explained. Finishing off the project, the developers will provide plenty of parking and a realigning of the historic ‘five corners” roadway. The city is on the hook for $5 million bonded for their end of the road work.

Both me and my family have seen the able efforts of neighboring shore cites in becoming more business friendly — Asbury Park, Red Bank and Sea Bright being admirable examples (there are others). I willingly return there, again and again, waiting for their goods and services. Successful downtown-type retail businesses that are serving their communities well. There are positive stories to tell in our area. These prospects are fully within the grasp for a deserving Broadway business corridor.

It won’t happen fast though. The current U.S. retail market is much troubled, facing a long overdue reinvention of itself. And it’ has been that way for a long while. Forget trying to impact the LB city’s supply of business vacancies, there are spots on Madison Avenue in Manhattan facing a troubling glut of empty storefronts.

Historically, the location is the Long Branch shore at its pinnacle. Point of coastal greatest. Land where Long Branch “Entertained a Nation.” A lot to live up to. Redeveloping the neighborhood of Broadway was never going to be an easy job. Lower Broadway still has grit. Only it’s lost stature awaits return. All this could play well in the new world of “experiential retail.”

Regrettably, there wasn’t much meaningful discussion in the recent city campaign about what just will happened with Broadway, or at least lower Broadway, as the multi-million dollar project moves along. It’s important to determine which businesses might prosper in the “bricks and mortar” world of a new Broadway?

Perhaps a microbrewery or maybe a B&B? Certainly a good coffee shop. Space for quality local theater, music and art is a must. The city could support a high-end steakhouse. A rare item/book store would draw local explorers. A  health-care component is necessary. The massive growth of the pet culture should get some attention. Something to celebrate the city’s impressive history should be included. How about a bakery? Area residents still rave about the defunct City Bakery on Broadway.

The chamber of commerce must plant a stake there and I even like the idea of a small school in the neighborhood.  And the many other fun things that come from lots of foot-traffic with the ocean only a block away. Sidewalk cafes and quiet alcoves should be included. The architecture needs to mix well and be representative of the city’s delightful diversity.

I would love to hear more ideas for suitable Broadway businesses in comments below or on Facebook. Thanks.’ type=’text/javascript’>