The all-volunteer Monmouth Beach Fire Company — proud of its century-long dedication to protecting the lives and property of its neighbors — actually predates the borough.

With only an idea to create a borough fire company, several area residents met at the Willow Grove House on Fresh Pond Road (now Riverdale Avenue) on September 29, 1905. Prior to creation of the borough’s fire company, the town had relied on the services of the Oliver Byron Engine Company in North Long Branch.

In 1906, a firehouse was built on the corner of Beach Road and Borden Street. In 1919, the company bought land next to borough hall for $50 and moved the firehouse to its present location near borough hall. 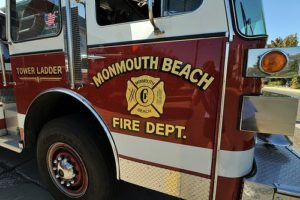 By 1916, again thanks to public donations, the company had its first motorized fire-fighting apparatus. In 1921, the borough council made another sizable contribution to the fire company with the purchase of a pumper fire truck, a 750-GPM American La France.

The company’s first major fire was in the late spring of 1909. The Mahahan Livery Stable on Beach Road burned down but several surrounding buildings were saved by the firemen.

For an early alarm system, a large gong and sledge hammer was replaced by a large Sears, Roebuck bell atop the firehouse in 1910. The bell tower was removed in 1919.

According to fire company records, “the greatest fire in the history of the town” occurred on December 26, 1929, when the Monmouth Beach Clubhouse Hotel on Beach Road and Club Circle burned. The building, the old Wardell Farm House, had been a popular resort spot for years. Firefighters fought the blaze through the night for 12 hours.

“When fire is cried and danger Is nigh, ‘God and Firemen’ is the people’s cry.”
—The Fireman’s Journal, 1879

The fire company bought its first Scott Air Packs in 1962 replacing the outdated mining safety masks. In 1946 the company and borough chipped in to buy a 500-gallon the Mack Fire Truck, which is still around today. In 1963 the MBFC bought a new Hahn fire truck for $25,000. In 1981 it acquired another pumper truck. The company added new pumper trucks in 1995 and 2005. A major fire at the Channel Club Tower in 1985 convinced borough officials that a tower ladder truck was needed; by 1987 a 100+ footer from Stuphen was part of the company line.

In 1989, the Clarence B. Cook Firefighter of the Year award was created, in recognition of the longtime fireman and borough official. Also that year, Jaw W. Ross donated $55,000 for the construction of a fire compnay museum in the back of the property. 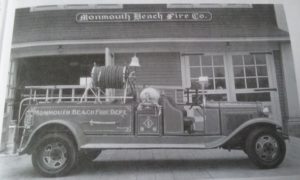 Community Spirit
The borough’s fire company started distributing toys on Christmas Day in 1946. Gift-wrapped toys are home-delivered to all borough children, infant through Grade 4. The MBFC is one of the few, if only, area organizations to deliver toys on the actual holiday.

The MB Firemen’s Fair is a town summertime fixture dating to the late 1930s. Great stories abound over the years of family and friends enjoying the annual event. Who can ever forget throwing curtain rings on Coke bottles? Or a ride on the Mack? For years the fair was held at the firehouse, but Hurricane Sandy damages forced its move to the MB Bathing Pavilion on Ocean Avenue.