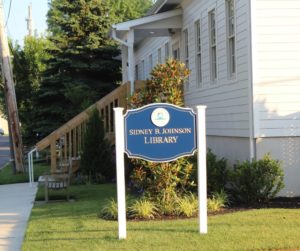 An informal public library in Monmouth Beach got its start in Borough Hall on Beach Road in March 1925, when the borough council gave permission to a group of volunteers and the Monmouth County Library (that system was created in 1922) to use a single room off the second floor balcony. Even today, many borough residents remember the 81-square-foot room.

For many years, the county also had a visiting bookmobile. During those humble beginnings, all the librarians were volunteers and often traveled to the county library in Freehold (then in the basement of the Hall of Records) to make exchanges for new books. During the 1950s, Christian Gaarder served as the borough’s librarian without pay. Mr. Gaarder, a voracious reader who wore a jacket and tie to work every day, retired when he turned 90. Other early dedicated volunteers were Lavinia Ireland, Dorothea Bremer, and E. Ray Smith.

It wasn’t until 1937 that a sign was posted outside of borough hall informing the public of a library inside. In 1956, a bad fire in borough hall closed the library room for a year.

In October 1961, the Momouth Beach Library Association was formed. A month later the library room was modestly expanded and a reference section was added. Library hours were increased from two hours on Saturdays to 10 ½ hours over four days. The volunteers all participated in purchasing, processing, and cataloging more books. By 1971, library hours had expanded to 16 hours per week. Today, it’s open about 35 hours per week.

In 1962, the library association approved the hiring of its first paid librarian, Margaret “Peg” Heath. She would hold the post for longer than anyone else, 30 years. That same year, the first Book Fair and Story Hours were held in Borough Hall. In April 1964, the library association was incorporated and they elected a six-member Board of Trustees; George Chertoff was a longtime trustee. 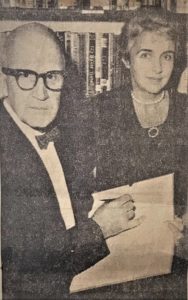 Thanks to many generous donations of funds and books from the MB School PTA and others, the library was sustained through its early years. “The borough has always been very supportive of the library,” said Lucy Nilson, who chaired the Association for some 40 years. After many years of enduring a cramped space, the library association began a push for its goal of a new facility. In 1965, architect Albert Benoist was hired to design a new library building. In February 1967, the borough commissioners approved a bond ordinance and a new 2,000 square-foot library building was constructed for $42,000 on Willow Avenue in back of Borough Hall.

The library association purchased new equipment and furniture and the Shade Tree Commission provided the landscaping. The building was dedicated and opened in July 1968 (by then it had over 2,000 books).

In October 1990, a new library wing donated by Jay W. Ross, a longtime generous benefactor, was opened. Mr. Ross called libraries “the life blood of a community.” The complex was renamed in honor of former mayor and commissioner Sidney B. Johnson, a longtime library association member.

Presently, the library building and grounds belong to the borough and its contents are the property of the library association. In 2006, the MB Library Association president was Shelley King and the library held nearly 50,000 books and media items. Nancy Leporatti served as the Director of the Library for 16 years, until her death in 2008.

Like many other structures in town the low-lying library building was decimated by Hurricane Sandy in October 2012 — nearly 3 feet of flood water filled the building. According to Library Director Judith Bakos, nearly 15,000 books were destroyed in the storm and the items that didn’t get wet were contaminated with mildew.

Thanks to $300,000 in borough bond financing, the newly renovated library on Willow Avenue was reopened in October 2016 and offers many of its previous as well as new information services. The building was also raised to guard against future flooding. 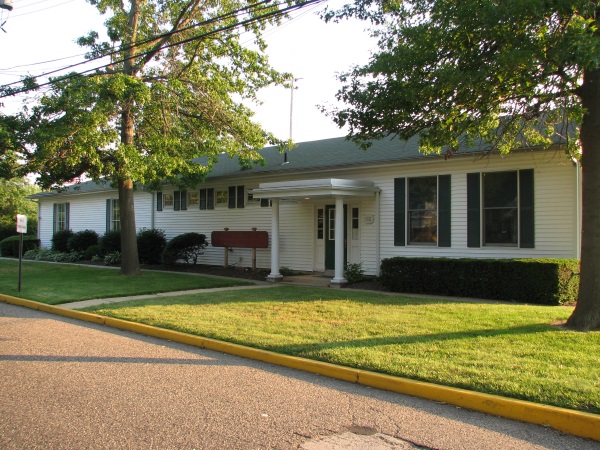