On March 9, 1906, Monmouth Beach was officially incorporated as a borough by virtue of an act signed by the N.J. Secretary of State, J.D. Dickinson. Although known as “Monmouth Beach” as far back as the early 1870s, it really wasn’t official until 1906.

From its settlement beginnings in 1693, the area called Monmouth Beach was considered to be in Shrewsbury Township; by 1849 it had become part of Ocean Township (the MB area sometimes appeared as “Wardell’s Beach” and “Fresh Pond” on maps).

According to a May 1905 New York Tribune report, the resort area known as Monmouth Beach was then governed by Ocean Twp., which had its headquarters in Long Branch. That year for the first time Monmouth Beach was free to decide on its own improvements as well as being given a representative on the township committee. It was Jesse P. Manahan. 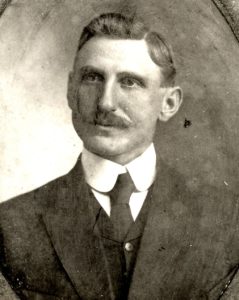 On April 3, 1906, the first formal election in Monmouth Beach was held. The form of government the town started with was a partisan mayor and council. Democrat and Republican candidates ran for mayor, six council seats, assessor, recorder, collector, justice of the peace, and commissioners of appeals. Fewer than 125 people cast ballots that spring.

The Democratic ticket swept the new borough, led by William Heitzman (1874-1948) who won the mayor’s race by a 64-57 vote over Republican Jesse P. Manahan (who would return in 5 years to win another race for mayor and serve until 1916).

“If voting made any difference they wouldn’t let us do it.”
—Mark Twain

The mayor-council type of government in Monmouth Beach prevailed until September 1929, when borough voters approved a referendum (by a 184 to 163 count) to change to a non-partisan commission form of government, which still operates today. Under the new form of government, the mayor would be paid $750 per year, and two commissioners got $500.

Seven candidates ran in the first MB board of commissioners election in October 1929. Just under 400 residents voted. John J. Campbell (225 votes) was the first mayor after the change, even though he was second in the vote to Samuel Cooper (251 votes).

In an odd twist, all three members of the newly elected borough commission had names beginning with the letter C: Mayor Campbell and Commissioners William Carhart, and Cooper. As a matter of fact, the name of first borough clerk under the new government was also began with C, Beatrice Cooper. And Councilman Edward McDuffy, who had strongly advocated for the change in government, finished last in the field of candidates.

Today, the town operates under the Walsh Act, where a three-member commission rules municipal government. Each commissioner oversees a department; currently: Public Affairs, Public Safety & Public Property; Public Works & Parks; and Revenue and Finance. Borough commissioners serve for 4 years and the mayor is selected by a majority vote of the commission.

Note: I close this post with the thought that I’d really like to see the town’s governing body gets a pay raise — after some 45 years. Agree with them or not, admit that they perform overwhelming and under appreciated jobs. The current compensation is absurd and a modest bump is far too long overdue. I suggest, $5,000 for the mayor and $2,750 for commissioners; with a COLA every fourth election. I’d like to hear other thoughts …