New SBBP — a Symbol of Hope 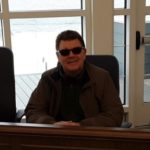 Councilman Rooney in the new SBBP.

The name of the new building will be the Sea Bright Beach Pavilion. And it’s another magnificent symbol of rebirth for a dynamic Jersey Shore town. I live here now and have learned of Sea Bright’s charms.

So from the devastation of Hurricane Sandy, when many thought Sea Bright near dead, comes a big, bold and beautiful new borough facility — all situated hard by the Atlantic Ocean. Sea Bright doesn’t cede territory without a fight.

I got a recent tour of the new $4 million seashore facility from Sea Bright Councilman Charles Rooney, III (we are SRHS classmates). Located at 1097 Ocean Avenue, the opening of the 8,600-square-foot facility has been much anticipated among locals.

Charlie, a borough councilman for nearly 5 years now, explained that it took lots of vision, team work and patience for the dream to become a reality. His pride of place was unmistakable throughout my visit. Credit is also due Mayor Dina Long, current councilmen Marc Leckstein and Brian Kelly, and former Councilwoman Peggy Bills, Charlie explained, “they all made it happen.”

“We were set up for success,” Charlie told me. Thanks to a sizable FEMA grant and strong voter approval of a construction bond, he called it the town’s best chance to create a modern public building. After my tour I think they got the job done and with the greatest of shore views too.

Charlie and I spoke about the tremendous water views from the building’s multi-purpose public room — indeed, from sight-lines all over the property — on the top floor. He suggested the “Peninsula Room” as a name for the area — in honor of the once spectacular, now gone Peninsula House hotel that was just up the beach. 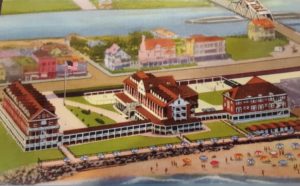 The Peninsula House in its glory days.

Known by locals as the “P House” — the landmark structure dates to Sea Bright’s late 19th century glory days. After many years of decline, Mary Weir acquired the property in 1979 and restored lots of the luster to the P House. She sold it in 1983 to seek other interesting business opportunities in NYC. Constructed in 1884; the majestic building burned down amid rumors in the fall of 1986.

I have had the good fortune to work with Mary in recent months as members of the new Sea Bright Historical Society and have found her to be a delightful lady — brimming with energy, intelligence, ideas.

The Sea Bright Borough Council has already held meetings in the new building — so now it’s borough politics with a great view. The main room on the third floor is spacious and bright. You can even roll out the council dais and open up the spot for other events or meetings. Always, with the great view. It’s a room in which to celebrate. Other towns will be envious.

Councilman Rooney’s father, Charles, Jr., was the town’s mayor for a decade and served on the borough council for twice that long. Lots of service, lots of experience. From my days as editor of the Atlanticville in the early 1990s, I recall then Mayor Charlie Rooney as a leader tenacious in his advocacy for Sea Bright. He took the mayor’s seat when the town really needed him.

He was a fighter — had to be. The mayor once told me that in addition to all the other things he had to do, no other NJ mayor battled the tides more than he did. Even remarking after another brutal Sea Bright storm that the Atlantic Ocean “was out to get him personally.”

The facility will also house a new Sea Bright Library on the second floor as well as the borough’s beach operations. Ever since Hurricane Sandy wrecked their old building in October 2012, the library has been operating out of the Methodist Church across the street. Monmouth Beach philanthropist Jay W. Ross had donated the funds for the original library back in 1993.

My first visit to the new library confirmed it’s a grand sea of learning — in so many ways. Besides the undeniable serenity offered up by ocean-view reading (yes, lounge chair-reading by the seashore tops most things) comes a Wi-Fi computer bar, a kid’s beach-themed reading room, and it’s all managed by a smart Monmouth Beach resident, Jane Farmer. As a local writer I can’t wait to partake of its creative comforts.

On the building’s east side rests a 2,500-square-foot deck on top of the new seawall. There’s access down to the beach. Once again, all the views are breathtaking.

The building officially opened in the spring with expanded hours: Mondays to Fridays from 10 am to 5 pm and on Saturdays, from 9 am to 1 pm.

Best of luck to the new SBBP and all its grand plans.