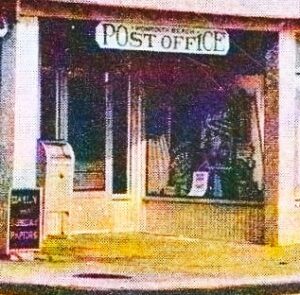 In April 1924, John A. Wheeler opened the first United States Post Office in town at the corner of Beach Road and Riverdale Avenue (then known as Fresh Pond Road). It was housed in his building with an adjoining general store-luncheonette. Postmaster Wheeler, along with his wife Anna, ran the business for 28 years until 1952. He died the following year at age 70. A Vermont native, Mr. Wheeler was known for his stern yet principled New England ways.

In early town years there were no letter carriers; residents had to come to the post office to collect their mail, making the corner location a minor gathering spot. A.O. Johnson was famous for “holding court” there during his four-terms as borough mayor. Home delivery of mail didn’t begin until March 1965 with the official numbering of borough homes. The borough’s first postmen were Michael Heath and Patrick Germano.

Shortly before his death in 1953, Mr. Wheeler sold the property to local businessman and fellow fireman, Edwin O. Peterson, Sr.; the deal was reached during a card game. Peterson then rented the store to Walter Bloom (the father of longtime Borough Clerk Bonnie Moore). William H. Kittell became borough postmaster in 1953, he was a former letter carrier and a WW III veteran.

Laura “Dolly” Bradley — a grandmother at the time — became town postmaster in February 1955. Appointed by President Dwight Eisenhower and confirmed by the US Senate, she would keep the job — often arriving for work before dawn — until retiring in June 1978. Mrs. Bradley was also a community leader — founder of the MB School PTA and charter member of the MB Fire Company Ladies Auxiliary (and a terrific athlete too: she starred on the 1927 Asbury Park High School state basketball championship team and was a perennial women’s golf champion at Old Orchard Country Club). A NYC native, she passed away in April 2001. She’s part of a family legacy of public service. Her husband, Bill, was a borough clerk and a 24-year MB School board member; her son, Bruce, was a respected borough public works commissioner for nearly 20 years.

“Neither snow nor rain nor heat nor gloom of night stays these couriers from the swift completion of their appointed rounds.”
—US Postal Service motto

In October 1962, a new US post office — moved east up Beach Road into a new building — was opened. Triple the size of the original post office, it included room for about 600 mailboxes. Built by Robert Farro of Long Branch, it was owned by John LoPrete of Monmouth Parkway. The building also housed two apartments on top and room from a nearby store.

In August 1964, the Monmouth Beach Deli & Liquors was opened in the same building on Beach Road. Little Silver residents Fred Bruno and Bill Geroni were partners in the deli. They acquired the business from Hansen & Germano, Inc. who had taken over from the Koch family, who had operated a store across the street for many years. William Koch’s Grocery Store stocked meat and dry and canned goods and had the town’s first liquor license.

In October 1985, Jerry Primavera, a leading area builder, and his son Thomas received town approval to build the Village Square at Monmouth Beach mini-mall off Beach Road. The old post office and deli building were razed.

The development included a 26,700-square-foot retail and office building and a one-story post office. The construction cost was $3 million and businesses opened in 1987. Although somewhat controversial during its proposal, today the location is a beehive of activity — boasting several businesses and a busy US Post Office. 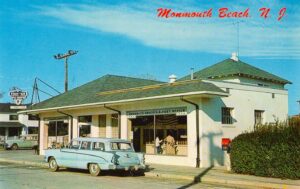 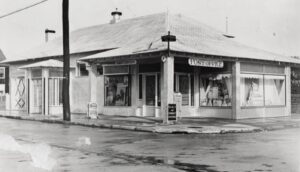 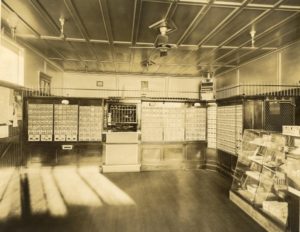 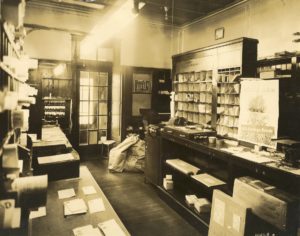 MB Post Office, 1950s. Opened by John Wheeler in 1924 who also operated a store at the corner of Beach Road and Rivedale Avenue. 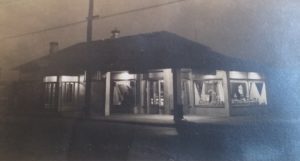 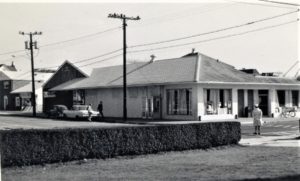 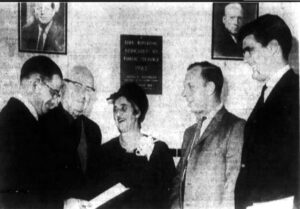 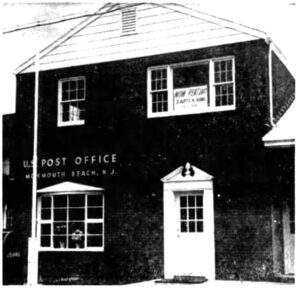 MB Post Office on Beach Road at the time of its dedication, APP Photo, October 1962. Laura Bradley  was postmaster then. 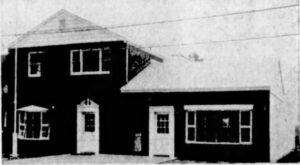 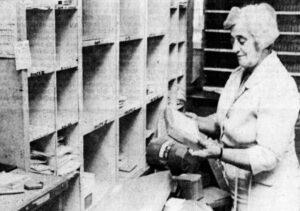 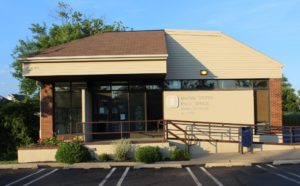 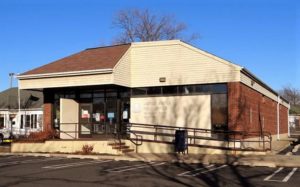