Few more magnificent structures have ever graced the Jersey Shore.

The Octagon Hotel in Sea Bright began as a  private cottage built by Mifflin Paul in 1870 for his daughter, Sarah Sandt. As the Victorian oceanfront hotel underwent major additions — the south wing in 1876 and the north wing in 1880 — it becamce the largest hotel in town. Total construction cost was about $100,000, according to the Long Branch Daily Record. The property remained in the Sandt family until it was torn down in 1914. 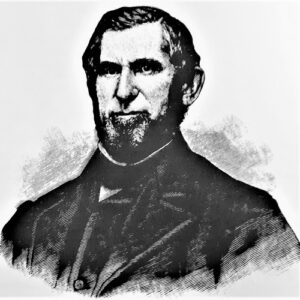 Born in Mount Holly, NJ in April 1836, Sarah Sandt was also a physician, graduating first in her class from the Women’s Medical College of Pennsylvania. She died in February 1898. Her husband George B. Sandt (Sarah was his second wife, wed in 1867) was the manager/owner of the hotel for many years. Born in Pennsylvania in 1830, he served in the Civil War and was an early leader in Long Branch education. When he died in September 1909, their son, George M. Sandt took charge of the hotel (he was also a Red Bank mayor).

Without Mr. Paul, Sea Bright probably would not exist in the form it is today — he plotted it out. In June 1869, he bought the land that is now Sea Bright from Dr. Arthur V. Conover (who also owned all of Monmouth Beach too) for about $5,800. Conover, who’d been a Freehold physician, bought the tract for $5 an acre in 1865 from the heirs of Major Henry Wardell, the great-great grandson of the area’s first settler, Eliakim Wardell.

Born April 1814 in Moorestown, NJ, Paul was a busy man. He also managed the construction of the first Sea Bright-Rumson bridge, the Long Branch and Sea Bright Turnpike (that’s present day Ocean Avenue), and the Long Branch & Seashore Railroad. He died in April 1889.

The borough of Sea Bright has a rich shore history. One of the best and most thoughtful resources for local shore history was the late George Moss, Jr. The Monmouth County historian and author of eight books on Jersey Shore history, he died in 2009. His 1990 book, Another Look: At Nauvoo to the Hook (Ploughshare Press), is a marvelous literary and visual portrait of shore life in Guided Age times, roughly from 1860 to 1900.

According to the Moss account, the Octagon could accommodate up to 500 guests and also had “a 150-foot ocean pier that supported a restaurant and bathhouses for summer guests.” The hotel catered to the rich and famous until it was decimated in a triple-winter December 1913-January 1914 series of Nor’easter storms.

(Note: Paul also built the Peninsula House for his other daughter, Martha Dederer, in 1881). 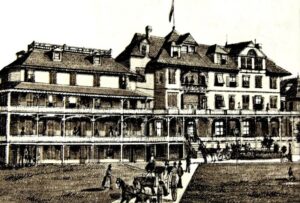 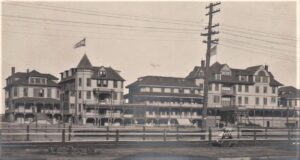 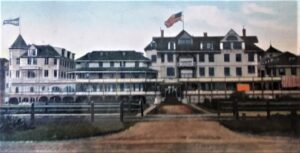 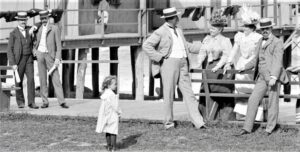 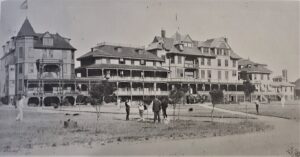 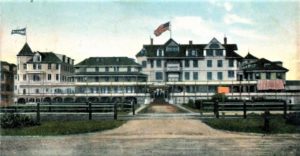 Octagon Hotel in ruins after storm, 1914. George Sandt was the owner at the time.

Octagon Hotel in ruins after storms, 1914. 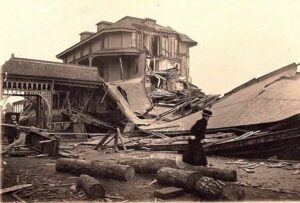 Octagon Hotel in ruins after storm, 1913-14. Storm winds were said to have cleared 120 mph, according to the Red Bank Register. 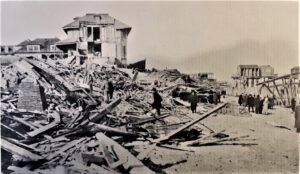 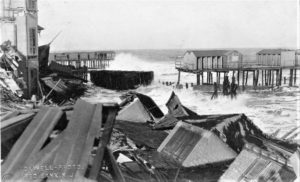 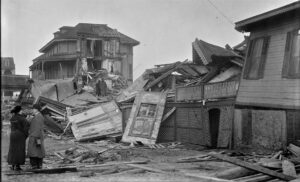 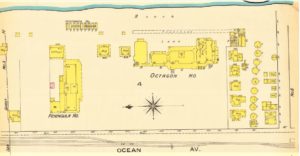 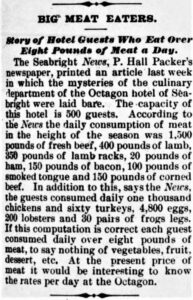