Called a “pioneer resident” by the Long Branch Daily Record, Conover J. Gaskin, Sr. was born in New Bedford, NJ (part of Wall Twp.) in 1862 and came to North Long Branch in the 1880s.

As a new century dawned, there Gaskin would build the county’s first cold storage plant on Ocean Avenue — a rather big deal in a growing fishing community. In 1911, it was mostly lost in “a rather mysterious” fire. He also worked in the area’s pound boat industry. After he died in April 1939, the family name would become synonymous for seafood and service he started in the city.

Generations of area residents — like me, who lived a town north in Monmouth Beach — remember the scene: two wooden buildings set just off Ocean and Seaview Avenues in North End with gaudy ad signage; an occasional “big catch” for display outside. Just oozing with rustic seashore charm. And good quality seafood for the buying, even the “Lemon Ice” was just right. Behind the scenes was a longtime feud between two brothers over licensing and naming rights.

The business was was left to his sons, Conover, Jr. (born in 1906) and George L. (born in 1909), when Conover, Sr. died. According to an August 1982 Asbury Park Press story, “an intense competition and dislike” between the brothers started in 1941 with competing side-by-side fish market stores and later in courtroom battles. The divide lasted until Conover, Jr. died in March 1960; George L. lived until July 1976. Although one Summer of ’46 afternoon (see story below) must have bound them.

Going back to the 1930s, the family also operated “Gaskin’s Beach” — 550-foot wide just south of Joline Avenue — offering parking, lifeguards, bathrooms, concessions, and a couple houses for rental through the seasons. The city condemned the buildings in 1973 and Monmouth County acquired the land in 1975. It’s now part of Seven Presidents Oceanfront Park.

Other Gaskin family members tried to make a go of a big sit-down seafood restaurant and opened a 170-seat fancy eatery in June 1978 across the street from the old markets. It operated on and off until 1984. When George C. Gaskin (son of George L.) sold the remainder of his family’s landmark property in January 1986, he told the Asbury Park Press: “creating a landmark is great for the ego but not always great for the pocketbook.”

The mini-plaza along new Ocean Blvd that replaced Gaskin’s never really worked. The WindMill restaurant anchored the spot for some 30 years until the building was wrecked in January 2019.

Ocean Holdings Dev, LLC acquired the land for $3 million in 2017. With city approval 26, five-bedroom luxury condos are going up there now. Called “The Reef” — each townhouse unit in the community offers “panoramic ocean views” and 3,100 square feet of living space. Plus, two pools and two-car garages.

(And some history about the nearby “Reservation” property — HERE) 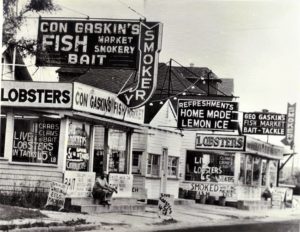 “Gaskin’s Smokery” stores — side-by-side in the 1950s. About 60-feet separated the brothers and their fish markets. 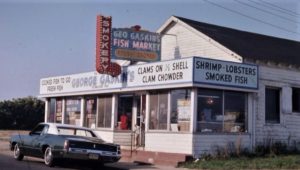 George Gaskin’s Fish Market, early 1970s. In April 1975, his son George C. Gaskin won a $228,000 settlement from the city for his land in North End. The area would become part of Seven Presidents Oceanfront Park. 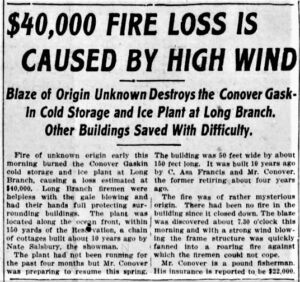 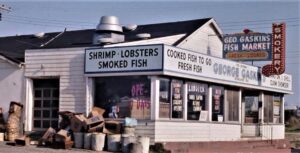 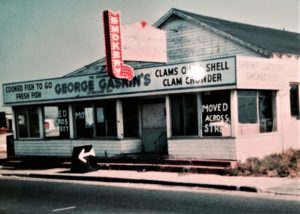 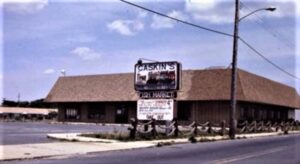 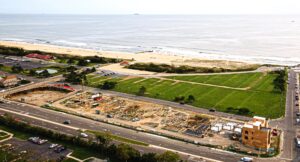 Whatever their differences, the Gaskin brothers did act together heroically to save the life of a youth in seashore distress. Asbury Park Press, June 1946. 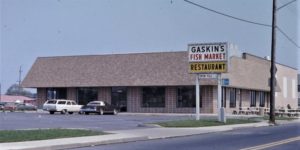 Gaskin’s Fish Market, early 1980s. Part of the building was the huge old freezer which could store up to 1 million pounds of fish. From 1950 to 1979, the family stored and sold bait.

The Windmill building, 2010s. It had been the Gaksin’s restaurant building. 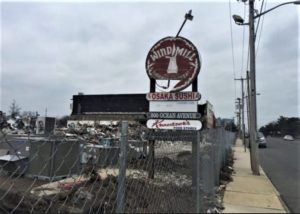 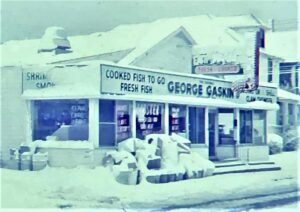 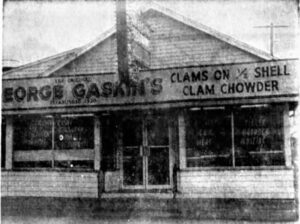 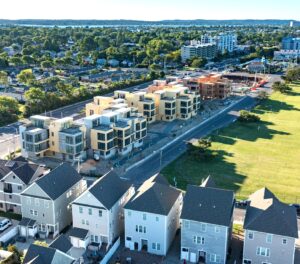 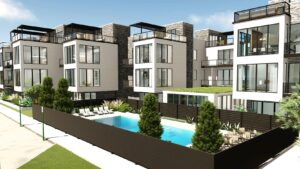 “The Reef” in North End, 2021. Each unit spans 3,100-square-feet of living space, and has a private two-car garage, private elevator, private balcony, and private roof deck — all with “a world-class panoramic ocean view.” MORE INFO. 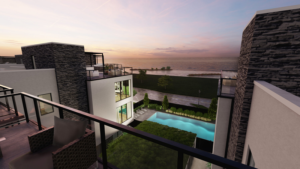 Rooftop view of the Atlantic Ocean from “The Reef” in North End, 2020. 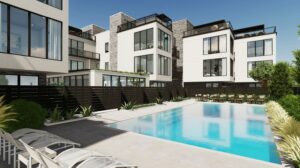 “The Reef” in North End — by the pool, 2021. A local realtor told me the units are selling briskly — with a recent top price reaching $3.5 million.