Today, few people remember and even fewer know that Monmouth Beach was once a thriving commercial fishing village. While many local anglers still regularly cast off borough beaches, the practice as a business is now gone.

Situated mainly in the “Galilee” section of town (located roughly from the Sea Bright border to Central Road), the fishing trade is a colorful and vibrant part of our local history. Back in the day it was called “harvesting the sea.” Hardworking and strong, Galilee fishermen were mostly of Scandinavian heritage. Combined with the busy Nauvoo fishing village in Sea Bright, our shore area was perhaps the largest pound boat fishing industry along the U.S. coast in its day. 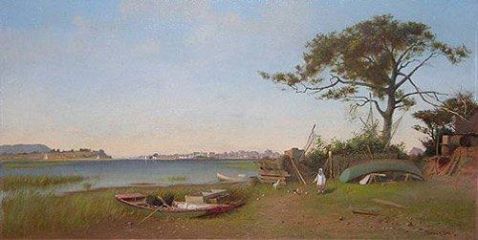 Francis A. Silva oil painting of Galilee in 1880.

In the Beginning
Borough native Captain Steward Cook claims to have established the first pound fishery on the Jersey Shore in 1875 at Galilee. He ran it until his retirement in 1926. During winter months, he worked with the U.S. Life-Saving Service. Cook was born in Monmouth Beach (then called “Fresh Pond”) in 1847.

Much of the fish caught off local waters was shipped to the Fulton Fish Market and sold. Writer Gustav Kobbe, in his majestic 1889 book, The Jersey Coast and Pines, called these coastal fishing communities “the only ones of their kind” in the country. According to Kobbe, area fishermen would catch 9 million pounds of fish during an average 150-day season. In the late 1880s, fish sold for about 3 cents per pound. “Bluefish, bass, weakfish, blackfish are caught in plenty … these with crabs and clams abounding in the waters make seafood abundant and cheap,” wrote Kobbe.

Launching their massive cedar boats right into surf off the beaches at daybreak, the fishermen’s work “may be over before their fashionable neighbors have any thought of rising,” according to a Harper’s Weekly report.

Having first purchased land from Dr. Arthur Conover in 1870 for $500, the Galilee Fishing Association was chartered in March 1884. Despite some ups and downs, the glory days of commercial fishing and storage in town would last into 1960s. The peak was probably in 1903 when a small train station was built in Galilee and fish was transported up north daily.

By 1909, the association was employing 125 men (“no womenfolk in the fishermen’s Galilee”). Pound boat owners paid men $25 per month along with room and board. Captains, in charge of an 8-man boat, got $75 per month and room and board. Nearly all the fishermen were “blue-eyed, light-haired) Scandinavians. A season was May to December. A good day was 100,000 pounds caught.

In later years, a spur for loading fish was added. In the summer of 1917, a serious accident occurred in Galilee when a southbound express train struck a loaded gasoline truck. The massive explosion took the lives of the locomotive engineer and the truck driver. Three coaches of the train, the railroad station, and a surrounding field were all burned.

In July 1940, Pat Maney, a borough police and fire chief, won an amateur photography contest sponsored by the New York Herald Tribune for his photo of the majestic pound boat, Anna Marie (a painting by Gail Gannon of the scene hung for years in borough hall). 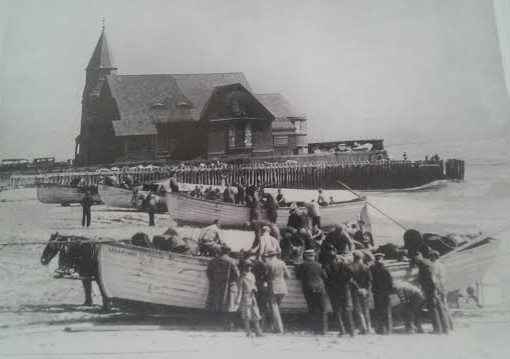 A line-up to buy fish from pound boats with St. Peter’s Church in background.

Hard Work
Pound boats — 33-feet long and weighing a quarter of a ton — were made of cedar and oak cost $85 to build back in the day. These massive floating hulks were built and maintained at nearby Jerolamon’s Boat Works. Founded by Abram Jerolamon in 1876 and run later by Willard and then Harold Jerolamon, they also built yachts for the local wealthy, including for George F. Baker and William K. Vanderbilt.

Starting well before dawn, 6- to 8-man crews would launch boats directly into the breaking surf. The pound nets were anchored to the ocean floor and bypassing fish would be caught in the nets. The men would clean the fish on the way in, as leaving fish guts on the beach was frowned upon.

After the day’s fishing, a team of horses (later tractors were used) would pull the vessels ashore. The fish were placed in large wicker baskets and taken to nearby icehouses — in the area that are now borough streets, Icehouse Road and Drew Court. The ice was cut in large chucks from the nearby Shrewsbury River and Manahasset Creek during winter months and insulated with salt hay, sawdust, or burlap for future use. There the catch was stored — there wasn’t refrigeration.

The practice was that “if you caught fish you made money, if you didn’t catch fish you didn’t make any money.” The rule was that the boat owner took one-third, the boat captain got one-third, and the crew got one-third. The variety of fish caught included Bluefish, Weakfish, Whiting, Ling, Porgies, Tuna, and Butterfish.

Family names synonymous with the fishing industry in Monmouth Beach include Cook, Peterson, Koch, Woolley, Lockwood, and Johnson. And it appeared that collegiality prevailed. According to a November 1891 Harper’s Weekly report, “a brawl in Galilee is almost unknown, all are living closely on the best terms. The fishermen are trusting and trustworthy, for nothing is ever stolen from the boats, left exposed with all the implements of their trade.”

“There is  something in angling that produces a serenity of the mind.”
—Washington Irving

In 1873, the fishermen built their own house of worship on Ocean Avenue, the Episcopal St. Peter’s of Galilee Church. Operating only during the summer, after years of storm damage the structure was moved to the westside of Ocean Avenue for more protection in 1933. It was finally taken by fire in May 1955.

The Lockwood family — known for hard work and community involvement — first opened a fish market on the east side of Ocean Avenue in the 1890s. A 1953 storm washed the building from atop the seawall. Across the street, the family built a new store. Under different owners, it operated until the late 1970s.

In 1912, Abram O. Johnson, a four-term borough mayor, started the Monmouth Beach Cold Storage Company (where the Monmouth Commons is now). After his death, his son Sidney (mayor from 1949 to 1978) took over the business and managed it for 30 years. The facility survived a major fire in 1972, saw business decline in the late 1970s, and closed in 1983.

Fish was frozen and stored at the facility off Riverdale Avenue and eventually shipped to the Fulton Fish Market in Manhattan. At one point, the Johnsons were freezing more than 2 million pounds of fish each year. Winfield West was the long-time business manager for both Johnsons. Many borough youths picked up a few bucks working as  “freezer rats” through the years, with some young men calling it “Monmouth Beach University.” 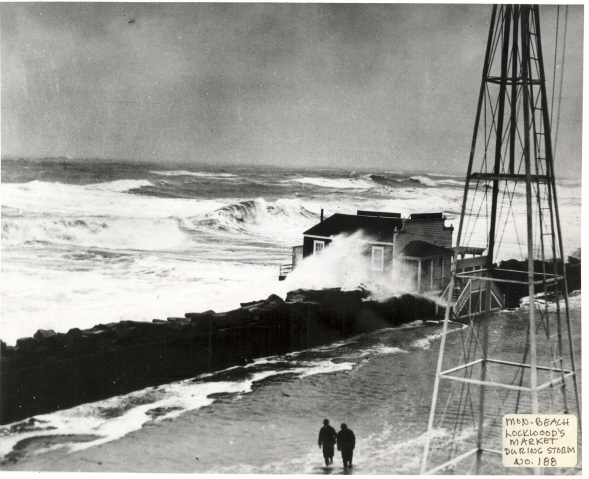 Family Business
Born in Sweden, Oscar Peterson came to Monmouth Beach in 1887 and later got into the pound boat trade. In 1930, he started a wholesale sea food business on Wesley Street; the business would last two more generations. In the 1920s, his wife Hilma had pedaled fresh fish door-to-door. Oscar died in June 1952.

His son, Edwin O. Peterson, Sr., known for his entrepreneur ways and marketing flair, took the family into several new businesses. He formed Peterson Enterprises in 1954, which included fish freezing and storage, bait fish and ice supply, shrimp supplies, and land developer among others. The business moved to Park Road in Galilee in 1958. A former MB fire company chief, he died in January 1973.

Edwin O. Peterson, Jr. took over the business that year. He took to selling packaged ice during the summer months; some weekends selling over 10 tons of ice. A borough commissioner and fire chief, E.O. ran things until 1986. The land was sold, the aging buildings were razed, and new homes were built in 1997.

After World War II, the team of Al Ferrugiaro, Edwin “Nick” Woolley, Harold “Skeets” Peterson (a borough commissioner), and Ed Koch got into the fish trade and ran a successful Wesley Street business up until 1983.

Arthur Petersen, Sr. started the Shrewsbury Fishery in the late 1920s and operated it until 1960. Born in Norway in 1903, he came to Monmouth Beach in 1928. A man known for his work ethic and good business sense, he owned much of the land in Galilee for many years. 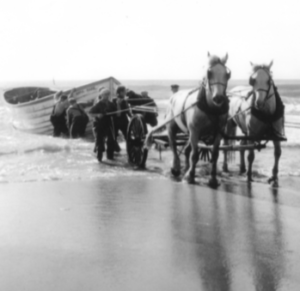 Pound boat (Anna Marie) is hauled onto the beach by horses and fishermen. (Photo by Pat Maney)

Some Challenges
The fish business was tough in more ways than one. Through the years, according to a New York Times report, the influence of organized crime at Fulton was never far away. And right here in Monmouth Beach the hijacking of a NYC-bound fish truck was occasional (once at gun-point).

In the late 1800s, when Monmouth Beach was growing as a shore resort for the rich and famous, the fishing business began to face challenges. Wealthy and connected neighbors living in the mansions on Ocean Avenue started to complain about the early morning noise and fish smell.

The issue came to a head in 1928 when the Monmouth Beach Association, a group that owned much of the borough’s properties, filed suit to stop the practice. Among those opposing the fishing was James Beck, a Pennsylvania congressman and former U.S. Solicitor General, who owned a summer home on Ocean Avenue.

The wealthy residents claimed under the 1877 Monmouth Beach Convent: “there would be no hotels, saloons, slaughter  houses, or other enterprises which might detract from their pleasure at their palatial residences.” The Chancery Court ruled in their favor, and while the practice went on, the days of commercial fishing in town were numbered.

In 1962, the Asbury Park Press reported that the last two official fish catching businesses in MB to fold were the Coast Fishing Company (in 1950) and the Shrewsbury Fishery (in 1960). In neighboring Sea Bright, according to former Monmouth County historian George Moss, beaches had 280 fishing boats in 1904; by 1949 just half a dozen remained.