It’s hard to narrow down a real name? It opened as Ocean Park in 1934 and shut down as Long Branch Stadium in 1957. In between, it was called City Stadium, Municipal Stadium, Memorial Stadium, Garfield Stadium, Ocean Park track and Long Branch Speedway. Lots of re-branding efforts for a concept that never really worked.

Located on a prime piece of Long Branch ocreanfront — its boundary was Broadway, Ocean Avenue, Laird Street and Abbottsford Avenue. The property had once held the magnificent Ocean House hotel — the largest in the country in its day.

Back further, according to a 1928 Long Branch Daily Record account, the area had been the farm of Dr. Elisha Perkins before he sold to developer Samuel Cooper in 1831, who opened “Cooper’s House” which by the following year was a hotel that could hold 175 guests. By 1872, the spot was a large hotel that would flourish during the Long Branch summer resort craze.

After the hotel was torn down in 1905, the 10-acre area became Ocean Park. As part of that new development, the Long Branch Casino was opened in 1907 (designed by Clarence D. Wilson and built by Richard H. Hughes for $50,000). After burning in a “roaring” early summer fire in June 1928, Mayor J. William Jones called it a “failure.”

Later on the spot was developed by the Long Branch Kennel Club led by Myer Goldberg, the club president. He invested $150,000 on a new steel grandstand, sand track, lighting, and drainage and landscaping. In July 1934, the oceanfront facility opened — as a quarter-mile greyhound racetrack. Staffed by 200 employees; with mechanical rabbit too. According to the Long Branch Daily Record, “Cheerful Dick” won the feature dog race on Opening Night.

Thought to be the fastest of all dog breeds, greyhounds have been clocked at speeds up to 45 miles per hour. In a 1934 Long Branch Daily Record profile, Goldberg offered a brief history of dog racing, saying it all began with the Ancient Egyptians. The man responsible for bringing it to America was Oliver P. Smith, who came up with the electric bunny idea in 1910. After early interest (250,000+ visitors the first season), the idea faded when greyhound wagering was declared illegal in New Jersey.

The city took over the complex in 1936 and leased out or held various events over the years, including: more auto racing, some football, night baseball, several Pooch Parades, and boxing and wrestling. By 1949, the Atlantic Stock Car Association was racing four nights a week in the summer (NASCAR had been formed in 1948). Capacity grew to 7,000. Among the top drivers were: Lou Volk, Frankie Schneider, and Johnny Cabral. The facility also held the Sportsman Bar run by Nicholas Cammerano and Joseph Catalano.

Even as late as June 1961, the Monmouth County Firemen’s Day event was held on stadium grounds. The mayor of Palermo, Sicily was the guest of honor.

As the “ramshackle” arena fell into decline, at the end of 1958 city commissioners were considering a tear down. By February 1962 it was all gone. The spot was later called Garfield Park in honor of the slain US president who died in Elberon in Sept. 1881. Today, the land holds the Ocean Place Hotel and a parking lot for same. The hotel developers, William J. Maloney, Sr. and Jr., acquired the property from the city in October 1987 for $1.6 million. 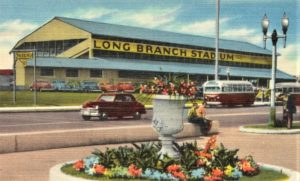 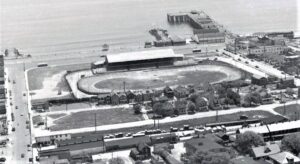 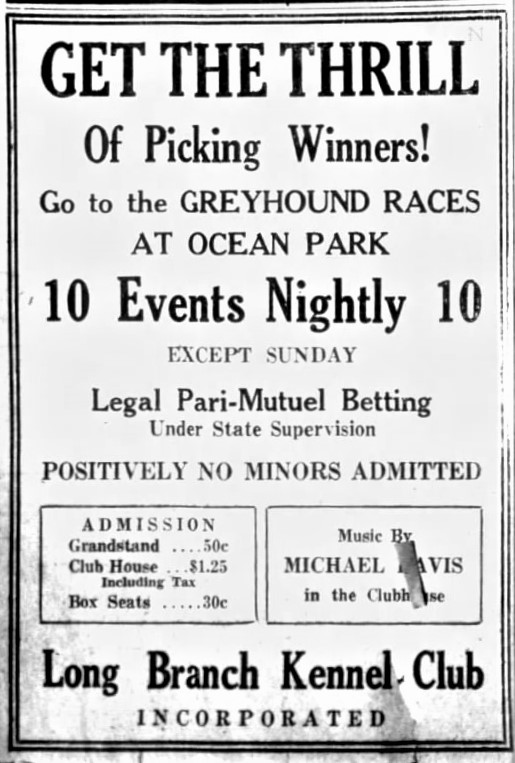 In the beginning — it opened as Ocean Park. Long Branch Daily Record, July 1934. 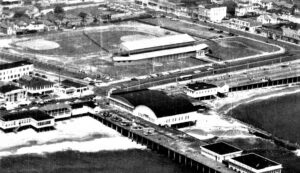 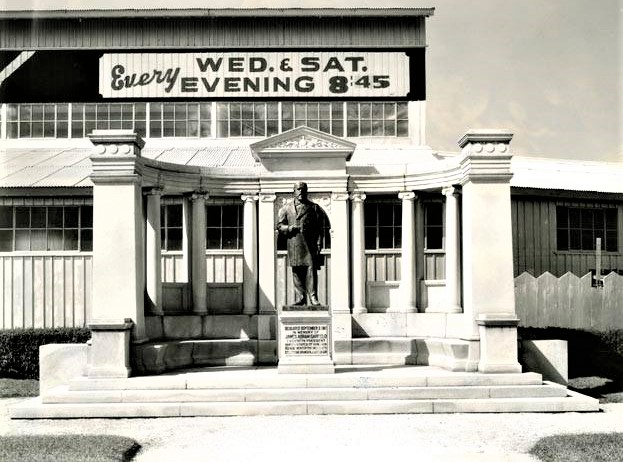 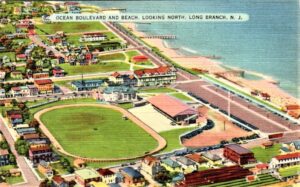 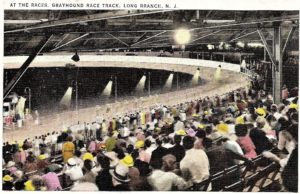 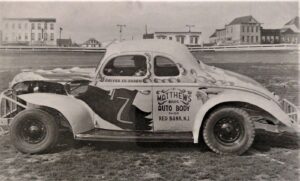 Driver Ed Soden in his stock-car at Long Branch Stadium, 1950. 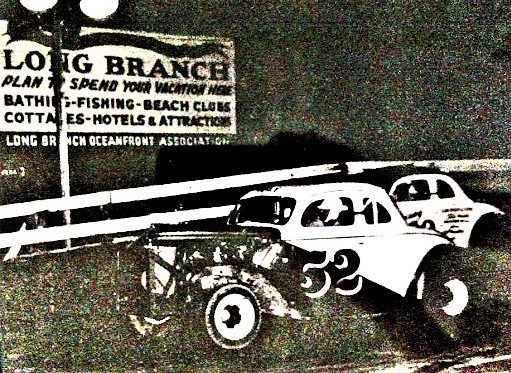 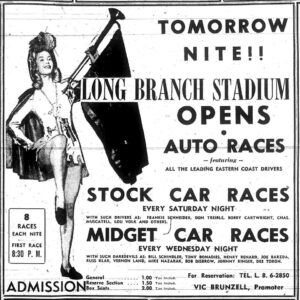 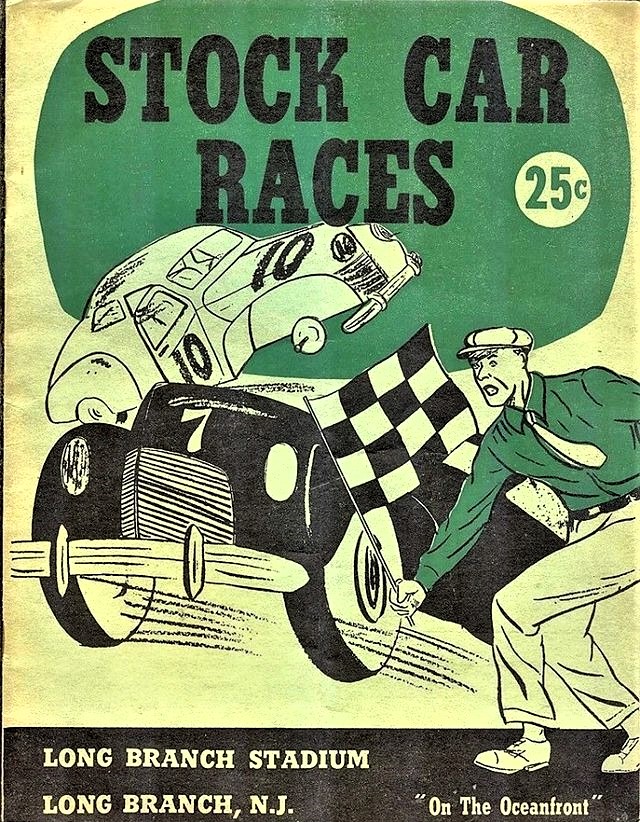 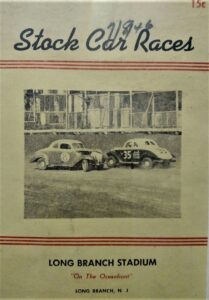 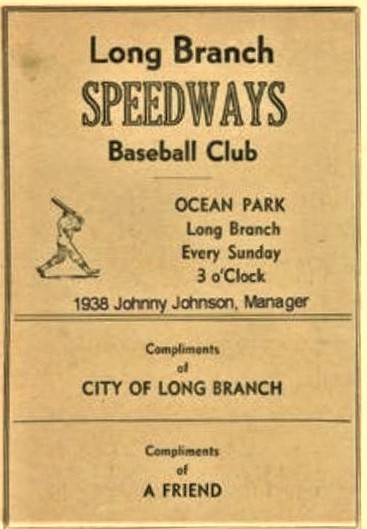 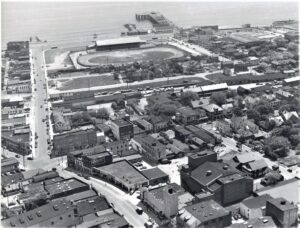 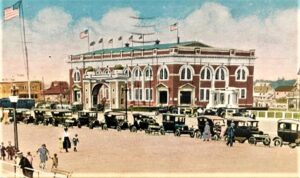 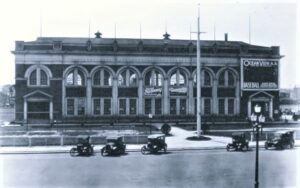 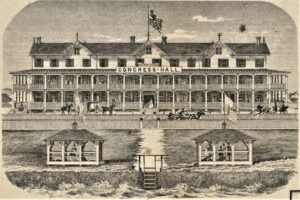 Congress Hall at Broadway and Ocean Avenue, 1861. Famous for its “Congress spring water from Saratoga,” it later became a section of the massive Ocean Hotel. 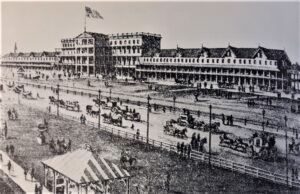 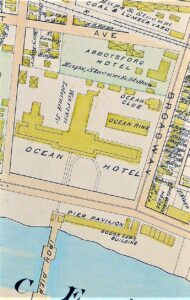 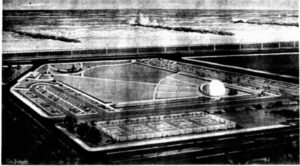 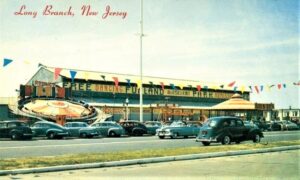