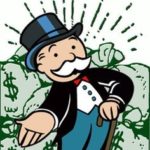 Beginning back in the late-1800s — thanks to the advent of a shore-area railroad system and a train station in the borough — Monmouth Beach became a secluded resort for the rich and famous — built on land once nothing more then sand-hills and marshes.

Just as the last summer of 1800s was beginning, according to a New-York Tribune report: “Nowhere along the Atlantic Coast is ‘exclusiveness’ in its broadest sense enjoyed as it is at Monmouth Beach.”

Things mostly started in 1871 with the formation of the Monmouth Beach Association — a group of very rich men who sought to create an exclusive resort along the Jersey Shore. The owners wanted to make the spot a “select place” for people of “unquestioned respectability.” Many wealthy and well-known families made their homes here in town during those glory years — mostly during the summer season. Their dwellings were the massive cottages that dotted the coastline. Ocean Avenue was popularly known as “Millionaires Row.”

Here is a famous names and families list — all who lived in town at one time or another:

• Anthony Q. Keasbey — A lead member of the 1871 Monmouth Beach Association (the wealthy syndicate that developed the town), he was also the longest serving United States Attorney in American and New Jersey history. Appointed by President Lincoln in 1861, he served until to 1886. Born in Salem, NJ, he died in 1895.

• Noah Swayne — In 1878, he and his wife and Sarah Ann bought a Monmouth Beach house from Jay Gould for $3,000. Swayne is the only Quaker and first Republican to serve on the US Supreme Court. Appointed by President Lincoln in 1862, the Ohio lawyer served for nearly 20 years on the High Court. 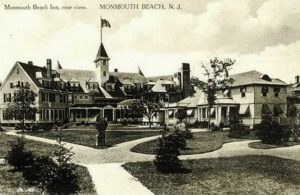 • John McKesson, Jr. — Founder and co-owner of McKesson Robbins, a major US pharmaceutical company. Today McKesson is a diversified health-care company with about $200 billion in annual sales. He owned several pieces of property in town and lived in a large house south of the MB Club. 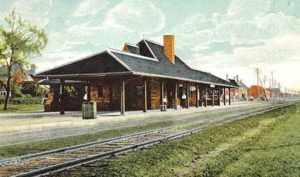 Depot to the wealthy.

• Guglielmo Marconi — The inventor of the wireless telegraph system, which helped bring on modern radio. The first to transmit a wireless signal in 1895, he stayed in the town’s Galilee section around then and used the U.S. Life-Saving Station for his  experiments.

Note: My thanks to borough resident Gail Gannon who helped compile the list. She is much-admired for chronicling of old-time Monmouth Beach through her historic paintings.