A Look at the LBPD

Like most law enforcement agencies — they’ve been both admired and reviled. Brave and weak. Skilled and sloppy. Just like the rest of us mortals — they are imperfect. But the big difference is the police must do an impossible job (plus, face death every shift).

So while Long Branch remains the “Friendly City” — local cops must get a fair share of credit for keeping necessary order through the many years. From the beginning it hasn’t been an easy job. The Long Branch Police Department (LBPD) came into being just about the time a President of the United States decided to spend summers in town. Making for demanding work right away.

Organized in 1868, the LBPD started with just one policeman (called “marshal”), Cornelius Van Derveer. An early Long Branch true-believer, by June 1873 he’d been appointed to the Long Branch Commission. The five-member governing body created when the town was incorporated as a borough in April 1867. Prior to that, Van Derveer had been a member of the Ocean Township Committee. And he helped build the Church of the Presidents in Elberon.

“Blessed are the peacekeepers, for they shall be called the children of God.”
—Matthew 5:9

As to department leadership, Henry Green was appointed “chief marshal” in 1870 at a $350 annual salary. The force also grew to three marshals that year. After Green retired, LBPD leaders were Joseph V. West, then Charles Pitman Lloyd, then James W. Banford, and James Layton before Long Branch incorporated as a city in 1904.

Interestingly enough, prior to 1905 police officers were elected or appointed year to year. It wasn’t until Long Branch was reincorporated as a city that cops got tenure and a more modern police force emerged — 24 patrolmen were hired that year. Back then, officers wore white ribbon badges to identify themselves. According to a January 1948 Long Branch Daily Record story on the history of the LBPD, the first official act the city commissioners asked of law enforcement was to remove a foul-smelling pig sty. 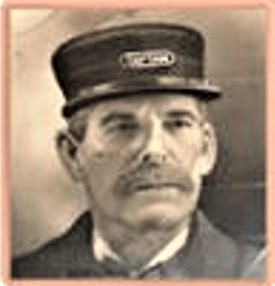 Prior to the building of a City Hall, prisoners were kept in small cells in the basement of Washington Hall on Broadway or in cells underneath the Oceanic Firehouse. The judge’s chambers were above the old Fesler Drugstore on the corner of Broadway and Second Avenue. All law enforcement operations moved into a new City Hall on Broadway in 1891. The LBPD then moved into another new City Hall in 1975 where it remains today.

The city’s longest serving chief of police was “Captain” James Layton, who was the top cop for 30 years. Beginning as a summer officer in July 1883 — he arrived when Long Branch was booming as a grand summer resort. In that age it took just 14 summer policemen to entertain (and protect) a nation. Considered a “good and great man” by many admirers, when he retired in 1918, Layton admitted that being “chief of police Is no bed of roses; far from it.” Back then the chief earned $1,320, the last one got $206,000. Born in Howell Twp., Chief Layton died in December 1924.

William Walling founded the city’s detective bureau in 1913. The Long Branch PBA was established in 1906 and the city police pension fund began in 1913. Regular evening motor patrols city-wide started in 1930. Cornelia Woolley Hopkins in 1931 became the first woman police commissioner, not only in Long Branch but in state history.

At the time of the Daily Record history story — about 75 years ago — the LBPD included 39 men: a chief, two captains, four sergeants, 30 patrolmen and two chancemen. Today’s LBPD includes about 100 police officers and annual budget near $13 million.

After 1970, the office of police chief was unfilled. According to the Asbury Park Press, the idea of a civilian public safety director came from a 1963 Grand Jury presentment during a organized crime probe in Long Branch. Mayor Paul Nastasio, Jr. officially created the post in July 1966 (under Plan A of the Faulkner Act). For the next five years the job was filled by unofficial part-timers.

In April 1971, John M. Buffin, a former NJ State Police major, was hired as the city’s first official public safety director for $18,000. Mayor Henry Cioffi made the appointment with city council approval. Called a “policeman’s policeman,” Buffin helped restore order before retiring in March 1976. In 1974 the chief of police title was eliminated by city ordinance. That chain of command lasted until 2018 when Jason Roebuck became the first city police chief in 47 years. By 2021, the chief’s post was eliminated again. Since October 2022, the Long Branch Director of Public Safety is William Broughton. 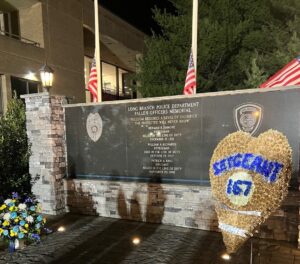 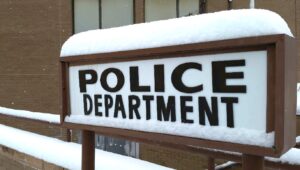 LBPD sign in back of City Hall on Broadway, 2015 (Dwayne Dentz Photo). 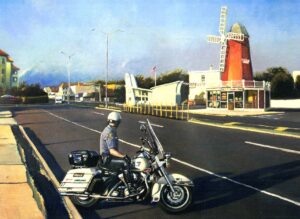 LBPD officer on patrol near the Windmill in West End, 2014. Painting by Larry Boody. 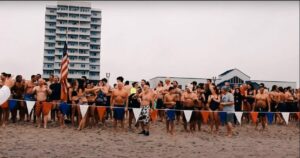 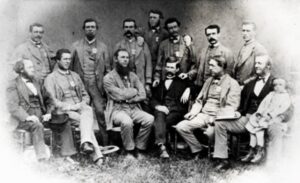 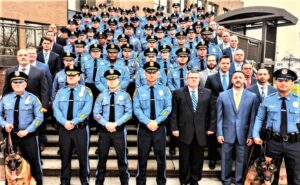 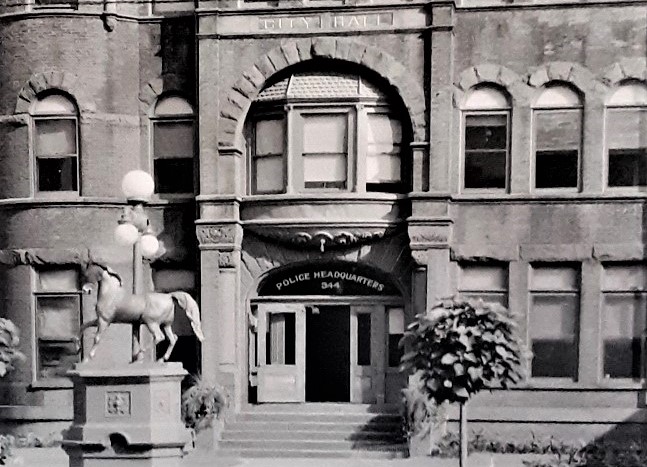 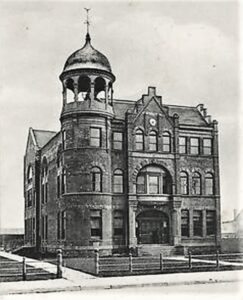 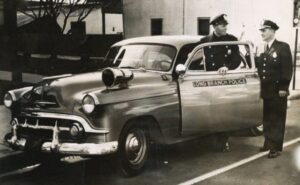 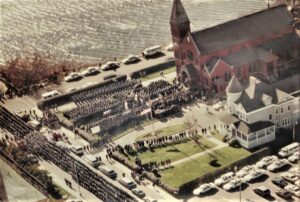 It seemed as if all of Long Branch stood as one in solemn tribute to LBPD Sgt. Patrick King — killed in the line of duty. His November 1997 funeral at St. Michael’s Church in West End touched all — helping the city with its grief. 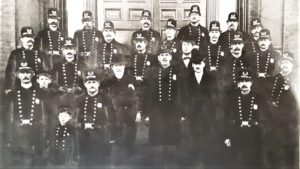 LB police force, 1895. “Mayors have come and gone, government and territorial boundaries have also changed, but Captain Layton has been continued in office,” stated the Long Branch Daily Record upon his retirement in April 1918, “and given his best to the people of Long Branch.” 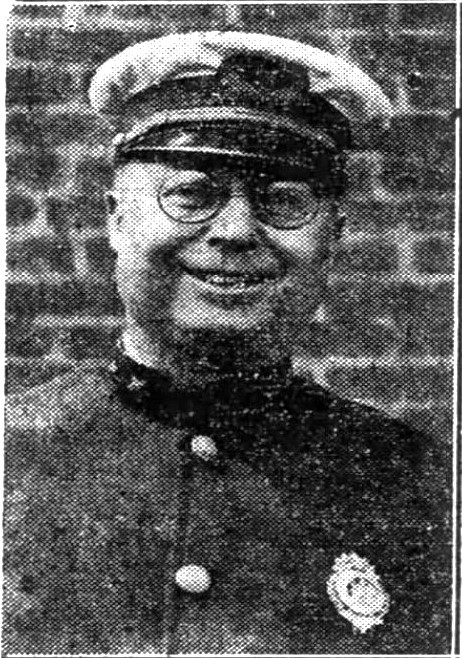 Chief William D. Walling, 1926. Born in Oceanport in April 1874, he joined the LBPD in 1901 as a patrolman. Later he founded and led the detective bureau and became police chief in October 1918. A father of seven, he died in April 1926 while still leading the force. His son, William, Jr. served 40 years as a city cop and 8 years as a city councilman before his death in 1991. 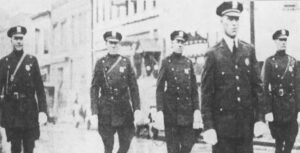 LBPD Chief Frederick A. Wardell leads an Armistice Day Parade on Broadway. Long Branch Daily Record, November 1936. Born in Long Branch in 1900, he became a patrolman in 1921 and detective Lt. in 1926. On becoming police chief in October 1933 he was the youngest in the state. Considered an innovative leader, he instituted the two-way radio, established a modern finger-print and records bureau, and required department members to take first aid training. He died in office November 1942, having recently been elected president of the Monmouth County Police Chiefs Association. 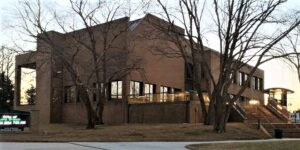 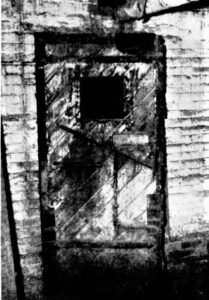 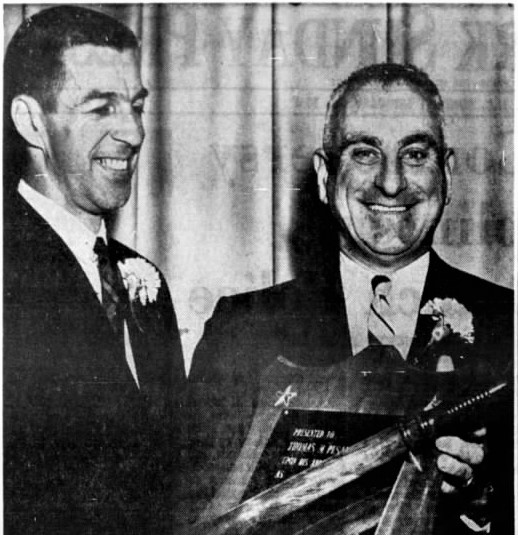 LBPD Chief Thomas Pesano (r) with Detective Micheal Irene (l) at a police department celebration. APP, Feb. 1967. Born in Poughkeepsie, NY and a 1933 LBHS grad, Chief Pesano, joined the force in 1946 just out of the US Navy. He died June 1968. 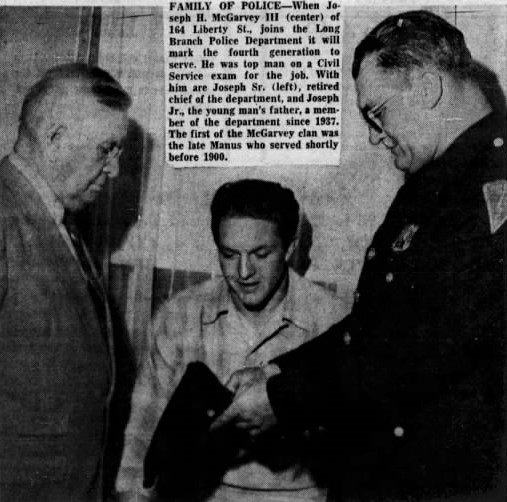 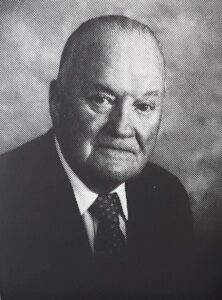 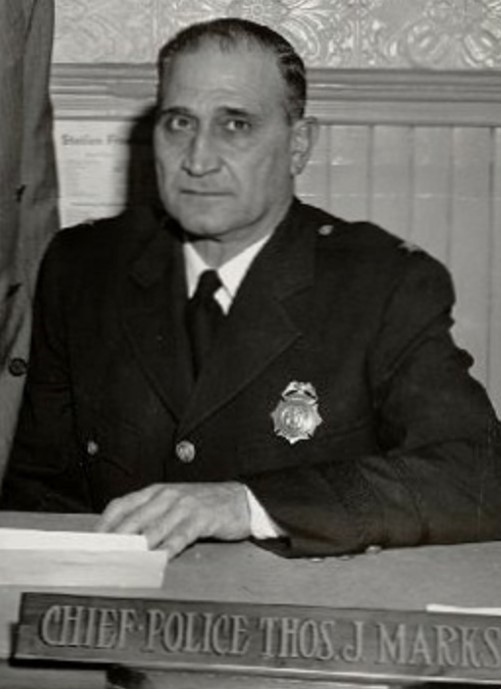 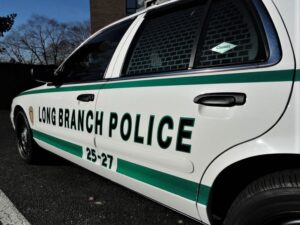