It was first known as “Nauvoo” (Hebrew for “pleasant place”). And the shore area’s very first settlers — Nathan Woolley, William Giles, and Johnty Smith — probably arrived in 1839, according to a Long Branch Daily Record story.

At that time the barrier-beach section of the north Jersey Shore included just “three huts,” was covered in “cedars and bayberry bushes,” and all roads were “mere beds of sand.” The population included about 50 men and boys. Local author-historian George Moss of Rumson believes the name “Nauvoo” was bestowed on Sea Bright by Mormon founder Joseph Smith during his missionary trip to the Monmouth County area in January 1840.

Beginning as a quaint and quiet fishing village — made up of a cluster of seaside huts — by the end of the 19th century Nauvoo was “the largest fishery on the coast.” Writer Gustav Kobbe in his majestic 1889 book, The Jersey Coast and Pines, called these coastal fishing communities “the only ones of their kind” in the country. According to Kobbe, area fishermen would catch 9 million pounds of fish during an average 150-day season. In the late 1880s, fish sold for about 3 cents per pound. “Bluefish, bass, weakfish, blackfish are caught in plenty … these with crabs and clams abounding in the waters make seafood abundant and cheap,” wrote Kobbe.

The Seaman Sea Skiff, one of the most famous boats in maritime history, was the craft of choice back then. All started by Nauvoo boat-builder Isaac Seaman back in 1841. The boats — with near flat bottoms for better movement through surf and sand — were framed in applewood and later oak.

Both Sea Bright and Monmouth Beach were part of “Wardell’s Beach” — named for original owner Eliakim Wardell — going back to 1668. He had acquired the land (about 454 acres) from the Lenape tribe for the equivalent of 4 pounds (about 11 cents per acre). Payment was in blankets, clothing and hardware for all land north of Long Branch, below Sandy Hook, and between the Shrewsbury River and Atlantic Ocean.

By October 1865, Dr. Arthur V. Conover had acquired all of what is now Sea Bright and Monmouth Beach for $30,000. The Freehold physician bought from the heirs of Major Henry Wardell, the great-great grandson of the area’s first settler.

In June 1869, Mifflin Paul paid $5,300 to Dr. Conover to buy most of the Sea Bright acreage. At that time, Sea Bright was “an undeveloped strip of sand” and not a single real house existed. The Paul acquisition, along with the opening of a shore railroad line, brought major development to Sea Bright. By March 1889, Sea Bright (then a section of Ocean Township) voted to incorporate itself, but it wasn’t until April 1896 that Sea Bright became an official, independent borough. 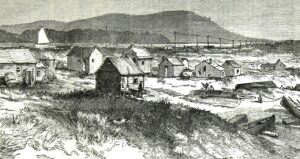 “Fishing village of Nauvoo.” Harper’s Weekly, August 1868. One of the highest elevations along the Atlantic Coast, Hartshorne Woods is unmistakable in the background.

Nauvoo fishing village in front and the beginnings of seashore mansions at Sea Bright and Monmouth Beach rising in the background, 1883. From a tiny fishing village to a top shore summer resort in a flash. 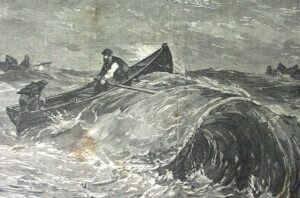 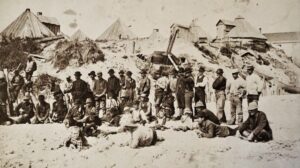 Nauvoo fishermen during a turkey shoot, 1883. 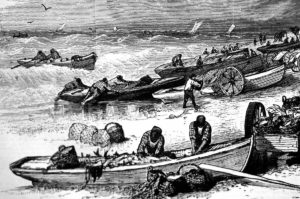 Sea Bright when it was just a small fishing village, 1873. 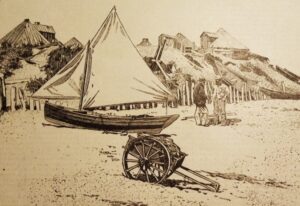 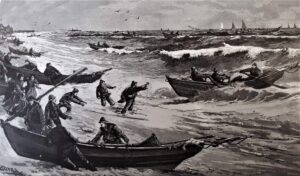 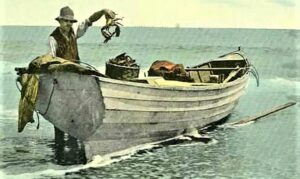 Locals could buy their seafood fresh from a fisherman’s boat, early 1900s.