End of the Railroad 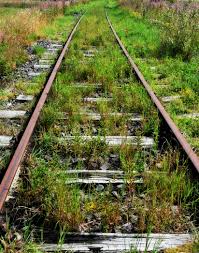 The last day of business for the Monmouth Beach Train Station was Christmas Eve 1945. Rail service was officially “abandoned” by authority of the Interstate Commerce Commission (50 years later the ICC would be abolished).

I recently found a haunting account of the end of the railroad in Monmouth Beach, coming from a January 1946 story in the Asbury Park Press by James. S. Brown. The line ran from Sandy Hook to North Long Branch beginning in July 1865 as the Long Branch & Seashore Railroad. It’s an exceptional “end of an era” tale.

What happened to the old tracks? Rail crews melted them down. Working “from East Long Branch to Highland Beach,” members of “railroad labor gangs” tore up the bulky remnants of a town’s more “colorful and carefree days.” And burnt them, or most of them, good rails were kept.

Meanwhile, the station agent in Monmouth Beach was seen cleaning out his desk and subduing a final pot-belly stove fire. Then locking up, never to return. The story claims that the Jersey Central Line was offering the station to be used as a local community club (nothing ever happened).

With some reportorial pathos, Brown offered: “There was a cold, northeast drizzle falling as I walked along the abandoned right-of-way, plowed up with the removal of ties and rails and flanked by Galilee with fishing boats and lobster pots. Waving cat tails nearly hide the twisted cables and concrete base that held a track signal at Monmouth Beach.” Now that’s a good-bye.

Hastening the end of the trains in MB was the Great Atlantic Hurricane in September 1944. In nearby Asbury Park the entire boardwalk had been reduced to matchsticks. That storm’s devastating impact (several tidal waves were reported) plus the fact that “even the auto road, which parallels the old right of way, often is underwater and impassable” spelled doom for trains in town.

Built in 1888, the MB station would stand for another decade until 1955 — today’s Little Silver station is a close match (that station was designed by  renowned architect Henry Hobson Richardson). 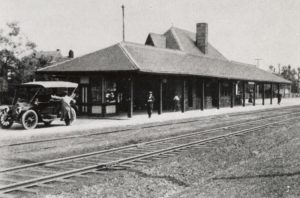 If America’s late 18th century “High and Mighty” were going to make a then remote seashore region (Monmouth Beach and Long Branch) a summer escape, it meant there had to be a dependable way to get there. And the railroad, as a conveyor of reliable travel, was just coming into its own in those years. Thankfully, New Jersey was ahead of everyone.

History records that the first commercial railroad charter in the United States was issued to the New Jersey Railroad Company in February 1815. The first shore area rail line, the Long Branch & Seashore Railroad, opened in 1865. So as the Civil War was ending, an active railroad cut through Monmouth Beach.

That first line, which connected with opulent steamboats that ported at Sandy Hook, ran along today’s Ocean Avenue and ultimately down to Toms River, mostly in the summer. The peak for the whole area was probably in 1875 when Long Branch built a large depot (at  the present NJ Transit site).

Making Tracks
The idea for a coastal rail line came from William A. Newell (he of the sterling resume: medical doctor, NJ and WA governor, NJ shore congressman, and White House physician), who pitched the idea to his friend, President Abraham Lincoln. In March 1863, the Long Branch & Sea-Shore Railroad was incorporated. It would lay the first tracks from the city of Long Branch to Spermaceti Cove on Sandy Hook where passengers connected with steamers. The first NYC-to-Atlantic Highlands boat trip took place in 1860.

By 1868, a round trip from New York to Long Branch (the one-way steamship-train route took 1 hour, 45 minutes) cost $2; by 1889 a monthly pass was $24. A steamboat of choice back then was the Keyport-built River Queen, once a favorite of President Lincoln and General U.S. Grant for secret Civil War strategy meetings.

“A private railroad car is not an acquired taste. One takes to it immediately.”
—Eleanor Robson Belmont

Thanks to that new train (“affording a fine view of the ocean and the benefit of the sea breeze,” the New York Times reported) the Monmouth Beach spot became a choice summer resort for the rich and famous. Leading the railroad development efforts in town, and around the northeast, was town resident George Fisher Baker — then one of the richest men in the country.

In 1879, the Long Branch & Sea-Shore Railroad became part of the N.J. Southern Railroad (Robber baron Jay Gould figured in this deal), which was then taken over by the Central Railroad of New Jersey in 1882. Baker, one of J.P. Morgan’s closest friends and associates, was the largest stockholder in the Central Railroad and its president. 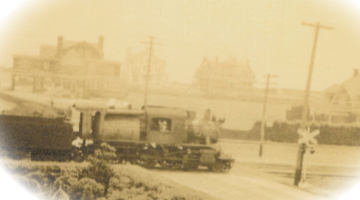 Stylin’ at the Beach
The glory years really began in 1871, when the newly minted Monmouth Beach Association sought to facilitate better oceanfront traffic and make Ocean Avenue “a grand boulevard” with magnificent “summer cottages.” The group invested $20,000 to move the railroad line west inland to present day Seaview Avenue. The goal was to create a comfortable coastal locale apart from the more popular but more harried neighboring resort city of Long Branch.

During that age, mostly from 1880 to 1910, the New York Times society pages were stocked with notices on how the well-to-do families were “now in their summer cottage at Monmouth Beach,” with the mode of travel to their seashore respite almost always being by rail. Once off the train they would be whisked away from the station in horse-drawn carriages to their stately homes, which ran along Ocean Avenue and circled the country club buildings on Beach Road. It was a postcard-like existence.

The train had two stops in town — one just off Beach Road, mainly for passengers and post; one in Galilee (E.G. Carr was the ticket agent there for many years before 1900), mainly for the fishing business. A third stop was at Low Moor, just over the Sea Bright border.

From 1900 to 1940, even with Monmouth Beach in decline as a resort, the trains still ran — with three passenger stops and one freight stop per day. In November 1941, the NJ Board of Public Utility Commissioners gave permission for the Galilee train station to be closed. The small station had been built in 1903 at the height of the borough’s fishing trade. 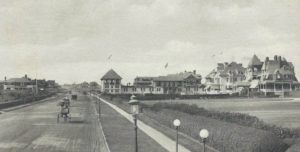 While there are stories of neighborhood houses coated with soot from the train’s coal-fired engines, only one serious “train” accident is know.  A deadly and destructive mishap took place in Galilee when a southbound express train struck a loaded gasoline truck in July 1917. The massive explosion took the lives of the locomotive engineer (Bill MIles) and the truck driver (Russ Ferry). The flames roasted three coaches of the train, the railroad station, and a surrounding field. Station Agent Roland Jerolman and 40 passengers escaped harm.

The Beach Road location had two train stations. The first  depot was constructed in 1877. A second more elaborate station — its twin in Little Silver still stands — was built in the 1888. The CR of NJ rail line was officially closed on Christmas Eve 1945 (although a November 1945 nor’easter had technically wrecked the area’s tracks). By May 1953, Railroad Avenue had been changed to Seaview Avenue  and the large slate-roof train station was finally torn down in 1955.

In March 1965, the six-mile stretch of Ocean Avenue from the Highlands Bridge to the MB-LB border became part of NJ State Highway Route 36; prior to that it was a county road. 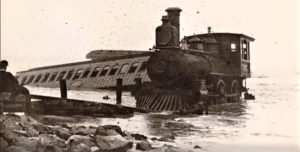 It wasn’t always sun and fun when traveling by train along the north Jersey Shore. This image is somewhere between SB and MB in the late 1800s.