Since Monmouth Beach is pretty much surrounded by water — a creek, a river and an ocean — bridges are necessary. The borough once had two water overpasses, today just one remains.

The Patten Avenue Bridge, connecting Monmouth Beach and North Long Branch, over Manahasset Creek (an indentation of Pleasure Bay) was built in the 1920s. According to borough records, in its early years the bridge could be opened for boats.

Patten Avenue Bridge looking to Long Branch, 1920s. The body of water is Manahasset Creek (an indentation of Pleasure Bay).

In the early years, bridge-tenders were MB resident, Billy Meyers, and LB resident, Van Morris. To open the structure a t-bar was inserted into a gear that drove a large turning table underneath that swung open the bridge. Sometimes motorists would help turn the gears. The bridge also had a small keeper’s hut.

Fishing and pleasure boats would pass through and dock into the borough’s Manahasset Creek. A waterfront house on the North Long Branch side was where catches of oysters were shucked. Other buildings in the area were occupied by the Patten family, who owned and operated the Long Branch Steamboat Company (known as the Patten Line).

“It takes both sides to build a bridge.”
—Fredrik Nael

The company was organized in 1890 by Thomas Patten, Sr. A wealthy member of the New York Stock Exchange, he built a 22-room mansion on the banks of Shrewbury River in 1892. Today the property is the Patten Point Yacht Club, which the group acquired for $55,000 in 1964. The legend is that the same men who built the Patten boats also built the large house. The senior Patten, who died in 1895, is also credited with starting the nearby Pleasure Bay resort area in 1883.

His son, Thomas, served as company president and was also a Democratic U.S. Representative for New York from 1911 to 1917. The company went into receivership in 1918, the year Tom, Jr. was appointed Postmaster of New York City. He died in California in 1938. Patten Avenue in town is named after the family.

In the 1943, a 500-foot-long fixed wood bridge was built to replace the swing one. The cost was $20,000. In 2005, thanks to $4.7 million in Monmouth County funds (which owns the structure), the bridge was closed for a year and completely demolished, expanded, and modernized. The new bridge was 12 feet wider  and 5 feet higher above the water. Marbro Inc.  was the contractor.

In August 1908, a day-long carnival was held in celebration of the opening of another new bridge from Monmouth Beach into Long Branch. The wooden river overpass was at the west end of Valentine Street over Manahasset Creek. According to a New York Times report, the festivities included land and water sports, a marine pageant, and a reception at Manahasset Hotel on the Long Branch side. The Manahasset Park Association had begun development of the area in 1894.

In 1917, one of the first official acts of a new MB borough council was a street name change. Two road names were changed to create Valentine Street. The old roads, divided by Riverdale Avenue (which was once called Fresh Pond Road), were Conover Road (eastside) and Manahasset Street (westside). Nearby Cherry Street, which is actually surrounded by Long Branch, is a noncontiguous part of Monmouth Beach.

In 1940, the county made $12,000 in emergency repairs to the narrow wooden bridge which had been closed off due to its bad condition.

The 380-foot Valentine Street bridge — at one time heavily trafficked and also owned by the county — was removed in 1965 with an agreement that the Patten Avenue Bridge would be improved (a promise fulfilled 40 years later). Monmouth Beach officials had long wanted the decaying bridge removed but Long Branch city officials and area residents, and EAI employees wanted to keep the Valentine bridge open for access reasons. County officials at the time said the water under the bridge had the highest pollution count in the whole Shrewsbury River. 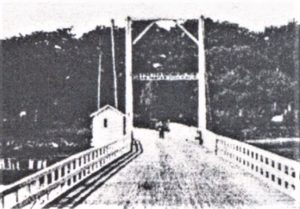 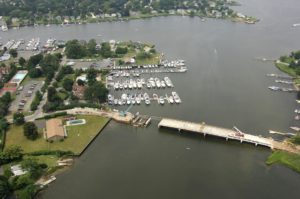 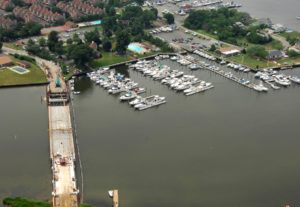 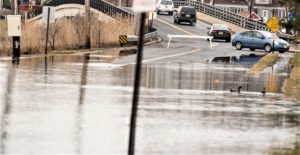 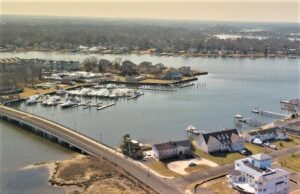 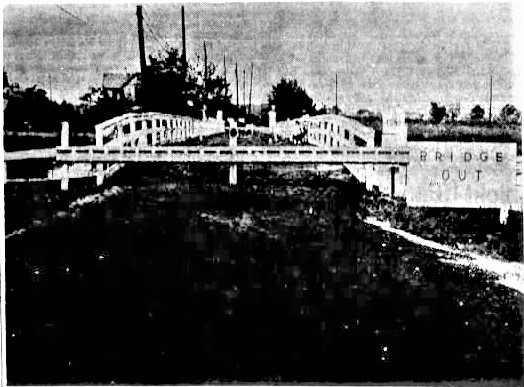 Valentine Street bridge shut down, July 1965. It was also called the Manahasset Bridge.