Coastal history on the Monmouth Beach area dates back to the late 1600s, but it didn’t become an official community until the early 1900s when a new borough separated from then Ocean Township. 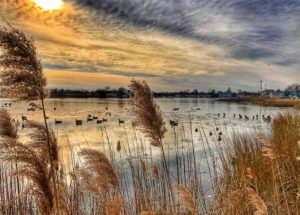 It was a very wise move — a March 7, 1906 Red Bank Register article called it “the most valuable part of its territory.” Ocean Twp. itself had separated from Shrewsbury Twp. in February 1849. As it turns out, according to the Ocean Twp. Historical Society, 16 other communities would leave Ocean Twp. in the ensuing years to form their own Identities, including Monmouth Beach (Long Branch was first in 1867; Loch Arbour was the last in 1957). Today’s 11-square-mile Ocean Township is land-locked.

From the Gilded Age perspective (19th century rich and gaudy, that is), the real glory years along the Monmouth Beach seashore section ran from approximately 1870 to 1920. For some 50 years, the very rich and powerful considered the small coastal community to be the prestige equivalent of the Rivera, the Hamptons, and Palm Springs.

The popularity of Monmouth Beach would spawn from the splendor of its southern neighbor — the city of Long Branch was America’s first real seashore resort. Beginning in 1868, soon to be elected U.S. president, Ulysses S. Grant, visited the city and fell in love with the area. Grant would return many times during his eight years (from 1869-1877) as the nation’s chief executive. Six more vacationing Presidents followed him. First Lady Mary Lincoln had “put the city on the map” when she first visited in August 1861.

To escape the clamor of Long Branch and its busy hotel crowds, many of the nation’s elite families made their homes just over the border in Monmouth Beach — they stayed usually during the summer. Time, tide, and trends ended those days, but many people remained to make the community the great place it is today.

“The beginning is the most important part of the work.”
—Plato

The first discussion about incorporating Monmouth Beach into its own borough came in October 1899. A news report stated that the plan all depended on the opinions of George Fisher Baker and Edward A. Walton, two millionaires who owned most of area land.

According to a June 23, 1924 article in the Long Branch Daily Record, Benjamin Harrison, America’s 23rd President, was a regular visitor to Monmouth Beach in the late 1880s when our borough was an exclusive coastal resort. Also, a July 1897 New York Times report had President William McKinley scheduled to visit Monmouth Beach that summer as a guest of the Houghtons at the MB Clubhouse Hotel.

According to a review of Monmouth Beach population data from the early 1900s, among the borough families that can claim that a descendant still lives in town over a century later are: the Bradley, Peterson, White, Dorcey, Wood, Johnson, West, Sheridan, Woolley, Lockwood, Maney, Ennis, Ireland, Nilson, and Wardell families. In addition to being fortunate people, the folks I know from these fine families also care deeply about Monmouth Beach — its past and future.

The list of families is by no means complete. Currently, the only official documentation of residents comes from a July 1915 NJ State Census report found at the Monmouth County Archives. According to that record, the borough had 652 residents. Fewer than half (320 men) could vote. Women didn’t go to the polls until the 19th Amendment to the U.S. Constitution was ratified in August 1920.

According to that 100+ year old census document, the borough had 155 dwelling houses, 345 residents worked in unskilled labor positions, more than 75% of residents were American born, about 85% could read, write and speak English, and about 72% of children under 18 were attending school. The borough’s mayor was Jesse P. Mahahan, a Republican who had lost the first ever mayor’s race in 1906 by seven votes.