The preservation and promotion of history — Monmouth Beach and beyond — is a great trust. History once gone can be most difficult to recapture. Credit goes to these borough residents for their steady work at verifying our past.

Down through the years they played a meaningful part in seeing that borough history was remembered. Thanks to their extra efforts the people, places, and traditions of Monmouth Beach will endure:

• Daniel Hennessey, Jr. — Whenever there is talk about classic photography on Monmouth Beach, Dan Hennessey’s name should come up quickly. The clarity and context of his work makes one feel as if they could almost step into the image. A 50-year borough resident, Dan not only had a virtuoso’s eye with the camera, but he also possessed the goodness to share his enterprise with generations of borough residents. Many of the public photos of historic Monmouth Beach either he took or were part of his extensive collection.

A North Long Branch native, Dan was also a founding member and president of the MB First Aid Squad and a borough fireman. For 40 years he was the respected chief of photography at EAI (once a spot of groundbreaking computer technology, then located at the north end of Long Branch Avenue), Dan and his wife Gloria raised five children in town. He died in January 1988; Gloria passed away in 2020. His father, Daniel, Sr. was the longtime train station master just across the borough’s border in North Long Branch beginning in 1907. Back in those days, the Central Railroad of NJ rolled through MB and LB along Ocean Avenue. 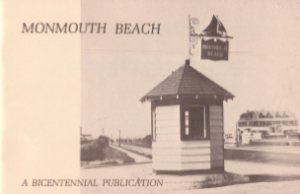 • Rosemary O’Brien — She matters eminently in Monmouth Beach annals as the author of the first official historic account of this amazing seashore community. Published in 1975 in conjunction with the borough’s upcoming celebration of America’s Bicentennial, the publication remains popular today. It’s a thoughtful chronicle of borough yesteryear in a compact 32-page booklet. Known as a stalwart fact gatherer and clear writer, Rosemary researched and also penned histories of the MB School and Precious Blood Church.

A busy mother of six, she launched and edited the first official borough newsletter in 1977. A final admirable contribution to borough heritage came with her service as the treasurer of the MB Historical Society, when that group championed the cause to save the old life saving station in 1999 (now the popular MB Cultural Center). Savvy at business, she managed The Shores oceanfront high-rise for years and also owned the MB Dry Cleaners on Beach Road. A former MB School PTA president and borough resident since 1964, Rosemary died in September 2007.

“Historians are prophets with their face turned backward.”
—Friedrich Schiller 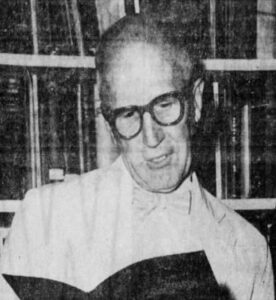 • Samuel Stelle Smith — A much-respected Monmouth County historian-author Sam Smith — a borough resident since 1953 — helped to record and advance Jersey Shore history. Sam wrote 10 highly-regarded books on the American Revolution and was a recognized authority on the Battle of Monmouth — a pivotal American-British conflict in June 1778. His 1964 book, The Battle of Monmouth, was considered the gold standard on the clash. He’s also credited with correctly identifying “Molly Pitcher” (an Irish woman named Mary Hanna McCauley).

He wrote award-winning books about military action in Trenton, Princeton, Brandywine, and in Delaware during our war for independence. His collection, which included maps, deeds, accounting records, published histories, newspapers, and other sources, is now part of the Monmouth County Archives. Sam was also helped organize the borough’s grand American Bicentennial celebration in July 1976 (chairing the committee and marking centennial homes). By profession a calculator company executive, he died in 1989 at the age 85 still pondering history. 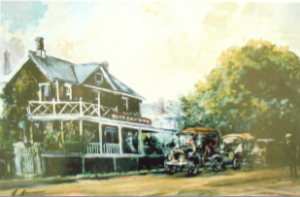 • Gail Gannon — The borough is very fortunate to have the telling eye and able hand of Gail Gannon — the town’s “artist-in-residence.” Much-admired for her canvas chronicling of old-time Monmouth Beach through her historic paintings, Gail has lived in the borough for over 60 years. Her talent for capturing numerous iconic borough images is unmatched.

Her use of colors is so rich and true it feels like time is standing still. It’s almost as if you can step right into a scene, so skilled is she in presenting the elements. Her paintings serve as a springboard for memories. Inspired by friends and the teachings of Ida Libby Dengrove (an Emmy-winning courtroom illustrator for NBC-TV News), Gail began her oil paintings of borough scenes in the 1960s. She and her husband, Jack (a charter member and president of the MB First Aid Squad), raised four children in town.

• George V. (Pat) Maney — Known to be among the more dedicated patrons of Monmouth Beach history, Pat Maney was born in 1901 and lived in town until his death in 1977. In July 1939, he won an amateur photography contest sponsored by the New York Herald Tribune (known as the “newspaperman’s newspaper”). His entry, a truly iconic borough photo, was a shot of a massive Galilee pound fishing boat (the Anna Marie) being hauled onto the beach by a team of horses and fishermen.

Admirers say Pat took many fine borough photos and had an ample memory for meaningful borough events and people during its first century. He was also a dedicated borough public servant. Starting out as a motorcycle officer in 1929, Pat served parts of five decades in the MBPD, capping off this career as borough police chief from 1955 to 1964. He also served as chief of the MBFC in 1936 (his dad, John A. Maney, was the first borough fire chief in 1908).