Staff Sergeant James Edward Sheehan, Jr. is something of a family legend. Gone but not forgotten. A shooting-star. They called him “Lefty” and he was a person my grandmother, aunts and uncles really wanted us to remember. One aunt in particular acclaimed Lefty. A long time Monmouth Beach resident, Ella Ennis (my great aunt). A much-accomplished person herself, our Aunt Ella had been the head dietitian for all of NYC’s 26 hospitals.

She spoke often of Lefty’s superb character. His thoughtful nature. His love of America. His bravery. His ultimate sacrifice for liberty. These were the qualities spoken of. So I decided to learn more about my kin and how he died. And I found that he’s every bit the hero my family elders told me he was. Him and, most gratefully, plenty of other World War II vets.

Today, Lefty’s “Wings” (his Aircrew Badge) and Purple Heart decoration are much-prized treasures among his family members, according to his admiring niece and goddaughter, Susie Sandlass Gardiner. 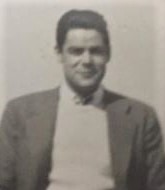 Born in Brooklyn on September 29, 1923, Lefty grew up in a close-knit, Irish-Catholic family one of six siblings. He graduated from St. Savior’s Academy, a Catholic grammar school in the borough’s Park Slope section. He went to high school at St. John’s Prep in Brooklyn (where he earned recognition as a left-handed pitcher). He was attending St. John’s University and working summers at the Sandlass Beach Club in Sea Bright when he enlisted in the US Army Air Corps in March 1943.

Lefty’s boyhood summers were spent in Monmouth Beach and many of those days were at the Monmouth Beach Club where he learned to swim and dive. During 1930s summers, his family lived in a pink clapboard house on a corner across the street and down a block from the club. The house is gone. The family lived in Brooklyn the rest of the year at 175 Midwood Street in the Flatbush section of the borough.

On September 11, 1944 the aircraft Lefty was aboard was shot down over Merseburg, Germany — nearby was the Leuna oil refinery, by then Nazi Germany’s most important refinery and one tenaciously guarded. Lefty was aboard a Boeing B-17 (nicknamed the “Flying Fortress”) that fateful day. His plane was called the “Kidley Divey,” the US Army aircraft and crew were part of the vaunted 8th Air Force assigned to the 407th Squadron of the 92nd Bomb Group. 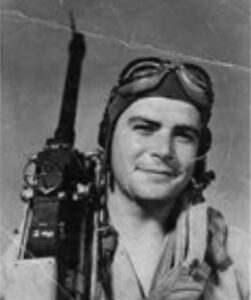 B-17 missions in this war sought to penetrate deep into enemy territory by flying above anti-aircraft artillery fire and attacking strategic targets by precision daylight bombing. The plane was typically armed with a dozen 50-caliber machine guns and nearly 6,000 pounds of bombs. To identify and hit targets, the crew used the Norden bombsight, a top-secret automatic computerized telescope that bombardiers used with remarkable accuracy.

By the mid-1940s, the German Luftwaffe was fading, according to my research, so Lefty’s plane was probably taken down by German flak. Fired from ground-based guns exploding shells produced flying metal shrapnel in all directions often hitting planes like B-17s — which flew in formation and its shell wasn’t impenetrable.

The overall bombing mission for Lefty’s crew that day was to attack Germany’s essential oil production network and halt The Third Reich’s war-making ability. Over a two-year period Allied B-17s dropped tens of thousands of tons of bombs — this was the sole mission of the 8th Air Force — and destroyed the German military’s ability to move. Targets included oil factories, refineries, rail links and other strategic industrial locations.

The carpet-bombing air raid campaigns on German industrial works took an awful toll, though — more than 900 B-17s were lost along with nearly 10,000 airmen being killed, wounded or captured.

As a ball turret gunner (he was also a gunnery instructor), Lefty’s combat post was a tight one — a 4-foot wide Plexiglas sphere that hung from the bottom of the B-17. Armed with twin .50-caliber machine guns, the turret could rotate 360-degrees and protected the plane’s exposed underbelly.

Lefty had a lot working against him. He showed valor just manning his post that day. According to a report on the Memphis Belle (a celebrated WW II aircraft), B-17 ball turret gunners had a 60% mortality rate and the average age of these gunners was only 18.

Indeed, the entire allied aerial effort to destroy the Nazi energy grid produced amazing acts of bravery and valor. From 1942 to 1945, a total of 17 Medal of Honors — by far the most — were earned by B-17 crewmen. After brief research I found two ball turret gunners to earn a Medal of Honor in WW II — Maynard “Snuffy” Smith and Archibald Mathies. Read about them and other MOH recipients, HERE. 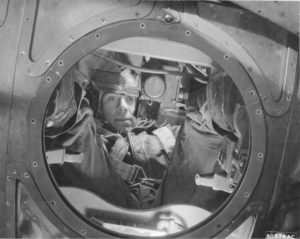 Lefty’s father was also an accomplished high school baseball player during his Brooklyn youth. Professionally, he worked in the oil business for over 40 years — mostly as a sales manager (with the Fiske Brothers). He died in June 1948. His wife, Irene, in 1968.