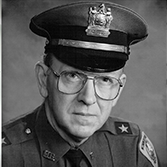 Richard L. Keller, that rare fine blend of command and merriment, was the ultimate public servant. The town’s longest serving Chief of Police was a larger than life figure during his times and Monmouth Beach is the better today thanks to his outstanding leadership and dedication.

“I started out plowing snow in Monmouth Beach,” he once told me. “I liked the place right away.” When I asked why he gave so much to the borough through the years, he replied: “the town has been very good to me and my family.”

As the borough’s top cop for 22 years, he always embodied the firm yet fair lawman. And his leadership was inspiring. He first joined the force in April 1960 as a special officer, became a patrolman in 1964 (the first to get official training), was promoted to sergeant in 1967, and led the force as its chief from 1972 to 1994. On his watch, the MBPD became modern — growing from 4  to 10 officers and a building a new police facility.

During his times he earned several commendations for bravery and service including citations from the NJ Assembly and NJ Senate. He was also a past president of the Monmouth County Police Chief’s Association and managed its popular annual clambake for years.

Born in Long Branch in September 1937, he was was the son of a career military man. A US Army veteran himself, Chief Keller was the borough’s longest serving police chief (and the youngest in NJ history at the time of his appointment). He was also a longtime member of the MB Fire Company and MB First Aid Squad (and a past president). Chief Keller coached Cap League baseball for many years and was the borough’s first recycling coordinator.

A true student of borough history, he took over as the volunteer director of the MB Cultural Center in May 2000. His talent for building and leading a team of volunteers helped save the stately Ocean Avenue building from oblivion. All the while he worked to develop a “jewel on the Jersey Shore” and he passed the mantle on to a good and caring team. When he retired from Cultural Center in December 2008, he concluded 50 years of faithful service to the borough. 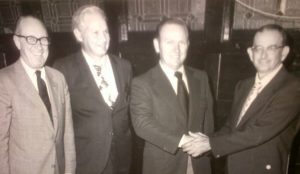 And above all else, he often reminded me, was a family that he treasured. He should. The longtime resident of Navesink Drive, and his superb wife, Pat, were married for 53 years. He also had four smart and lively children, Colleen, Dickie, Johnny, and Kathy.

Chief Keller died in July 2011 after a valiant battle with cancer. Shortly after his passing, the Richard L. Keller Memorial Music Series was created. All funds raised through these performances go to the Richard L. Keller Scholarship Fund to help worthy local youths who have demonstrated exemplary volunteer service.

One of the finest complements I ever received was when he thanked me for my “friendship and support” during the time we served together on the MB Cultural Center Board of Trustees. The man is definitely one of my “Monmouth Beach heroes.”