Area motorists — weary of the bumper-to-bumper traffic along Ocean Avenue-Route 36 in the summer — would have loved this deal. It’s a sweet dream. Too bad it never happened.

In January 1946, according to an Asbury Park Press story, the NJ state highway department offered up a plan to convert the old railroad right-of-way property that ran through Monmouth Beach and Sea Bright into an elevated roadway.

NJ transportation officials believed that the project would improve “Monmouth County’s oceanfront boulevard system” by connecting Long Branch to then Highland Beach (a declining resort spot where Sea Bright, Highlands and Sandy Hook converge). The new road would bypass the old Ocean Avenue although it would remain as a service or local road.

Plans called for a 5-mile long road to be built on top of a newly constructed 14-foot high sea wall. The proposal predated the serious construction of seawalls along the Monmouth Beach, Sea Bright and Long Branch coasts.

The land to be used for the highway was owned by the Central Railroad of New Jersey which had largely ceased operating in the area after World War II. State officials estimated the cost of the new highway project at $4.6 million (or about $65 million today). The new road would rise as it entered Sea Bright.

“You got to go down a lot of wrong roads to find the right one.”
—Bob Parsons

The Monmouth Beach-Sea Bright railroad line dates back to the 1860s. The first shore line (the Long Branch & Sea-Shore Railroad), which connected with opulent steamboats that ported at Sandy Hook, ran along today’s Ocean Avenue. In later years, even as MB and SB declined as resorts, the trains still ran — with three daily passenger stops. The shore rail line officially ceased operations in 1946. Fewer and fewer passengers and heavy upkeep costs due to storm damage were the reasons given for ending the train service.

The state proposed north-south thoroughfare never became a reality mostly due to the cost. Even as transportation officials were proposing the idea, they admitted they didn’t have the funds to do the work. Ultimately, the railroad land was sold or given to nearby property owners. Who knows how it all would have effected the MB-SB area?

Some 75 years later the concept still seems plausible. With train service ebding, the land was available, mostly vacant and a straight path through the three towns of LB, MB, and SB. And even back then the story referred to “the present highway as long considered a bottleneck in the road system” and one “often closed to traffic by inundation.” Just as it is today.

In fact, with Sea Bright now undergoing a major renaissance, the auto traffic along Ocean Avenue has never been busier. On some busy summer days, getting from Long Branch to Sea Bight can take over an hour.

Note: Walter Edge was the NJ governor at this time of this proposal. He had quite the resume — especially for a Garden State Republican. Twice elected NJ governor (in 1917 and 1944), a US Senator for NJ, US ambassador to France, and a Spanish-American War officer. Frank C. Young was the NJ State Highway Department superintendent back then. 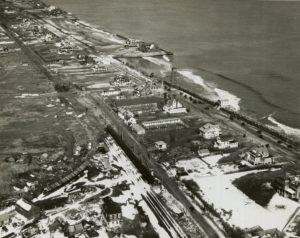