It is certainly the most classic structure along the Monmouth Beach coast, and perhaps, along the entire Monmouth County shore. While many of the borough’s grand oceanfront cottages are gone, this fine edifice with its stately north-south pavilions still architecturally defines the town. May this landmark forever stand.

Before the  club’s construction, the land at the foot of Beach Road (it was called Conover Road at one point) was owned by Richard De Gray and B.F. Robinson, according to a 1878 Woolman & Rose survey map.

Construction on the magnificent seashore facility, situated along Ocean Avenue at the foot of Beach Road, probably began in 1909. According to a July 1910 Long Branch Daily Record story, the large swimming pool (35 x 140 feet) was opening that holiday weekend; built for $50,000. The first club manager was George W. Avery.

William Heitzman, the borough’s first mayor, was in charge of the club’s construction. A busy builder, Heitzman also built five large cottages north of the club (all gone now) and in later years did repairs on the borough-owned bathing pavilion to the south.

Among the early club financiers was a once-prosperous New York attorney, Thomas W. Butts. He acquired title in 1910 with the hope to “establish a millionaire colony.” A Gilded Age developer, Butts had also owned the nearby Monmouth Beach Casino (now the Borough Hall) on Beach Road which was built in 1896. 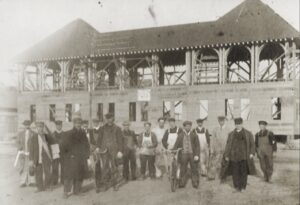 Butts would later fall into financial ruin and lose all of his MB holdings and serve time in jail. According to a February 11, 1915 report from The Evening World, Butts “lost $300,000 in an attempt to found a community colony at Monmouth Beach.”

Officially known as the Monmouth Beach Bath & Tennis Club (although it’s mostly called “The Club”) today, the property is privately owned with a membership of 350+ families going back four generations. The 9.5-acre land (with beach) is assessed for over $5 million. New membership requires endurance — there’s a long waiting list.

First named “The Baths,” the facility “came into existence when prosperity reigned and technology energized our vibrant nation.” The club offered a “summer haven with release from the rigors of the week’s labors and an opportunity to enjoy friends and family.” Some local historians say the structure is one of the few original beach clubs remaining along the entire Atlantic Coast.

A Shore Jewel
The club’s original design included a large open area building constructed around four large pavilions (the east towers were removed in 1948 due to structural concerns). Large Tucson columns surrounding an Olympic-size pool gave off the flavor of Roman baths. 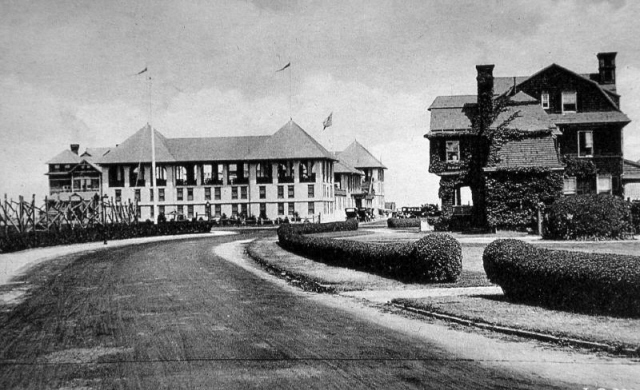 For many of the early years, the swimming pool was salt water, which had to be drained and refilled every other day. In the early 1980s, the pool was converted to a chlorine filtration system.

The club was closed during the World War I years, and afterward fell into disrepair and on hard economic times and was lost to the borough for unpaid taxes. In June 1923, the borough took control of the land, building and pool encompassing the Monmouth Beach Club for $55,000 ($40,000 for the deal and $15,000 in repairs) from Bernard Winfield (an Austria native who also owned the MB Clubhouse Hotel up the road). The council also approved an additional $40,000 to acquire several old deteriorating homes to the north of the club. By the summer of 1927, the club had seasonal revenues of $10,500.

In those days, club membership included year-around and summer residents and those who owned or rented the many large seashore cottages along Ocean Avenue and around town. Summertime entertainment at the club was lavish. Dances in formal attire accompanied by large string bands were common. Croquet was played on the large lawns and annual bridge tournaments were held in the ballroom of the east towers.

The club’s first official president was James W. Spalding (of sporting goods fame), who served from 1924 to 1928. By January 1929, the borough had assumed nearly $130,000 in debt to make improvements to the club (damage from frequent big storms was costly). Lamenting the specter of growing financial liability to manage the club, the borough council wondered in 1931 “what to do with it.” At that time, the borough’s total annual municipal budget was barely $100,000.

That same year, the borough council sought a $15,000 annual fee to rent out the club for a season. They got and accepted a bid of $8,000 for a two-year lease from the Monmouth Beach Association led by Judge Alfred J. Talley (a former Clarence Darrow colleague) and club president David Jarvis, who explained that their group was “trying to build the borough into a high class resort.” Then Mayor A.O. Johnson, who owned a local realty business, brokered the deal.

The first tennis courts were added in 1930. By 1934, thanks to Depression times and the borough’s own poor financial condition, the annual lease fee had fallen to $5,000. In 1935, the club created its first swimming team. 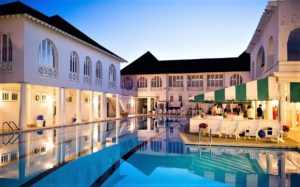 Beach Club Life
During those summers, it is was common for club members to work in the city and commute home to Monmouth Beach via the train which stopped at the corner of Beach Road and Railroad Avenue (now Seaview Avenue). Fathers were met at the station usually at the 7 pm train by families “all dressed up.”

The club was also known for its many luminary visitors through the years. In the summer of 1928, Al Smith visited during his US presidential bid that year. It didn’t help. Smith, then governor of New York, was soundly defeated by Republication Herbert Hoover in that election. Jimmy Walker, New York City’s “fun-loving” Democratic mayor from 1926 to 1932, was a also club visitor.

In the spring of 1937, borough commissioners approved the construction of clay tennis courts; today there are eight on the property. Bill Tilden, the world’s best tennis player in the 1920s, was an occasional guest. Jim Maguire, a former club president and friend and business colleague of billionaire investor Warren Buffett, won the club tennis championship at age 15 in 1945, a war year. 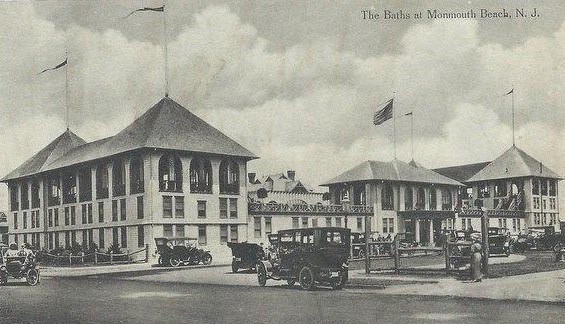 Modern Times
In June 1947, a group of investors representing the interests of the Monmouth Beach Club, Inc. led by William J. Buff (the club’s longest serving president from 1945-52) paid the borough $50,000 to acquire the facility (the borough had rejected a $130,000 bid in 1928). At the time, Jay W. Ross had objected to the sale, calling it “illegal” as there had been no public bidding on the club. At the time club property was assessed at $20,000.

The agreement called for the group to operate the club as a nonprofit, to make facility improvements and return it to the tax rolls after a 5-year payout or the property would revert back to the borough. Non-member townies call it the “reverter-clause.”

To accommodate growing membership, the west tower was converted to bathhouses. In 1938, six cabanas were added along the club’s north boardwalk. Still more were added in 1966 and 1981 and today there are over 40 bathhouses along the club’s oceanfront. In May 1981, the club was granted a liquor license.

Long Branch native Alfred Showler operated a real estate brokerage office in the southwest section of the building for 44 years until his death in July 1949. In the 1970s, Saks Fifth Avenue of New York used the club surroundings to shoot a high-end women’s summer wear catalogue. In June 1966, the facility was officially named the Monmouth Beach Bath & Tennis Club. It was granted a club liquor license in July 1968.

In 2007, the membership completed work on a large $3 million renovation project. The entire facility received major structural upgrades, new siding and roofing, and the south pavilion was refurbished. The club also had to make major repairs after Hurricane Sandy in October 2012 — including wreckage of all the oceanfront cabanas north of the main building.