Monmouth Beach was likely home to the first formal golf course on the Jersey Shore.* Just before the turn of the century, investors purchased the land that is now the Shorelands area from the widow of Hugh J. Hastings with plans to build a golf course. 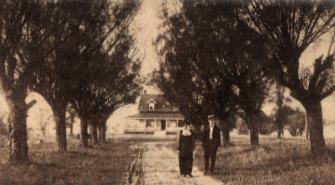 Developed by millionaires with nothing to do, the vacant land along the grassy banks of the Shrewsbury River (also known as the “Chasey Farm”) became a golf course with large clubhouse. Gilded Age tycoons George Fisher Baker, Edward A. Walton along with Colonel William Barbour led the golf development efforts; they paid $36,000 for all the land in May 1899. The wealthy men were all part of the Monmouth Beach Association formed in 1871 with a goal of creating an exclusive resort along the Jersey Shore.

They were so successful that by August 1899, the Governor of New Jersey, John Griggs, was playing at the club as a guest. The course was also lengthened that year from 1,600 to 2,800 yards. By the 1900 season, the club had nearly 300 members.

The first golf pro was Sydney Moore (later it was Thomas McCormick) and the first club president was T. K. Pembrook. Called the Country Club at Monmouth Beach, the 9-hole course measured 2,750 yards and played north to the Shorelands point (now Circle Drive).

A July 1900 New-York Tribune report called the Monmouth Beach Golf Club, “one of the most successful organizations of its kind” on the Jersey coast with membership growing “every day.” A June 1901 Asbury Park Press story stated the club “takes first rank in representing wealth and society” and the golf made “Summer life one continuous whirl of pleasure.”

“The most important shot in golf is the next one.”
—Ben Hogan

“President’s Cup” golf tournaments for men and women were common and hotly contested during those early 20th Century summers. Matches for the “Havemeyer Cup” and “VanDerhoef Cup” were also played. The MB Golf Club often competed against Sea Bright, which had its golf course in Rumson; George Lawson was the Sea Bright golf pro.

Former longtime borough Public Works Commissioner Bruce Bradley said his father, Bill, played the course. Willard Jessup, a summer resident who tutored the four sons of Colonel Barbour (one would become a US Senator, another a Harvard-trained zoologist) also played this all but forgotten shore links. Golf in Monmouth Beach was “abandoned” before the 1904 season. The reason being tennis was becoming more popular.

The green and white clubhouse, the former “elegant mansion” of Hugh Hastings (known as “Willowhurst”), was located at the northern high point of Navesink Drive (near today’s Center Road). It burned in a spectacular February 1901 fire (“the glare of the conflagration lighted the sky for miles down the coast,” according to the Asbury Park Press) but was rebuilt for $3,000 the next year. Later known as the Jones house, it was again badly damaged in a September 1961 fire. 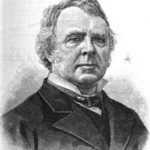 Eventually, the golf course property was sold off to the Monmouth Beach Land Company in 1911, which mapped out Shorelands for private housing. Anne Tull bought the first lot.

The first real development of this cozy river area began with Hastings, a wealthy NYC newspaper owner and national Republican Party activist, who came to America from Ireland in 1831. Starting in 1873, Hastings bought 33 acres for $75,000 — mostly in and around the Shorelands area. Hastings had acquired the house from Jordan Wooley, a former Monmouth County sheriff in 1862. After being thrown from a horse-drawn carriage while on Broadway in Long Branch, Hastings died in Sept. 1883 at age 63 (among his pallbearers were: President Chester Arthur, Jay Gould, General Thomas Eckert and William H. Vanderbilt). Hastings Place in town is named for him. 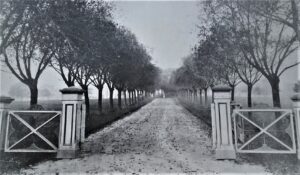 Entrance to the golf course, around 1900. 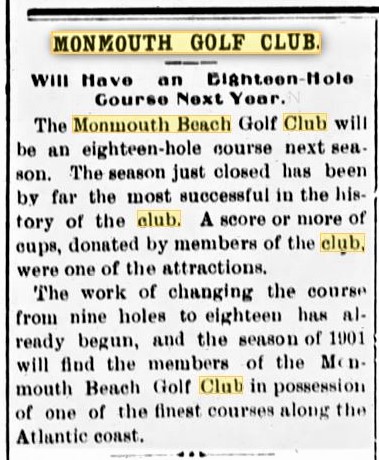