The founder and first settler of the New Jersey coastal area today known as Monmouth Beach (other than the true first settlers, Native American Indians) was a man named Eliakim Wardell. Area residents should remember and respect this man for starting such an awesome community — all beginning as “Wardell’s Beach” some 350 years ago. 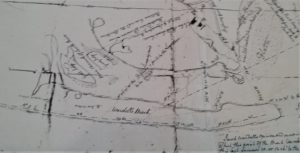 Born on November 23, 1634 near Boston, Wardell was a Quaker (known as the Society of Friends). His father, Thomas, had immigrated from England. His mother was Elizabeth Woodruff.

Eliakim and his wife, Lydia (they married in October 1659), were persecuted, whipped, imprisoned, and ultimately banished from New Hampshire by the Puritans for their religious beliefs. Lydia, the daughter of Isaac Perkins and Susannah Wise, was particularly combative in her protests, “appearing naked in Newbury as a ‘sign’ unto her persecutors who had stripped women to whip them.” Ultimately, the couple fled to Rhode Island where things on the religion freedom perspective improved somewhat.

In 1667, hearing word that large tracts of undeveloped land were able for low cost and limited taxes, Wardell and wife (they would go on to have 7 children) came to what would become Shrewsbury Township located in Monmouth County (NJ was then a British colony). About that time Wardell was named an associate of the Monmouth Patent group, the first area developers, which was formed in April 1665. That land grant was signed by Governor Richard Nicolls, who was in fact the English governor of New York (NJ was then part of New York).

According to the Monmouth County Historical Association, the county was first settled by migrant New Englanders in 1664. Monmouth County was considered a very desirable area for its abundant “shoreline and estuaries which provided a bounty of clams and fish, and the rich soil of the interior lowlands that provided varied and generous agricultural products.” Monmouth County was officially formed in 1683 by the Proprietary Assembly, and was named after Monmouthshire, England.

In May 1668 according to local folklore, five associates of the original Monmouth Patent holders from 1665 (Wardell, John Slocum, Jasper and Peter Parker and George Hulett) sought to resolve a land acquisition dispute with local Indians. Starting at dawn at a spot near today’s North Broadway in Long Branch, Slocum engaged in a “two falls out of three” wrestling match with Lenape tribe member Vow-a-Vapon. Under the terms, if Slocum won he could buy all the land that he could “walk off” in one day. If he lost the group left with nothing. Slocum won a tough match — facing an opponent who wore “a coat of goose grease.” This account is also cited in the 1940 Long Branch city-bio book, Entertaining a Nation. Slocum got Long Branch, the Parker’s took Rumson/Little Silver, Wardell received Monmouth Beach/Sea Bright, and Hulett disappeared.

Surprisingly enough, settlers had little interest in the seashore in those early days, with most Jersey Shore pioneers thinking it practically worthless. 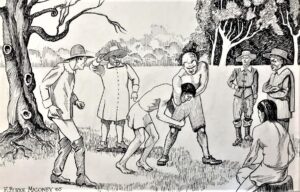 Wrestling match for Monmouth Beach between John Slocum and Vow-a-Vapon, 1688.

Little For a Lot
Wardell then bought the rights to the area that is now considered Monmouth Beach (about 454 acres including Sea Bright) from the Lenape tribe for the equivalent of 4 pounds (about 11 cents per acre). He paid in blankets, clothing and hardware for all the land north of Long Branch, below Sandy Hook, and between the Shrewsbury River and Atlantic Ocean.

The area known as “Fresh Pond” was called “the most fortuitous land grant of all,” according to the book, Up and Down the Beach by June Methot. And unlike other land deals of the time “there never was much question as to the ownership” by the Wardell family, which would hold clear title to the property for nearly 200 years. “Wardell’s Beach” was a regular location on most maps of those days.

Obviously a person of influence, Wardell was appointed the first Sheriff of Monmouth County in May 1683 (he was called a “Royal Sheriff” and served for 6 months). Prior to that he had been a deputy representing Shrewbury in the General Assembly. (New Jersey wouldn’t join the union until December 1787.)

Wardell built the first structure in Monmouth Beach. Construction materials included massive stones previously used as ballast on ships coming to America from Great Britain. Originally know as the “Wardell farmhouse,” the high-ground subsequently became the Monmouth Beach Clubhouse Hotel, an exclusive coastal resort and vacation hotspot for Glided Age tycoons in the late-1800s. A fire destroyed the main structure in December 1929, but parts of its still survive today on Beach Road and River Avenue.

Wardell died in 1710 in Burlington, NJ. Many of his descendants (Joseph, John, Ebenezer, Jacob, and Henry Wardell among them) would go on to live in and around Monmouth Beach and help shape our coastal area.

According to Monmouth Beach: A Bicentennial Publication (1975) by Rosemary O’Brien, the lineage of MB ownership for the Wardell family is that Eliakim’s son Jacob remained on the farm. Jacob’s son Peter, left and came back to MB. When Peter died the farm then went to his son, Benjamin (1763-1821). Benjamin’s  son Henry was the next to own the tract. Henry was a very busy fellow — in 1842 he built the Ocean House (in today’s Sea Bright), the first hotel at the Jersey Shore. He also donated property for the U.S. Life-Savings Service station in 1849.

Sadly, to my knowledge, there is no official recognition of Wardell or his family in the entire borough of Monmouth Beach today.