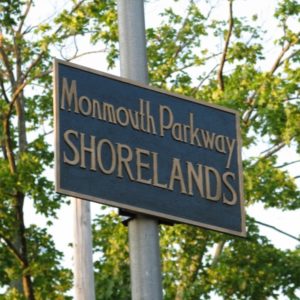 Shorelands — many a fine family and good times have called it home. Mostly, the folks who live there are water lovers. They enjoy the fishing, the boating, the swimming, and the water views. They also respect it. They must, they’re pretty much surrounded.

The first real development of this cozy river area began with Hugh J. Hastings, a wealthy NYC newspaper owner and national Republican Party activist, who came to America from Ireland in 1831. In 1873, he bought 33 acres in Monmouth Beach for $75,000 — mostly in and around the Shorelands area (then largely vacant shorefront land). After being thrown from a horse drawn carriage while on Broadway in Long Branch, he died in 1883 at age 63. Hastings Place was named for him.

In 1896, Gilded Age tycoons purchased the land that is now the Shorelands area developed it into a nine-hole golf course. Perhaps the first in the shore area? (MB Golf Course story). The Monmouth Beach Golf Club was popular but brief, lasting only until about 1905.

Long Development
In 1912, George Gale sold the golf course land to the Monmouth Beach Land Company, which began real development. In September 1914, the New-York Tribune reported that the sale of “Shorelands by J.W. Doolitle” was underway. By then only “two bungalows of artistic design” had been built. The plan called for bungalows costing $1,500 to $3,500 to be built.

By August 1925, a sales pitch from Howard W. Scott Auctioneers in a bid to sell 230 waterfront lots offered this pitch: “just think of the pleasures, the health and happiness for your wife, your children and yourself, in owning a delightful home on the Shrewsbury River.”

The lots of land — which had to be “sold for whatever they will bring” — were located on what is now the borough’s Shorelands part of town. It’s tough to imagine having to advertise and auction off waterfront lots in Monmouth Beach today.

“Water is the driving force of all nature.”
—Leonardo da Vinci

According to the document, the NYC-based auction house sold the properties from a large tent along Monmouth Parkway. At the time, only two homes were up along this half-mile stretch of median-lined roadway. The town was called “an exceptional all year residential community having in excess of 48 trains daily.” The trains stopped rolling in town just after World War II.

The auction flyer proclaims: “Since the great boom on Florida properties the man of vision, foresight, and intelligence begins to realize that if Florida homes for winter occupancy are worth fortunes, summer homes or all year homes of close proximity to the largest, fastest growing, wealthiest city in the world, New York, should be a much safer investment. Monmouth Beach — as far as natural beauty, fine homes and speculative or investment possibilities are concerned far surpasses Miami Beach, or, in fact, any beach in the country.” 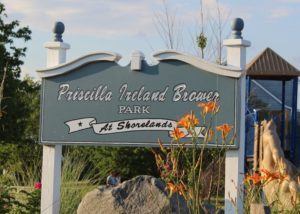 Priscilla I. Brower Park at Shorelands.

The lots were ready for immediate development as all the water, gas, electric lines along with roads (Monmouth Parkway, North Road, Shrewsbury Drive, South Road and Center Road) were already laid out. A park and boat dock were also completed.

Can’t Give It Away
The flyer closes with “on account of the nearness of the Gulf Stream, the winter climate is greatly tempered and little snow is found in this ideal town.” Most of the lots did not sell in that 1925 summer; the first sold to Anne Tully that November. In 1927, Allyn Hall Realty donated land that would become Monmouth Parkway, the borough’s widest road.

Although a Shoreland’s Association was first incorporated in October 1927 (the first trustees were George Hardy, Richard Dodge, and Samuel Cooper), serious development of the area really didn’t get started until after World War II. At first the association had to petition the borough for area improvements; Monmouth Parkway wasn’t properly paved until 1944.

One person who did make Shorelands home was William Thomas, the son of Norman Thomas, a  six-time US presidential candidate for the Socialist Party. In 1943 he lived on Navesink Drive. 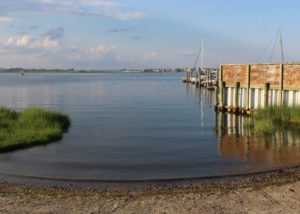 Tide coming in at Shorelands.

Still, for parts of 50 years, Shorelands families shared many good times as friends and neighbors who loved the nearby Shrewsbury River. The association’s annual July 4th picnics were all the rage, and boating was so busy there was a paid dock master. Monthly meetings were spirited and most families were very active. For many years, association members were responsible for covering the taxes and upkeep on various pieces of riverfront property in the area. Holdings included a large recreational field, dock, and other land off Navesink Drive.

A June 1965 blaze took the association’s old clubhouse at the foot of Shrewsbury Drive. Another clubhouse off Navesink Drive (the original golf clubhouse) also was lost to an early 1960s fire.

Most years association presidents had to push for a full gathering of club dues. A 1963 letter, pleading for $5 in annual dues, explained that if the borough took the property it would be “hard to imagine the commercial atmosphere that would prevail.”

The town did assume control of the remaining property near North Road in 1978 and today it’s a park named in honor of Priscilla I. Brower, a lifelong Shorelands resident and respected community activist who died in March 2015.