In my ongoing effort to undercover Monmouth Beach history, I have found at least two United States Senators who had strong connections to this shore town. And several others had minor local connections.

First and foremost was William W. Barbour, a US Senator for New Jersey from 1931 to 1943 and a Monmouth Beach native. The other, Alexander G. Cattell, who represented New Jersey in the US Senate from to 1866 to 1871, helped make the town into a resort grand enough to host presidents. Both guys were very wealthy and very Republican. 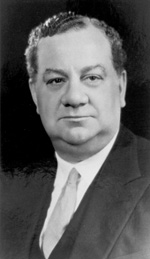 Barbour, born at Monmouth Beach in July 1888, also served as Rumson’s mayor from 1923 to 1928. An amateur heavyweight boxing champion in 1910, Barbour turned down a chance to fight pro heavyweight champ Jack Johnson (he mother advised against it). He dropped out of Princeton University in 1917 to take over the family business.

His father Colonel William Barbour, one of the late 19th century’s most connected players. His large seashore mansion was on Ocean Avenue where the Admiralty now stands. He owned the Barbour Linen Thread Company, which manufactured linen treads for fishing liens and nets. Then a big business.

In addition to being a founder and president of the Monmouth Beach Country Club in the late 1880s, Col. Barbour was active in national Republican politics. U.S. Speaker of the House Thomas Reed of Maine, a political powerhouse in the 1890s, was also his guest on several occasions. According to the L.B. Daily Record account, Barbour was known for entertaining “some of the first people of the land” and for conducting “the finest musical concerts of the Jersey Coast.”

Senator Barbour, who was an early and vocal advocate of allowing Jewish Holocaust victims the right to come to America, died while still in office in Washington, DC in November 1943. 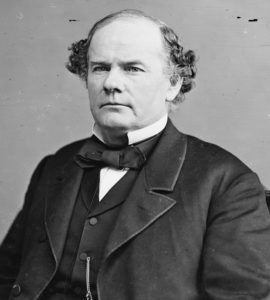 Among Cattell’s notable accomplishments were that he voted to convict President Andrew Johnson of impeachment charges in May 1868, and shortly thereafter in 1871, became one of the first major developers of Monmouth Beach. He owned a large house on the eastside of Ocean Avenue just north of Valentine Street.

Senator Cattell was one of 20 prominent citizens to join together and form the Monmouth Beach Association. Incorporated in Spring 1871, the group is largely credited with drawing up the blueprints for the borough. The Salem, NJ native, born in February 1816, was a respected state banker and legislator prior to his election to the Senate. He was also a member of the first US Civil Service Commission and served on the NJ Board of Tax Assessors and NJ State Board of Education.

In May 1868, Cattell was one of 35 Senators to vote to convict President Johnson. The measure fell just one vote short of the two-thirds majority necessary to remove a sitting president. New Jersey’s other Senator, Frederick T. Frelinghuysen, also voted to convict the Democratic president. His great-grandson, US Rep. Rodney Frelinghuysen, who represented New Jersey’s  11th district in the US Congress for 22 years,  joined with a House majority and voted to impeach President Bill Clinton in December 1999. Congressman Frelinghuysen retired on 2019.

Senator Cattell and his associates (including George Robeson, then U.S. Navy Secretary under President Ulysses S. Grant) had acquired the land that now encompasses Monmouth Beach from Dr. Arthur V. Conover. The Freehold physician had bought the tract for $5 an acre in 1865 from the heirs of Major Henry Wardell, the great-great grandson of the area’s first settler, Eliakim Wardell.

The association’s goal was to create an “exclusive resort on the Jersey Shore.” Guided by a managing partner, John Torrey, Jr., an engineer was retained and the borough’s first streets and property plots were laid out. It was the beginning of the glory days for the rich and famous in Monmouth Beach.

Senator Cattell, who also helped to found the community of Merchantville near Camden County, NJ died in April 1894.

A little more digging showed me that the daughter of Senator H. Alexander Smith (a Republican who served NJ from 1944 to 1959) was married at the St. Peter’s Church of Galilee in town. She married a member of the Dominick family, which would produce its own senator, Peter H. Dominick, a Republican who represented Colorado from 1963 to 1975. And the uncle of Senator Nicholas F. Brady (a US senator for NJ during 1982) owned a large house on Ocean Avenue in Monmouth Beach.

If you’ve done some reading on American government and politics, you know that the job of United States Senator is perhaps the best ever conceived. Formed by the US Constitution in 1787 and long known as “World’s Greatest Deliberative Body,” 100 senate members serve for 6 years (lots of time for voters to forget), wield vast power over entire states (including New Jersey with nearly 9 million residents) and earn $174,000 per year plus health benefits and a federal pension (98% of American workers make less). Senators also get personnel and office expense accounts (for a senator from NJ the annual allowance was about $3.5 million). Plus, they get to talk all the time (often without result). 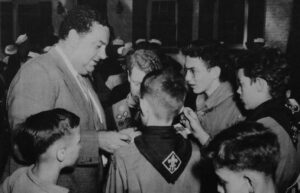 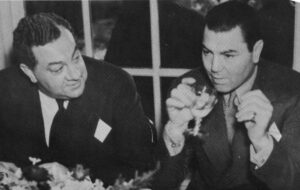