My father always told me that Harry Truman should be my favorite American President. “If he didn’t drop the bomb in World War II, I wouldn’t have lived, and obviously, neither would you,” Dad explained to me. 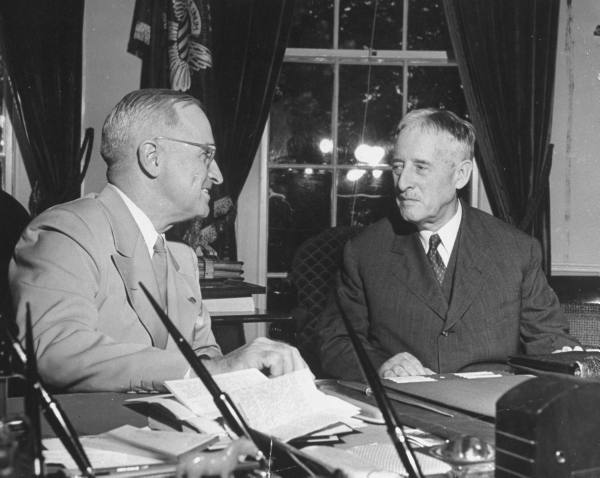 That’s strong stuff coming from someone who dedicated his life to healing people, but I get it. As a 26-year-old medical doctor aboard a US Navy warship in 1945, dad would have been part of a massive invasion force that U.S. military strategists thought necessary to conquer mainland Japan. By comparison, in February 1945 as allied forces drove west, the 36-day battle of Iwo Jima had killed and wounded over 25,000 U.S. Marines.

A lot more American military personnel would have died in future combat (1 million+ casualties were estimated), but President Truman’s monumental decision changed all that. My dad held firm to his opinion until his death — along with many other vets of that era.

One of the men who strongly advised Mr. Truman to go nuclear during that fateful summer nearly 75 years ago was Henry L. Stimson, who was serving as the U.S. Secretary of War. During my research on Monmouth Beach history, I learned that Stimson, who sought high society inclusion, owned a large summer home on Ocean Avenue in the early 1900s. Stimson was “a man you could trust 100%,” President Truman said.

“History is a race between education and catastrophe.”
—HG Wells

In April 1945, then Vice President Truman said he felt like “heaven and earth” had fallen on his shoulders when President Franklin D. Roosevelt died in after 12 years in the White House. It fell to Stimson — an early supporter of technology in warfare — to first inform the new President about the existence of an atomic device.

Born in NYC in September 1867, Stimson became a respected Harvard-trained lawyer and high-level presidential confidant. In 1905, he was appointed U.S. Attorney for the Southern District of New York by President Theodore Roosevelt (a friend of TR, Stimson would build the first modern prosecutor’s office). Stimson also served as a U.S. Army colonel in World War I and for a time was Governor-General of the Philippines. Known in history as a “Washington Wise Man,” Stimson was also War Secretary under President William Taft (from 1911-1913) and Secretary of State under President Herbert Hoover (from 1929-1933). Both were Republican presidents. 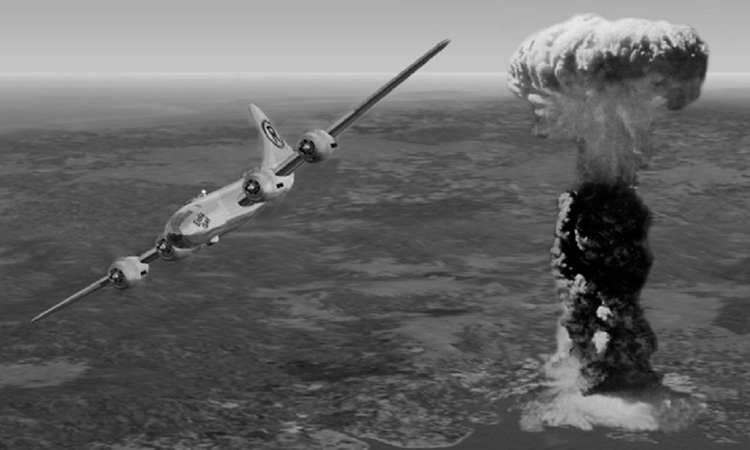 The Hiroshima bomb blast in August 1945.

Appointed Secretary of War by Democratic President Franklin Roosevelt in July 1940, he stayed on under Truman when FDR died. FDR made him a cabinet member thinking his reputation for integrity and Republican credentials would help built support for the war effort. Prior to the Japanese attack on Pearl Harbor in December 1941, it was Stimson’s job to get an ill-equipped nation ready for world war. Traveling all over the country and working with Congress, Stimson helped develop, train, and deploy an American fighting force that would include over 12 million combatants at the war’s conclusion.

Stimson had been directly responsible for reporting to FDR on the progress of the Manhattan Project, the codename for the top-secret development of an atomic weapon in the deserts of New Mexico. Despite war worries, advancing age, and ill health, Stimson was determined to deal with the “terrible responsibility” of using the A-bomb. According to Truman, David McCullough’s Pulitzer Prize-winning biography of the 33rd president, Stimson advised the president that “the shock value of the weapon would stop the war. Nothing short of that would.”

A special presidential committee that advised Mr. Truman about the bomb, chaired by Stimson, unanimously agreed that the bomb should be used as soon as possible, against war facilities in Japan, and without warning. The President agreed. 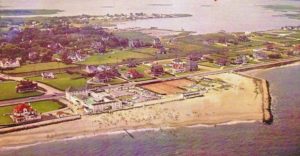 The first A-Bomb (the equivalent to 20,000 tons of TNT) was dropped on Hiroshima on August 6, 1945 and a second fell on Nagasaki three days later. Stimson had rejected as a target the city of Kyoto, where he and his wife had honeymooned. The two blasts would kill more than 130,000 Japanese and the radiation fallout would claim twice that many in the ensuing years. Japan commenced surrender the next day. The war won, Stimson retired a month later. The number of American casualties during World War II would reach 292,000 killed in action and 672,000 wounded.

In a February 1947 Harper’s magazine article, The Decision to Use the Atomic Bomb, Stimson would make the first thorough defense of the weapon’s use. He died in October 1950 on Long Island, New York.