The United States Coast Guard has a long history of service and sacrifice — even in Monmouth Beach.

In 1915, the U.S. Life-Saving Service was incorporated into the U.S. Coast Guard. This included a 4,200-square-foot building in Monmouth Beach and large property on Ocean Avenue (the area was known locally as Galilee). That facility built in 1895 is today the MB Cultural Center (and the borough’s oldest pubic building).

Their amazing legacy of service in Monmouth Beach makes preserving this spot — this home for “Sentinels of the Sea“— all the more meaningful.

Upon creation, the USCG became the “only maritime service dedicated to saving life at sea and enforcing the nation’s maritime laws.” At that time of merger the MB station keeper was Captain George W. Green, a 12-year veteran of many heroic rescue efforts.

Such was the dedication, it wasn’t unusual for a father who served in the U.S Life-Saving Service to have a son who was a member of the U.S. Coast Guard. The unofficial motto of the life-saving service was: “You have to go out but nothing says you have to come back.” The USCG kept the serious duty going.

America’s coast guard was founded by Alexander Hamilton in August 1790. As the nation’s first treasury secretary, he had concerns about smuggling on the seas. And news reports show the USCG stationed at MB getting its fair share of bootleggers in prohibition times. Two busts in 1924 alone yielded nearly 200 cases of booze (gunfire took place in one confiscation). 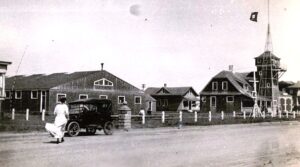 By 1925, the USCG at Monmouth Beach (called Station #100) had built the first steel observation tower on the Jersey Shore. The 120-foot-high structure included a small hut on top. Then station keeper Capt. Carroll A. Osborne put coastal visibility at 25 miles. The watch was 24/7.

Chief Boatswain’s Mate John Salter was in MB command in the early 1940s. By the late 1940s, it was John J. O’Neil in charge.

Beginning in 1947, the USCG employed its DUKW, a six-wheel-drive amphibious rescue vehicle (more popularly known as a “Duck”) to very good effect. This odd-shaped apparatus (is it a boat or a truck?) was a regular site during bad storms and floods in MB.

The USCG in Monmouth Beach remained busy until the early 1950s when the location was reduced to “caretaker status.” Six of the eight men stationed at MB were transferred out and all water rescue operations ceased. A board chaired by USCG Rear Admiral Joseph Greenspun had first addressed closing the station in 1949.

Strongly opposed to closure at the time were area U.S. Representative James Auchincloss, MB Mayor Sidney Johnson and other local shore officials. The leaders said the closure would leave 20 miles of unprotected coast between Sandy Hook and Shark River.

Auchincloss (Yale-educated, Rumson mayor, WW I intelligence officer, and prosperous Wall Street stockbroker) was a congressman with lots of class and connections — back when they made able U.S. Representatives (today in very short supply).

As the Jersey Shore congressman for 11 terms beginning in 1943, Auchincloss was popular and effective. He out-polled Dwight Eisenhower in his NJ district in both of the president’s landslide election wins in 1952 and 1956.

Thanks to his efforts in Washington and ongoing local pressure, the station was briefly shut but reopened in June 1952. The station leader then was Chief Boatswain’s Mate George L. Everingham, (who retired from the USCG and went on to direct maintenance at Monmouth College for 20 years).

Still, all during the 1950s, the USCG sought a total shutdown for the MB station. Area leaders objected citing “the Shrewsbury Rocks” fishing area (a mile out to sea and dead center of Sea Bright and Monmouth Beach), which at summer has “the greatest concentration of party and sports fishing boats from Maine to Florida.” Many also thought the MB location the perfect spot to quickly launch any necessary marine aid on the both the river and the ocean.

No matter — the Sea Bright, Long Branch, Deal and Spring Lake coast guard stations had all shut in years prior (there were 8 USCG stations in Monmouth County in 1936). In a post-war world, shore protection wasn’t as vital. Plus, fewer marine disasters in general and a more modern, quicker Coast Guard meant the whole shore area was safer. The USCG finally walked away from MB in 1964, part of Johnson Administration budget cuts (Auchincloss and his clout retired that year). Chief Frank L. Bernhard was the MB commander at the end.

The N.J. State Marine Police acquired the building and property through a Green Acres grant in 1965 and remained there for nearly 30 years. Before the Summer of 1992, state police officials, feed up dealing with an aging building ($130,000 in roof repairs was only a start), sought to close the MB unit.

Facing a wrecker’s ball in April 1999, the MB Historical Society inspired townspeople to rally and save the historic building. Borough philanthropist Jay W. Ross agreed to fund a $110,000 large-scale rehabilitation effort, and Pat McConville managed the project with great care. In May 2000, the MB Cultural Center was opened under volunteer director Richard L. Keller (both Keller and McConville were MB police chiefs).

Today, a Board of Trustees and dedicated volunteer staff oversee a very popular seashore facility. Read its story here. 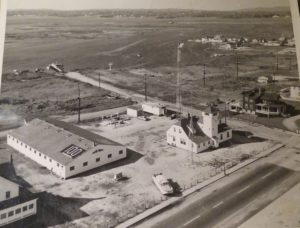