It’s a group of guys — going back 50 years now — who know how to play softball and win. The Monmouth Beach Fire Company softball team has won so many league championships they’ve lost track.

I stopped counting at 15 when writing the fire company’s Centennial Journal in 2005. They continued to rule the base-paths, and today, it must be about 25 titles. Deploying generational talent on the field — Schulz, Jones, Barham, Keller, Marsh, Kuhlthau — competitors sometimes wonderd if Monmouth Beach was “procreating master ballplayers.” Borough firemen first started playing softball in 1971 in the Coast Firemen’s Softball League. Paul Kleiberg, a 1978 MBFC chief, managed those teams to 7 championships. Paul died in 1995 at age 45.

Athletic, smart and driven, the “Beach Boys” don’t like losing. Turns out they don’t do it much. A long history of success — playing in different leagues — includes several undefeated seasons, including this season. Since joining the Shore Firemen’s Sunday Morning Slow-Pitch Softball League in 1990, the team has always been around when the league play-offs start. John Schulz, Jr., a two-time MBFC chief and serious competitor, started managing the team in 1985. His sons Matt and Andy — good men and good athletes — now carry on the competitive spirit. Monmouth Beach fireman Chris Marsh is currently the softball league president. His son, Matt Marsh, manages the team and is VP of the league. Another son, Josh Marsh, is also a solid fireman-ballplayer (they are part of four Marsh generations to serve in the MBFC).

The consensus opinion on the best home-run hitters over the years includes Burt and Bill Barham, Kevin Dougherty and Lester Jones. The top pitchers have been John Schulz, Sr. (1970 MBFC chief) and Phil Kuhlthau (1996 MBFC chief) and his son Jay Kuhlthau, ably carries on the tradition — pitching and winning the ’22 title game (and catcher Ryan Sandoz did a great job behind the plate). Schulz, Sr., who passed away in 1990, had several seasons with an undefeated record having pitched every inning. The current league trophy is named in his memory. John was also a Monmouth Beach First Aid Squad charter member in October 1958.

What’s their secret? “They take it very seriously and they know each other very well,” explained late local sports reporter, Jack Oakley, who covered the team for years. “The Monmouth Beach guys are a good all-around team — offensively and defensively,” said Jack, who was a Red Bank volunteer fireman for over 55 years. “Most are very good athletes to begin with and they take care of themselves too.” Jack would be pleased to hear it’s still like that. During his 50-year sports journalism career, Jack worked for 10 newspapers in NJ. He died in July 2010 at age 79.

Congratulations to the winners! 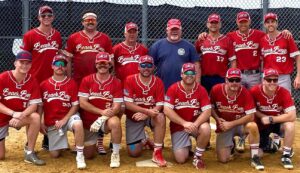 “Perfect Season” — MBFC Softball Team League Champions, August 2022. The “Beach Boys” finished the season with an undefeated 16-0 record and won the Fireman’s Sunday Softball League title for the 5th time in the past 6 years. They beat Wayside 9-8 in the final at Griffin Park. Congrats to all players! 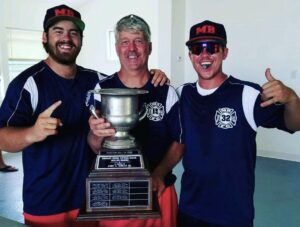 “Title Town” — Matthew, John and Andrew Schultz of Monmouth Beach with the Fireman’s Sunday Softball League championship trophy. John was a longtime player-manager for the MBFC team. His two sons now play for the “Beach Boys.” The young men represent the fourth generation of Schulz to serve in the fire company. 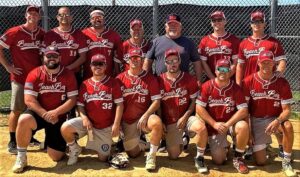 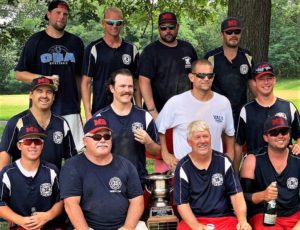 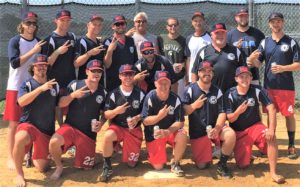 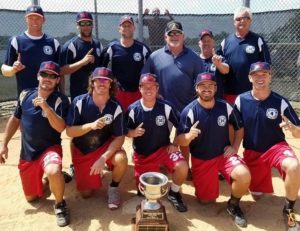 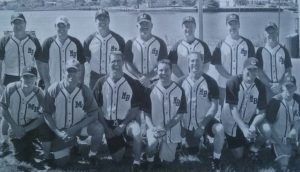 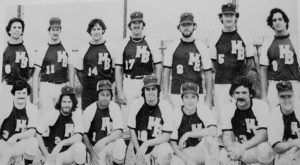 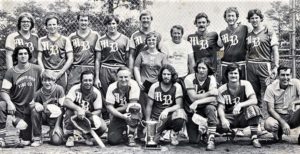 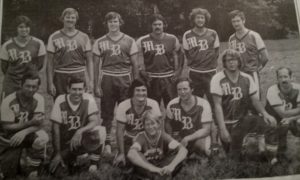 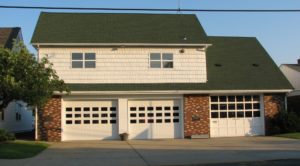 Home Base — the Momouth Beach Firehouse on Beach Road, 2017.