MBPD: A History of Serving & Protecting

A main reason why Monmouth Beach is such an outstanding community is because residents trust that they live in a safe and secure town. That comfort standard began over a century ago and continues into today — much of the thanks goes to borough law enforcement.

The origins of the Monmouth Beach Police Department date to April 1906 when the first borough council appointed a police committee. The town’s first police budget was $1,200. Members of that first committee were Borden West, John A. Maney, and Abram O. Johnson. For more than 40 years, the chairman of the police committee was considered the police chief.

In fact, for most of the first half of the 20th century, the borough wasn’t protected by official police officers, but rather by “marshals” (today’s borough cops are called “patrolmen”). Monmouth Beach didn’t have a titled “chief of police” until 1945 when Edward Sweeney was appointed to the post.

The first marshals, appointed in June 1906, were John Burns and Charles Archer. They were paid $60 per month and worked 12-hour shifts from June 1 to October 31. The police committee appropriated a sum of $10 to pay for their revolvers and cartridges.

In April 1909, call boxes were installed in town and the council determined that one of the duties of the marshals would be to raise the American flag at the firehouse each day. 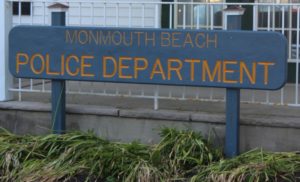 The first discussion of town speed limits came up in 1912; signs were finally posted in 1927. The first time the town purchased police uniforms was in May 1914; the amount of $21.30 was paid to W. H. Woolley & Son in Long Branch. The borough’s first police vehicle was bought in March 1921 — $87.50 for a Harley Davidson motorcycle.

The first police building was a kiosk constructed at the intersection of Beach Road and Ocean Avenue, completed in the summer of 1922. It remained there until 1926 when it was moved to the Galilee section of town. By the 1930s, the structure had become the office for Sheridan’s Garage and later an outhouse for Pete’s Inn (now Boyle’s Tavern). Today, it stands refurbished on Beach Road on the Wells Fargo Bank property.

The borough’s police department was officially created in February 1927. In April of that year, the police force purchased its first auto, a Ford Coupe, for $575. In 1931, the commissioners passed an ordinance prohibiting the use of guns on all land in the borough (except on rodents and predatory birds or animals). In June 1955, the MB School PTA asked for and got the first crossing guards.

“The safety of the people shall be the highest law.”
—Cicero

In May 1945, George V. Maney, Nicholas F. Woolley, and C. Edward Sweeney were appointed “police officers” — it was the first time they were referred to in such a way in borough police records. All three men would go on to serve as borough police chief. Maney joined the force in 1929 was promoted to sergeant in 1952 and became chief in 1955. 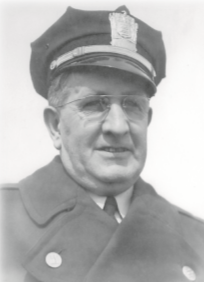 The borough’s first municipal court was established in April 1929 (in 2013 under a shared services agreement MB court is now in Tinton Falls). In October 1949, borough commissioners requested that a traffic light be installed at the intersection of Beach Road and Ocean Avenue — 27 years later it arrived. Another light at Ocean Avenue and Valentine Street was added in the summer of 1995.

Richard L. Keller, the town’s longest serving chief, was the first officer to receive professional police training (today it’s mandatory). Prior to that, new officers were given a badge and gun, rode a couple of shifts with experienced officers, and then set off on their own. Up until 1964, the department had just four officers, with only one patrolling at any given time. Back then the major police concerns were breaking and entering large vacant homes in the winter and traffic violations in the summer.

Chief Keller, the ultimate firm yet fair lawman, once told me a story about a member of the force: Sgt. Michael Murray, who served in the MBPD for 32 years. A real stickler for comportment, Mike always looked the part of a law enforcement professional — in a sharp, crisp and spotless uniform. Chief Keller said that if a VIP of any kind were ever to visit Monmouth Beach, he hoped the first person they would lay eyes on was Patrolman Murray. “He always took great care in how he appeared in public,” the chief explained. “He was the model for how a cop should look.” 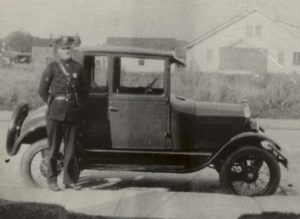 Plectron units were added to police cars in 1971. These signaling devices allowed the patrolman to set off the town-wide alarm system without going directly to the firehouse.

In 1973, the department finally added another patrol car. Prior to that, a loaner car had to be used when the police vehicle was in for repairs. Sometimes officers had to answer calls in their private autos. Also that year, the MBPD installed its first telephone switchboard, allowing residents to contact the police directly. In Summer 1974, the state transportation department finally installed a traffic light at the busy intersection of Ocean Avenue and Beach Road after years of accidents and close calls.

For many decades the police department was housed in borough hall where they quickly outgrew a large renovation in 1977. In October 1990, a new 2,200-square-foot building on Willow Avenue was opened. The new police complex included two jail cells, conference and office rooms, classroom, interview room and chief’s office — five times the space the force had in borough hall. The $140,000 construction project was funded by Jay W. Ross, the borough’s leading philanthropist who died in 2006.

• For the past 25 years, Dennis Collins has been the Monmouth Beach borough attorney. The Manasquan lawyer is a CBA and Seton Hall U Law School graduate. William R. Blair, Jr. was town lawyer for over 30 years before retiring in 1982. The Harvard Law School grad and borough resident died in 1992. His father was a US Army colonel who invented the pulse-echo radar system in 1937. His replacement, Rocco Ravaschiere, was the town lawyer until 1997. Both men were from the Red Bank firm of Parsons, Canzona, Blair & Warren.

• Clarence Case, a Chief Justice of the NJ Supreme Court from 1946 to 48, worked his way through law school as a clerk at the Monmouth Beach Clubhouse Hotel in the early 1900s. A Rutgers graduate and NJ state senator, he served on the state’s highest court for 33 years. He died in 1961. His nephew, Clifford Case, was a longtime US senator for New Jersey.

• Harry Lane, Jr., the borough’s municipal court judge for over 20 years, was made a US Magistrate in 1972 at age 57. A Jersey City native and Princeton graduate, Judge Lane also got the first new penthouse at the Channel Club Tower when it opened in 1973. He died in 1975. Monmouth Beach has had its share of distinguished judicial talent. Borough residents Francis X. Crahay, Patrick J. McGann, Jr., Michael A. Guadagno, and Honora O’Brien Kilgallen, at one time or another served on the bench in Monmouth County as NJ Superior Court judges.

• Mercer Beasley, the Chief Justice of the NJ Supreme Court for 33 years beginning in 1864, had a summer home in Monmouth Beach. He died in February 1897.

• Noah Swayne bought a Monmouth Beach house for $3,000 from Jay Gould in 1878. Swayne, the only Quaker and first Republican to serve on the US Supreme Court, was appointed by President Lincoln in 1862. The Ohio lawyer served for nearly 20 years.

• Harlan Fiske Stone, a 20th century giant of American Constitutional law, has a Monmouth Beach connection. His grandson, Harlan Fiske Stone, II, is a borough resident. The senior Stone reached the pinnacle of American jurisprudence in 1941 when he was appointed to the lofty position of Chief Justice of the US Supreme Court by President Franklin Roosevelt.