This syndicate, which owned most of the land between North Long Branch and Sea Bright, sought to create a community of  “uncommon exclusiveness,” according to an 1878 New York Times report, noting the location as “an aristocratic colony, with aristocratic cottages, inhabited by aristocratic people.” The association decreed that “no stores, saloons, liquor shops, hotels or other such annoyances were allowed.”

Seeking to escape the hustle and bustle of neighboring Long Branch (which first emerged as a national resort when First Lady Mary Lincoln visited in August 1861, according to Entertaining a Nation), many wealthy and well-known families were lured to the quiet seashore community during those fashionable times — mostly during the summer months.

The association had acquired the land that now encompasses Monmouth Beach from Dr. Arthur V. Conover in 1865. The Freehold physician had bought it from the heirs of Major Henry Wardell, the great-great grandson of the area’s first settler, Eliakim Wardell.

With the goal to create an exclusive resort at the Jersey Shore, the association’s managing partner John Torrey, Jr. retained a New York civil engineer (Harry Forsberg) to survey the land and the town’s first streets and property lines were laid out. Thus began Gilded Age glory days in Monmouth Beach. The center of attention for these wealthy families was the magnificent Monmouth Beach Clubhouse Hotel on Beach Road.

“Wealth is well known to be a great comforter.”
—Plato

To help facilitate travel and make Ocean Avenue “a grand boulevard,” at a cost of $20,000, the railroad line was moved west inland to the present-day Seaview Avenue. Massive houses (“wooden palaces”) were constructed mostly along a 100-foot wide Ocean Avenue. “All along either side are the great estates of city bankers, merchant princes, lawyers and industrial magnates, each splendid domain the site of a veritable summer palace,” according to the Book of the Royal Blue (1910) description of then Ocean Avenue.

It was sometimes called “The Golden Road,” according to The Golden Age of the Monmouth County Shore: 1864-1914 by T.J. McMahon (1964) that “ran from Highland Beach south to Asbury Park passing through one of the most picturesque areas in the United States. The road afforded an excellent view of Ocean Avenue, framed in the foreground by the majestic homes and ornate landscaping which were a part of Ocean Avenue for many years.”

Titans of finance, industry and entertainment spent their summers along that road in Monmouth Beach during those days of grandeur. Their dwellings were the large “cottages” (of the 30-room variety) that dotted our coastline. According to an April 1873 New York Times account, the cottages are “exquisite in beauty and finish … at a ridiculously moderate cost.” Many of the properties were so expansive they ran from ocean to river.

The reputation of Monmouth Beach as a playground for the high and mighty grew and by the late-1880s, property in town was selling for $7,000 an acre. Weather, time, and tide did their work to undermine many of those grand homes along Ocean Avenue. By the 1930s, the association had largely faded from glory and power. 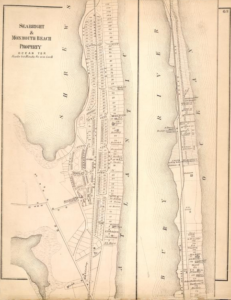