The magnificent Normandie-by-the-Sea Hotel in Sea Bright was “exclusive and expensive” in its all-too-brief prime. It had a lot to live up to. The Ocean House — the Jersey Shore’s first official hotel which opened in 1842 — had previously covered the same grounds. 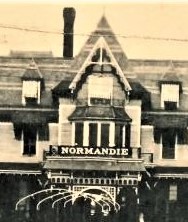 The Normandie Hotel — a spectacular Gilded Age lodging place — could accommodate 300 guests in its sprawling layout and offered both ocean and river views. Considered a showplace of the upper shore, the massive wooden hotel entertained many of the country’s elite during its glory days. Built by Lemuel Smith, it opened in July 1877 first known as the Hotel Bellevue. From then on the location would be remembered for its “big verandas and pretentious architecture.”

Later on Richard “Boss” Croker acquired control and made big changes, according to an Asbury Park Press story from October 1979. Born in Ireland the son of a blacksmith, Croker came to American in 1846. A part-time mechanic, fireman and boxer, he became a street enforcer for the Boss Tweed gang. By 1891, he was head of New York City’s corrupt Tammany Hall political gang.

While climbing as a political power broker, he acquired a taste for fashionable hotel life at the beach from his 20 summers spent at the elite Mansion House hotel down the road in Long Branch. The law and times ultimately caught up with Croker and he fled the country in 1905 moving to England. He later returned to his native Ireland and died in a Dublin castle in 1922.

In 1887, General Ferdinand P. Earle, who came from a family of hotel proprietors, acquired the hotel for $115,000 and changed the name to the Normandie (after a hotel he owned on Broadway in NYC). The Normandie (it had a nearby railroad depot too) was located a mile north of today’s Sea Bright-Rumson bridge on the west side of Ocean Avenue. When it burned down in September 1916 the hotel had been vacant for two years.

(Normandie is an unincorporated community located within the borough of Sea Bright, NJ).

The SS Elberon cruises past the Normandie-by-the-Sea Hotel (r) toward Sea Bright, 1895. The steamer ship was part of the Patten Line. 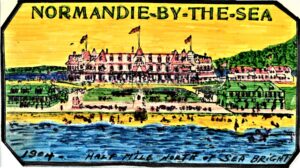 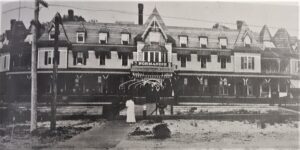 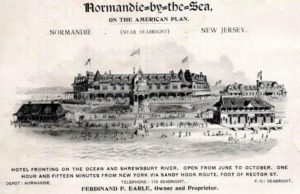 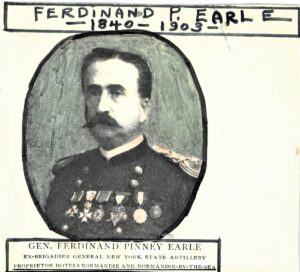 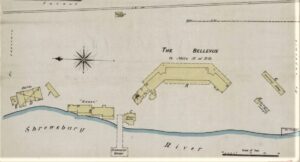 “Normandie Beach Hotel.” Long Branch Daily Record, June 1905. “Getting only the best of everything,” was the pledge. 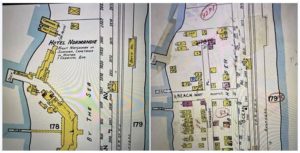 Normandie-by-the-Sea hotel maps: “Side-by-side comparison of the Hotel Normandie site went it still operated (c. 1909) and a post 1916 fire version of the area after the modern streets of Beach Way and Normandie Place had been constructed. The two maps offer perspective on the hotel’s original footprint. The railroad depot is still there in the later map as is the hotel’s old ocean side bathhouse. Additionally, the same dock structures along the Shrewsbury on both maps. The hotel footprint shows how massive a structure it really was.” by Marc Leckstein, SB councilman and SB Historical Society president. 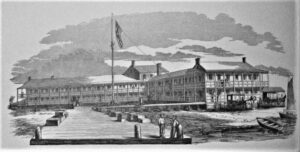 Before it was the “Normandie,” the land held the Ocean House Hotel. The first hotel on the Jersey Shore was built by Major Henry Wardell in 1842. The low, rambling wooden structure sat opposite the Navesink River. It offered lodging, bathing, boating, and fishing to 300 guests. It remained a popular tourist spot through the 1850s.