The concept of a borough-owned public bathing facility became a reality in May 1921, when the Monmouth Beach Borough Council approved a sum of $6,800 to build a beachfront club to be called the “Pavilion.”

The selected location was on the east side of Ocean Avenue about 100 feet south of Valentine Street. The first MBBP included 60 bathhouses. Then Mayor A.O. Johnson was a strong advocate for a public bathing facility in town; later on his son, Mayor Sidney Johnson, would also help the pavilion grow. 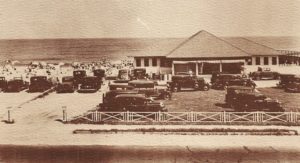 The borough had obtained the coastal property in 1918, part of which was once owned by the actor Oliver Byron (who performed alongside John Wilkes Booth). Byron’s surfside cottage at that spot had burned to the ground in May 1903.

Several wealthy cottage owners in the area had sued to stop construction on the pavilion saying the land was restricted but a NJ Chancery Court ruled against them. The pavilion construction work was completed in 36 days by Long Branch builder, John Chasey. The facility — sometimes called “Little Monmouth” as opposed to “Big Monmouth” (ie, the MB Bath & Tennis Club built further north in 1910) — remains a very popular spot today.

Battling time and tide early on, the borough built its first protective stone seawall in August 1924 at a cost of $110,000. A brutal February 1927 storm caused about $3,500 worth of damage to the pavilion. The repairs were made by Bill Heitzman, the borough’s first mayor.

In 1928, the borough council approved the first lifeguard and rescue boat for the pavilion. The town leased out the pavilion operations to private parties until 1929 when it took control. The pavilion turned a $315 profit that year and by the next year (during Depression times) profits exceeded $2,700. In 1931, borough commissioners paid Thomas Procter, Inc. $9,000 to build a steel core jetty at the pavilion.

The original pavilion, as well as several nearby large Ocean Avenue houses, was wrecked by a massive March 1962 storm — the “Ash Wednesday Storm.” The pavilion was completely rebuilt in less than three months, just in time for the Summer 1962 season, thanks to the efficient work of borough residents Al Benoist (the designer) and Bill Hansen (the builder).

In November 1962, coastal sections from the Highlands Bridge to Long Branch (including Monmouth Beach) were the recipients of a $1 million federal beach restoration project. The US Army Corps of Engineers pumped over 1.5 million cubic yards of sand onto area beaches dredged from the nearby Shrewsbury River. The project was backed by the Kennedy Administration.

In tribute to the late President John F. Kennedy and his national physical fitness program and to boost pavilion revenues, a 25-meter outdoor pool (half Olympic-size) was opened in June 1964; the cost was $42,000. Thanks to the new pool, MBBP revenues doubled to $52,000 that first summer. The original pool was salt water.

Severe winter storms in 1977 and 1992 caused further damage to the facility — especially the pool area — but each time repairs were made in time for the subsequent summer season. In 1977, a 920-foot long, 20-foot high seawall was added from south of the pavilion to the Long Branch border. Mayor Sidney Johnson, a longtime MBBP advocate, helped obtain a $666,666 federal grant for the construction work. In the late 1990s, the pavilion’s season and operating hours were expanded.

“In every curving beach, in every grain of sand there is the story of the earth.”
—Rachel Carson

Carl Mihm was the first manager and was paid $45 per week. The pavilion’s longest serving manager was the “firm but fair” William Heath, who held the top job from 1961 to 1983. Eva West was the diminutive but determined MBBP manager for 20 years beginning in 1928. The McConville brothers — Jim (a former mayor) and Pat (a former police chief) — were also managers.

Old pavilion from the beach.

Over the years, the two biggest problems facing Pavilion beachgoers have been a lack of beach area and parking. To address the ongoing demand for more parking space through the years, the borough purchased property south of the pavilion. In 1960, the town paid $15,000 for a lot (that of Florence Sellner) and three years later the Ocean Avenue lot (that of John Simkovich) was purchased for $12,500. Despite the best efforts of borough officials, parking is still an issue today.

In the 1980s, depending on the tides, there was almost no beach at the pavilion. Summer days brought a mad dash to see who would arrive first to claim a seat on the “postage stamp” beach. That all changed in May 1994 thanks to the tenacious lobbying efforts of Mayor Louis Sodano. The largest “sand replenishment project” in the nation’s history all started in Monmouth Beach (over 515,000 cubic yards of sand were pumped in).

As part of a billion-dollar federal, state and local beach replenishment project, the town’s beaches were amazingly refilled with sand. At a joyous August 1994 ceremony, Mayor Sodano and Gov. Christine Whitman officially christened the massive new beach. Ongoing fill work has been done over the decades and despite some serious storms the beach has held up very well. To help preserve the sand in the 1990s, scores of volunteers, led by resident Patti Bramson, planted thousands of dune grass plants. Donations of several palm trees by the Golf Outing Committee and later the MB Business Association added to the beach’s ambience.

In good years, total seasonal revenues for the pavilion have cleared the $1 million mark. The facility regularly returns a solid profit for the season ($500,000+), which commissioners use to hold down municipal property taxes. 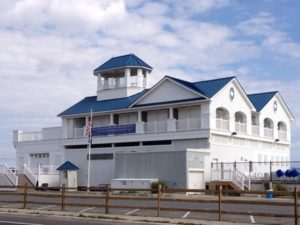 In November 2007,  borough voters overwhelmingly rejected a $2.8 million referendum to make major repairs and upgrades to the crumbling facility, even so, a massive renovation and expansion project was undertaken in the ensuing years.

Due to serious damage from Super Storm Sandy in October 2012, the borough had to make more repairs and changes to the facility (costing $1.5 million with most covered by insurance) which were completed in time for the 2013 summer season.

In 2019 under orders from the federal government, the stone seawall along the entire MBBP property was connected. The cost to fill the 700-foot gap was $30 million all paid for by FEMA and the state DEP. The general contractor for the work was J. Fletcher Creamer & Son, Inc.

Construction of new access ramps for foot and vehicle traffic and repairs to sidewalks along Ocean Avenue were included in the project.