There are people who called our New Jersey coastal area home long before we did — the Native Americans of Monmouth County. 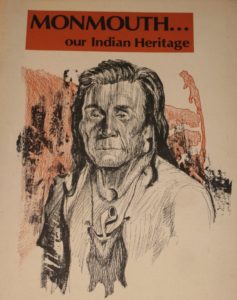 These are the facts, according to the book, Monmouth … Our Indian Heritage, researched and written by George H. Moss, Jr. (1923-2009). The late and much-admired Monmouth County historian used his 1991 book to tell the noble story of the “original people” of our shore area — in an educational and entertaining manner.

The Indians of New Jersey in general, and Monmouth County in particular, were the Lenape. The origins of their tribe still dot our area — locales like Port-au-Peck, Navesink, Rumson, Matawan, Manasquan, Takanassee, and Wanamassa to name few. They are part of the Delaware Tribe of Indians.

The first recorded European observation of New Jersey Lenape Indians was by Giovanni da Verrazzano when he was exploring the New York Harbor-Sandy Hook area in 1524. In September 1609, explorer Henry Hudson and his crew landed in our area. While many people think that the history of the Indians starts when the Europeans first permanently settled in America in the early 1600s, the Indian legacy goes much further back.

In actuality, using radiocarbon dating methods on artifacts such as spear points and tools, archeologists have been able to trace the Indian population of Monmouth County back 12,000 years. And consider that the ancient pyramids of Egypt in Giza were built about 4,500 years ago.

Adding to the mystery, Claire Garland, the director of Sand Hill Indian Historical Association in Lincroft, made some thought-provoking comments in a Two River Times profile. She claimed that during the last Ice Age (which ended about 11,700 years ago) North Pole glaciers captured so much water in ice that the inhabitable Atlantic self was some 80 miles further east then it is today — and Native Americans built communities on these lands (yet there’s little evidence of this).

This relates to a persistent Monmouth Beach legend: about there being “cornfields” to the east of the borough’s current coastline. The claim being that a great deal of land (if not cornfields) once lay east of the borough’s seawall. Marguerite Sweenney, a former borough clerk who died in 2006 at age 95, said to me that her father, Perrine Cooper (who was born in MB in 1875) told her there was once spacious land east of Ocean Avenue.

And according to an Asbury Park Press story from March 20, 1949 entitled Monmouth in the Making by Alvin B. Cliver, Freeholder John A. Eaton of Elberon told the writer that he remembered planting corn and potatoes on his father’s farm “some 300 yards east of the present shore line.”

According to Monmouth County historian Samuel Smith, this land had been the Native American’s “home for hundreds, perhaps thousands of years.”

In fact the Lenape were seasonal dwellers, moving thorough out that area. During the shore season they proved adept at fishing (favoring shellfish). They did hunting, farming and trading as well. The Lenape were known as peaceful people who welcomed others to their homelands. They were perhaps too accommodating. About 7,000 native Indians were living in New Jersey in 1600, however, by the time of the American Revolution, there were fewer than 60. Indeed, the settling of Monmouth County in general, and Monmouth Beach in particular, shows the Indians giving more than getting. See here.

“All the largely autonomous bands of Native Americans living on the North Jersey Shore in those times were part of the wider Lenape group, which extended over all of New Jersey, eastern Pennsylvania, northern Delaware and southeastern New York,” according to Dr. Paul Boyd (1940-2011), an Atlantic Highlands historian whose research covers the Lenape in Monmouth County during the 1600s. He did his doctoral dissertation on Monmouth County’s Lenape Indians and wrote the book, Atlantic Highlands: From Lenape Camps to Bayside Town.

“Their links include common language, similar community set-up, and social inter-relationships and loose political association between groups. In Monmouth County, there were a number of localized bands — Navesink, Ramezonk, Topanemus, Wickatunk, Chingarora — but they were all Lenape,” explained Dr. Boyd.

Note: For shore history lovers, the work of George Moss is worth further review — a lot further. The man knew history and loved to tell stories. George once told me it was a duty for historians to share what they know. The longtime Rumson resident and borough councilman was a prolific researcher and author on Monmouth County history. Other fine Ploughshare Press books of his include:

• Another Look: At Nauvoo to the Hook (1990), Steamboat to the Shore: A Pictorial History of the Steamboat Era in Monmouth County, New Jersey (1991).

• Double Exposure Two: Stereographic Views of the Jersey Shore (1859 to 1910) and Their Relationship to Pioneer Photography (1995).