The Trials of Dr. Carl Coppolino

While exploring my physician-father’s medical book collection at our home one day, I found an oddly titled one, The Practice of Hypnosis in Anesthesiology written by Carl A. Coppolino, MD. And it was even inscribed by the author.

When I mentioned it to dad, I got an even odder reaction. It was something he didn’t care to discuss. Dr. Coppolino, who also suffered from a serious heart condition, had once been his patient. A very infamous physician — the Coppolino cases were a sensation back in the mid-1960s and my father played a small role in the epic events.

Coppolino and my father were members of the medical staff at Riverview Hospital in Red Bank, NJ back in the early 1960s. Dad and his medical partner, Dr. George A. Sheehan, Jr., were considered top cardiology doctors in Monmouth County at the time, so it was logical that Coppolino sought them out (dad would diagnose him with angina pectoris).

As fate would have it, the two men followed similar educational paths. Coppolino graduated Fordham University (1954) in the Bronx and the SUNY Downstate Medical Center (1958) in Brooklyn, just like my dad (1940 and 1943). I don’t know the type or outcome of care provided by dad back then, but Coppolino’s health was so poor that by age 30 he had already suffered several heart attacks, retired as a practicing anesthesiologist, and was collecting disability. A true polymath, Coppolino had also written several books and scientific papers on anesthesiology and was considered an expert on the matter.

The subject of sensational national headlines a half century ago, Coppolino was tried for murder in two states — who squabbled over who would try the wayward doctor first. He was first acquitted in New Jersey and then convicted in Florida. In New Jersey, he was accused of murdering the husband of his mistress. In Florida, he was charged with killing his 32-year-old wife Carmela, also a physician.

Coppolino later called his NJ trial “the most laughable murder case” in state judicial history. Judge Elvin Simmill of the Monmouth County Superior Court in Freehold presided over the case; he was a former Speaker of the NJ State Assembly.

“If a doctor goes wrong he is the first of criminals. He has nerve and knowledge.”
—Arthur Conan Doyle

The accused doctor was defended in both cases by the celebrated trial attorney, F. Lee Bailey. Troubled later in life (this Washington Post story called him “broke and disbarred”), back then Bailey was just coming into his own as the nation’s best criminal defense attorney. The Boston lawyer made his first headlines defending another physician convicted of murder. Dr. Sam Sheppard, an Ohio osteopath, had been in jail for over 10 years for the slaying of his wife Marilyn. Bailey argued Sheppard’s case before the US Supreme Court, got him sprung on appeal in 1966, and then won a retrial. Sheppard died in 1970 a free man.

As a teenager I had thoughts about becoming a lawyer, so I followed Bailey’s career and found him a fascinating and flamboyant man (see his autograph below). He covers both doctor-murder cases in his 1971 book, The Defense Never Rests. It was a best-seller then and is still very interesting reading today. Bailey died in June 2021 at age 87. 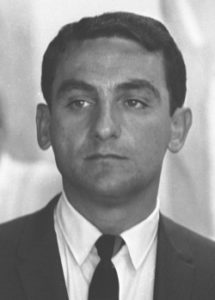 The December 1966 New Jersey case was murder-mystery novel paradise. Coppolino was charged with murdering retired U.S. Army Lt. Colonel William Farber in July 1963. He was the spouse of Marjorie Farber, the women with whom Coppolino was having a secret passionate affair. Marge was the Coppolino’s Middletown neighbor (on Wallace Road), very attractive, and nearly 20 years older.

Police investigators believed Coppolino had smothered Col. Farber in his sleep; Bailey argued that his death was natural. Mrs. Farber would testify that Coppolino had involved her in the deadly deed through hypnotism. In winning the case, Bailey would uncork the classic “hell hath no fury like a woman scorned” line about the jilted Mrs. Farber. Coppolino was acquitted in December 1966. It was the first murder trial loss for Monmouth County Prosecutor Vincent Keuper since his appointment in 1953.

In February 1967, the legal action moved to Naples, Florida where it was alleged that Coppolino in August 1965 had given his wife a lethal dose of succinylcholine chloride, a deadly muscle relaxant then undetectable in the human body (at their Bowsprit Lane home in Longboat Key, Fla.). NJ prosecutors also suspected, but could not prove, that Col. Farber got a “perfect poison” injection as well. Seeking a better climate for his health, Coppolino had moved his wife and two young daughter from New Jersey to Sarasota, Florida in 1965.

Prosecuting the state’s case in Florida was Frank Schaub. Coppolino after having testified at his first trial — where Bailey found him to be an excellent witness on his own behalf — declined to take the stand in Florida. Shattering Bailey’s “brag about having an impressive 19-string victory in homicide cases,” Coppolino was convicted in April 1967 and sentenced to life in prison. He served just 12 years.

The matter of Carl Coppolino was something that made my father uncomfortable. Dad admitted to me that just as Coppolino was going to be tried in the first murder case he received a long jailhouse-written letter from him: “explaining his woes,” dad said. When I did my journalist’s probe on dad for the juicy details, he couldn’t remember the contents. “I burned it,” he said, “your mother insisted.” I can only imagine.

Later on I found out that dad was also summoned to the Monmouth County jail where Coppolino had taken ill during the murder trial in 1966. Dad would testify that Coppolino’s jail time in Freehold was contributing to his poor health. He was still Coppolino’s physician. Again, my mom didn’t want him to be part of it, but dad did it anyway.