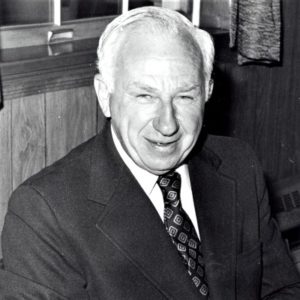 He is the supreme Monmouth Beach philanthropist of his age and all others. A guy who walked the talk — to the tune of more than half a million dollars for town benefit.

When Henry Mihm planned to develop the Shrewsbury River boat-basin area in the 1940s, Jay W. Ross at first objected. Later on he’d build his own successful marine business. In February 1962, his riverfront property on West Street was also granted a business zone variance. He got started in area in 1941 buying land from the borough for $400.

It was Margaret Ross, Jay’s mom, who first won commission approval in March 1950 to build a yacht club on her West Street property. Commissioner Henry Mihm — a Ross neighbor — disqualified himself from voting on the matter but offered his approval of the board’s action.

By 1963, Ross had opened a boat marina. The business offered boat sales, repairs, rentals, storage and sailing lessons. He credited good timing for the success — the years 1965 to 1975 were boom boat times. “Back then, boating was very popular because it was a family-oriented activity,” Mr. Ross told me. By 1975, Ross was selling over 300 sailboats annually and the business was grossing $700,000, according to a Red Bank Register story.

Monmouth Sailing Center, 1960s postcard. Not a boat out of place.

His marina, the Monmouth Sailing Center, now run by his longtime business partner James Brower, is still prosperous today. Jay’s sisters, Elinore and Margaret, were also involved in the business.

Jay was a much respected and very colorful borough resident since 1932. A man possessed of large charity and ideals, the community owes him a whole lot. Recognized as the borough’s leading benefactor for some 50 years, Jay donated a large part of his hard-earned fortune to the betterment of Monmouth Beach culture and community. The town is very fortunate to have had him around.

“Every charitable act is a stepping stone towards heaven.”
—Henry Ward Beecher

Thanks to his good will generations of future borough residents will benefit greatly. Borough leaders could always count on him too. “Jay always put his money where his mouth was — everyone else just talked,” said his friend, the late Sidney Johnson, a longtime borough mayor and commissioner. Mayor Jim McConville once called him “the town’s best friend.”

Ross came to Monmouth Beach from Brooklyn, NY where he was born on July 6, 1915. Often referred to as the borough’s “philanthropist-in-residence,” his record of giving over time was legendary. Through the years his donations exceed $600,000.

In May 1974, he retired the mortgage on the MB First Aid Squad building. The building was dedicated in honor of his mother, Margaret, who died in 1967.  In 1989, he funded the construction of a new MBFC museum. In 1990, he built a new MB police station and also funded a new wing built for the Sidney B. Johnson Library in town. In 1993 he financed the construction of a municipal library in Sea Bright, NJ, the Jay W. Ross Library (since destroyed by Hurricane Sandy).

In 2000, he began his most ambitious and thoughtful undertaking — helping to save the old U.S. Life-Saving Station on Ocean Avenue. Built in 1895, the borough’s oldest public facility (now the Monmouth Beach Cultural Center) was about to fall to the wreckers’ ball in April 1999 when he funded a large-scale rehabilitation effort in the amount of $110,000.

A long-time patron of the arts, Ross was a self-taught musician and painter. “Now, more than ever, we need to teach the children about art and culture,” he said about the need for the center. “Otherwise, those pursuits will be largely forgotten.”

Thanks to his vision and generosity the dream of a first-class cultural center along the seashore was fulfilled. “We’d never be where we are today without the vision and caring of Mr. Ross,” said the late Richard L. Keller, who was the founding director of the MB Cultural Center and former borough police chief. “There’s nothing like it up and down the Jersey Shore. He made it happen.” Jay Ross died in June 2006 at age 90. 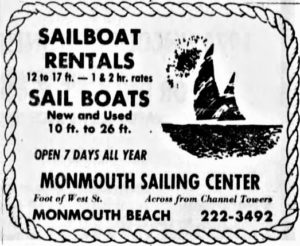 During his building career in town, Ross constructed nearly 40 homes. In the 1930s and 1940s, during difficult financial times, he purchased several large abandoned houses in town to get them back on the tax rolls, maintained, and rented. In the 1950s, Ross developed the Margaret Place area of town near the Monmouth Beach School. He bought the land from the borough, which included 19 building lots and a paper road, for the staggering sum of $500. “Except for the school area, it was a swamp,” he explained “No one wanted it. I had to fill it all in.” At that time, those new houses sold for $10,000 and a monthly mortgage payment was $65.

In the end, many say, it was his willingness to help, his love of culture and his steadfastness in his principles that made Jay Ross the unique man he was. Two of this determined man’s formulas to success — “always keep your word” and “always pay your bills” — should be posted in every schoolroom in the country. 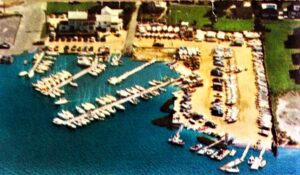 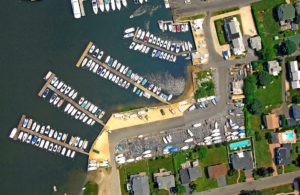 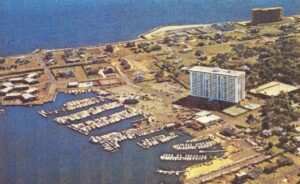 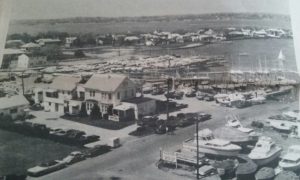 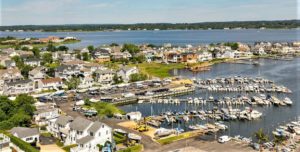 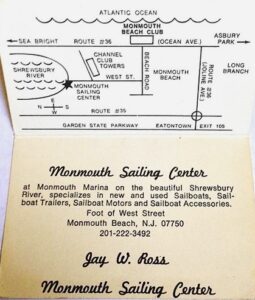 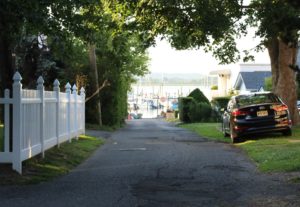 “Crab Alley” at the foot of Borden Street, 2017. The path leads down to Monmouth Sailing Center. 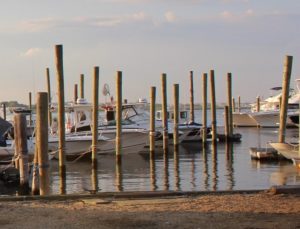 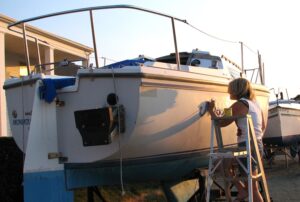 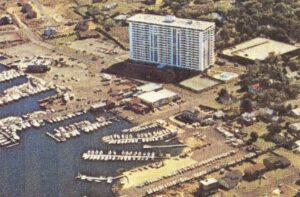