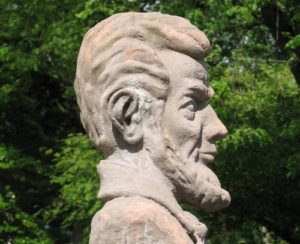 In the early 1700s, Mordeci moved from the Massachusetts Bay Colony to “the market town of Freehold … in what would become New Jersey,” White explains. There he met and married Hannah Salter continuing the Lincoln bloodline. According to the Monmouth County Historical Association, our county was first settled in 1664. In time, Mordeci proved to be a prosperous landholder in our region. He ultimately moved to southeast Pennsylvania and died a wealthy man in 1735 at age 49. Also his son John Lincoln, the president’s great grandfather, was born in Freehold in 1716.

As to President Lincoln himself ever visiting Monmouth County, I’ve seen no proof. Although there may be some — legend is that he once visited Long Branch when he was a US congressman in the late 1840s.

“When I do good, I feel good. When I do bad, I feel bad. That’s my religion.”
—Abraham Lincoln

According to the book Entertaining a Nation, Long Branch first became a national resort hot spot with the visit of First Lady Mary Lincoln in August 1861. I also learned through the New York Times web archives (a captivating resource) that Robert Todd Lincoln, the president’s first son, summered at the Jersey Shore in the 1890s (including in Monmouth Beach).

I know there’s much more to unearth about the Lincolns in Monmouth County. A college buddy of mine from Tinton Falls says that some of Lincoln’s ancestors are buried in the Holmdel Community Church Cemetery (originally a Baptist church) on Holmdel Road (Route 527). Does anyone know more?

* Why do I call Mr. Lincoln our “greatest president?” Here’s why. Before Lincoln became president, we had slavery and a divided nation (and we think we have problems today?) When he died, slavery had been abolished and the country was united again. Now tell me of a finer legacy than that. 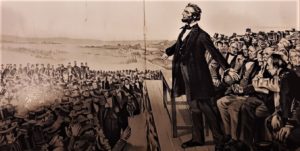