From Umbrellas to Billionaires — the Life of Jim Maguire

The guy traveled a long way since his first job as an umbrella boy at the Monmouth Beach Club. James J. Maguire, Sr., who became a Wall Street legend, always considered himself a “regular guy.” God called Jim home in August 2017 at the age of 86. He leaves his wife, Diane, six children, 22 grandchildren — and legions of admirers. 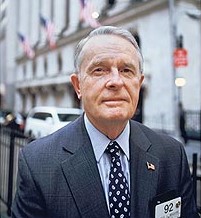 The highlight of Jim’s illustrious business career includes a long professional  and personal relationship with Warren Buffett — who is considered “America’s Greatest Investor” with a net worth near $100 billion. A CNBC report on Jim’s death called him “one of the great titans of the New York Stock Exchange floor” and explained that he “was widely respected for his wit, wisdom and leadership.”

Buffett often referred to Jim as the “World’s Greatest Specialist” — even to my daughter Lauren, who got to meet the “Oracle” in “Omaha” as part of a Fordham University women’s group visit in 2015 (Jim had graciously coached her some).

During a long interview several years ago, Jim told me that the Monmouth Beach Club (known as the MB Bath & Tennis Club) “was a large part of my life.” His first job, for which he “had to fight,” was a club umbrella boy in the summer of 1945. The pay was $16.20 per week. “I remember working hard but always loving it,” he said. “They were such great times. I met so many fine people and leaned so much.”

After five summers at the club, he went to work on Wall Street in September 1949 as a clerk and was at first “overwhelmed” by the experience. With some encouragement, hard work, and time, he gain knowledge and excelled. Although he never had a day of college, he still was as an adjunct professor at Fordham University.

A former MB Club president and always club activist (from winning the club’s tennis championship at age 13 to pushing for facility improvements), Jim said this spot was a “very important factor in my development as a young man.” Jim told me of the days when members of the New York Yankees would visit the club. The famous Bronx Bombers found Monmouth Beach through the family of Bobby Brown, a third baseman and later physician, who lived on River Avenue. Yankee visitors in the late 1940s included Whitey Ford, Mickey Mantle, Yogi Berra, Allie Reynolds, Vic Raschi, and Eddie Lopat.

Jim was called the “Chief” by his Wall Street colleagues, for his ability to get along with people and to get things done. He first met Buffet in the summer of 1988, a year after the Crash of 1987 (the worst market decline in all U.S. securities history), when the super investor was looking for a bigger market for his Berkshire Hathaway stock. As a stock specialist on the New York Stock Exchange “it was my job to make a public market for him and others,” Jim explained.

On Buffett’s finding him, Jim said it was a phone call “out of nowhere. I was told he did his research, was a very careful person, and very particular about who handles his business. I guess he thought I was capable.” When Jim was told the stock was high priced (then trading at $4,700 per share), he at first thought it was a relation to Jimmy Buffett. “I didn’t think there was that much money in music,” he first remarked. After doing his own research, Jim took on the task as the market maker for the ultimate “blue chip” stock. Jim told me that Buffett, known as the Oracle of Omaha for his legendary business prowess, was just “a regular guy.” Jim called him very witty, loyal, not at all pompous, and generally undemanding, “although I wouldn’t want to be on the other end of a bargaining table with him.”

Since Buffett started his investment holding company Berkshire Hathaway (originally a Massachusetts textile firm) in 1965, it has had a compounded annual increase of about 20%. A $1,000 investment in Buffett’s company in 1965 would be worth over $10 million today. Buying in today is no small proposition, however, a single Class “A” share of the stock is over $400,000; the Class “B” shares are more affordable. The company, valued today at about $600+ billion, has large holdings in Coca-Cola, Kraft-Heinz, IBM, Geico, Anheuser-Busch, Well Fargo, and American Express.

According to a report in the Wall Street Journal, “unlike more speculative investors who buy and sell stocks based on short-term news and goals, Berkshire shareholders are the classic buy-and-hold investors: Rarely do they sell their shares except to fund their retirement or pay for a child’s schooling.”

From the business association, Jim said, “a lasting friendship was born” and the two men talked every month. “He’s just a very decent guy, but he does steal my jokes,” Jim said. He and his wife, Diane, would often attend Berkshire Hathaway annual meetings, where Buffett assumes a “rock star” status. In later years, he visited Buffet for quiet annual three-hour lunches in Nebraska, where the billionaire works and lives in a modest office and home.

The Maguire family first arrived in Monmouth Beach in 1927, when Jim’s father, Frank, rented a summerhouse. Respected in town for his generosity and determination, Jim told me he had “no intentions of leaving” Monmouth Beach.

His outlook on life was wise: “I don’t think I’ve worked a day in my life,” Jim explained. “I enjoy interacting with people irrespective of ethic or racial origin. I am confident the Holy Spirit will guide me in this regard. I strive for humility in all aspects of my life. I’m forever thankful for having been blessed with two exceptional parents whose example and wisdom have formed the bedrock of my personality. And although my wife, Diane, and I are compete opposites, she is my love and my life.” 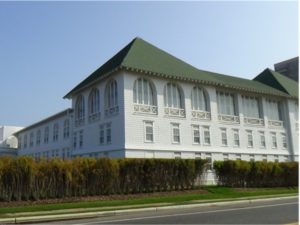 In 1972, while working at a firm associated with the American Stock Exchange, Jim was asked to be a partner at Henderson Brothers, a top family-run NYC specialist firm for the New York Stock Exchange. “That was the most fortunate day of my business career,” he said, “when Charles and Peter Henderson invited me to become a partner. Without their enduring support and confidence, my Wall Street accomplishments would have been markedly limited. Back then I had no money, no ability, and no product, but I could talk and that’s what they wanted.” He laid out $190,000 for a seat on the NYSE, worked hard, and ultimately became the firm’s chairman. In 2000, the firm was sold to LaBranche & Company for $230 million, according to a Wall Street Journal report.

Jim said he was blessed with a great home and a fine family foundation. “Monmouth Beach is my home,” Jim explained. “It’s a world class place. There’s nothing like it — and I’ve been around. Monmouth Beach values endure. The quality of the residents is always outstanding.” During his Wall Street years, Jim and his wife (“she’s been the guiding light in my life,” he said) would spend about four months of the year in Monmouth Beach and the rest at their home in Short Hills, NJ.

Born in South Orange, NJ on October 13, 1930, Jim and his family rented various homes in town until St. Patrick’s Day 1943. “With a war raging around the world, my dad came home that night and told us we were now the proud owners of a house in Monmouth Beach,” Jim explained. “Mom was a little worried but we kids recall it as one of the happiest days in our life.”

Purchased for $5,000 — with some unusual financing, Jim said — the Club Circle home was the center of the Maguire universe. One of 9 children, Jim said “we lived like millionaires and really didn’t have much. Dad was a hard worker (the Jersey City native was employed in the textiles business in NYC), but money was hard to come by back then. We were always a very happy family, though. The highlight was coming to the shore for the summer. Dad loved Monmouth Beach so much.” His father, who died in March 1975, was the “best man I ever knew,” said Jim.

In 1967, Jim bought his own home in Monmouth Beach, also in the Club Circle area (on River Avenue), for $15,000. Thanks to several additions through the years he raised six children there: James, Jr., Liz, Michael, Regina, Paul, and Mary. During his working years, Jim would rise each day at 5 a.m. and get to the city on the Highlands ferry when he stayed in Monmouth Beach and then walked to his to Wall Street offices. He mostly kept that schedule until he retired in October 2012.