If ever there was an athlete who brought pride and glory to Red Bank Catholic High School athletics, it’s my sister and Monmouth Beach native, Sheila (Kelly) Sharemet. She is the real deal.

Sheila, a 1974 graduate, was inducted into the Red Bank Catholic High School Athletic Hall of Fame in 2017. She lives in Houston, Texas with her husband John (her son J.P., lives in Louisiana). Sheila (and her sister Shannon) are members of MB School Class of 1970. 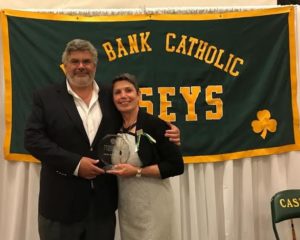 Greg Kelly and sister Sheila at the RBC Hall of Fame ceremony.

Strong and structured, determined and dedicated, funny and fair, Sheila is an impressive example of a productive person. Those traits she honed while competing on the athletic fields for the RBC Caseys. Throw in cancer survivor (she’s blown past 6 years from a deadly diagnosis) and I’m talking about one of my personal heroes.

Sheila was a varsity letter girl in three different sports for RBC — Track & Field, Cross Country and Gymnastics. And was a member of girl’s athletic teams that won 6 state titles during her time in Red Bank. Her competitive racing record was “amazing,” according to Jack Rafter, a RBC coaching icon.

She was a member of the RBC girl’s varsity Track & Field team all four years at the school (1971-1974). And in three of those years, the teams were NJ state champions. Sheila was also a member of RBC girl’s Cross Country teams that won state titles in 1972 and 1973 and the gymnastics team that were champs in 1974.

She was twice a NJ state champion in the 880-Yard dash (the half-mile). And amazingly, in 1971, she did it as a high school freshman while also setting a school record. Sheila was undefeated in dual track meets during her entire running career at RBC.

In 1972, she was selected as a member of the All-Shore Track & Field team and repeated as state champion in the 880. Also that year she took first in the 880 at the Trenton Invitational Meet and first in an open meet held at Monmouth College in the relay competition.

“Fortune favors the bold and you’ll never know what you’re capable of if you don’t try.”
—Sheryl Sandberg

She was a member of the RBC Cross Country varsity teams in 1972 and 1973. In 1973, she capped off her senior year with an undefeated dual meet season and had a second place finish in the N.J. state championship in cross country. She was selected as a member of NJ State All-Star Cross Country team in 1972 and 1973. She was also a member of the RBC girls’ varsity gymnastics team in 1974, a team that won the state championship in her first year.

“I’m always looking for good competition and I’m always disciplining myself to do better each time,” Sheila explained in a 1972 Asbury Park Press profile. The only thing that stopped her from competing at the highest levels in later high school years was serious physical injuries to her feet.

After graduating from RBC, Sheila earned a B.S. degree in Health and Physical Education from Lock Haven State College in Lock Haven, PA in 1979.

Sheila drew running inspiration and guidance from her uncle, George A. Sheehan, Jr., MD. The nationally-renowned “Running Doc” was the guru of the sport in the 70s and 80s. Doc Sheehan revolutionized the sport of running as a means of total fitness for mind and body. His signature book — revered by runners and sports enthusiasts — Running and Being: The Total Experience, was a New York Times bestseller and earned the title of “the philosophical bible for runners.” Her father’s longtime medical partner in Red Bank, Dr. Sheehan died in 1993. 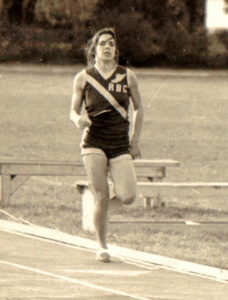 Sheila’s personal hero and a true RBC legend was Coach Jack Rafter who led the way in those glory years. Known throughout New Jersey as the father of girls track, Rafter called Sheila “one of the most intense competitors I’ve ever seen,” in a 1973 Asbury Park Press report.

Coach Rafter also said “her greatest quality is her desire to excel — she just doesn’t like to lose.” Describing her running style, Coach Rafter said Sheila “runs with a strong, flowing motion. She has a powerful forward thrust, much like Jim Ryan, with her excellent lift off the back leg. She makes it look easy with her gliding form — but it’s all powerful.”

Building on her athletic exploits and fitness interests, Sheila has worked in the health and fitness field for more than 30 years — mostly as the manager for a major energy company in Houston, Texas.  She was instrumental in designing and operating four onsite fitness centers which include a membership of 3,000 people. Recently, her company won the National Business Group on Health Platinum Award for Best Employers for Healthy Lifestyle Award.

I’ve come to hear many stories about her commitment in her work to the care of the human condition — mind, body and soul. She has made all the difference in helping countless clients to find and maintain wellness.

Throughout her life, Sheila has continued her interest in competitive racing. This includes participating in more than 40 Sprint triathlons and two Half Ironman Triathlons (placing second in her age group at 45). She also completed in 18 MS 150 Bike Tours (a 180-mile event from Houston to Austin).

Sheila and I are the children of prominent Red Bank physician, Dr. Charles W. Kelly, who was a very strong supporter of Catholic education. All five of his daughters either attended or graduated from RBC.