She was a teacher who was popular with the kids, trusted by the parents, and respected by her colleagues. That’s no small accomplishment. Joan Delehanty was a highly-capable educator who everyone in the local community could always trust to do the right thing.

Thankfully, she did it all at the Monmouth Beach School and for 30 years. The town is a better place for her service. I was one of her history students in the early 1970s. It was there she first lite the way for me — teaching a love and respect for history.

Very few teachers I subsequently came across in my academic career could serve up history more ably than could “Mrs. D.” Her talent for bringing subject matter to life was impossible to resist. She was a true inspiration.

A teacher who loved to travel, she circled the globe always gaining knowledge to pass on to her students. One amazing achievement she told me about was her traveling up the world’s three longest rivers — the Nile, Amazon, and Mississippi. 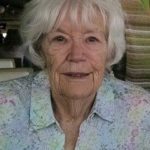 She was also very active in the whole MB community — serving on the town’s planning/zoning board and school board and as a volunteer at the cultural center.

When Mrs. D retired in 1998 (she began her MB education career in Sept. 1968 making $3,000 per year), she was teaching history (they call it “social studies” now) to 7th and 8th graders. She and her husband, Michael, lived on Riverdale Avenue where they raised five children.

Born in 1930 in Washington, DC, Mrs. D earned her undergraduate degree in education from Rosemont College in Pennsylvania and a master’s degree from Monmouth University in West Long Branch. Mrs. Delehanty died on November 6, 2018 at age 88.

“The secret in education lies in respecting the student.”
—Ralph Waldo Emerson

It’s a good thing Mrs. Delehanty was such a fine teacher — she had a lot to live up to. Her roots are in Montgomery County, Maryland — a community that goes back 200 years. It’s the state’s top county and very near Washington, DC, where her mom, Margaret “Peg” Schweinhaut, was born.

A very powerful member of the Maryland state legislature for over 30 years, her mother also lived a commendable life. From about 1960 to about 1990, Peg Schweinhaut was almost always representing Montgomery County as a Maryland State Senator. In 1968, she ran for a seat in the U.S. Congress but lost.

Senator Schweinhaut was active in Old Line State political and public affairs for over 40 years. “That presence, which combined dignity, integrity and a robust enjoyment of life, led the way for a generation of female lawmakers and earned the Montgomery County Democrat significant influence in Annapolis and across Maryland,” according to her interesting 1997 obit in the Washington Post.

Married to a federal judge and the a daughter of a grocer, Senator Schweinhaut first ran for office in 1955 “because she was bored and dissatisfied.” She would go on to become a formidable leader in helping the state’s senior population. A Democrat Party loyalist through and through, she was finally defeated for her senate vote against abortion in 1991. She died at age 93 still active in community issues.

These following borough people I have either heard about, leaned about, or knew  through my Monmouth Beach experiences. They are standout citizens who helped show me what the town is all about. I name them “patriots” because in my mind they always put the interests of Monmouth Beach before their own. I’ll add to this section from time to time and welcome ideas for any others who might belong: