Those wanting a grand glance of old Monmouth Beach must stop by the MB Cultural Center on Ocean Avenue.

From now until the end of May, the exceptional artwork of borough resident Gail H. Gannon is on display. The borough’s “artist-in-residence,” Gail is much respected for her canvas chronicles of historic Monmouth Beach.

People tell me that a lot about Monmouth Beach is disappearing. Others say it’s just changing. Whatever you believe, you’ll get a nice boost for the town if you go see Gail’s stimulating art work. Take the time to look back. Treat yourself and a tell friend.

Her attention to detail for historic borough times and places is peerless. Her colors are so rich and true it feels like time is standing still. It’s almost as if you can step right into a scene, so skilled is she in presenting the elements. Her images are at once peaceful and powerful. They serve as a springboard for memories. It’s impossible to pick a favorite.

That I got to observe her miraculous gift for capturing numerous iconic borough images brought me joy — in heart and mind. I’m very grateful that’s she’s sharing them with the rest us one more time.

The displayed collection is about 20 pieces, most depicting Monmouth Beach scenes and are done in acrylic. And it’s all being held at the borough’s oldest public building — one she helped to save. Cool stuff.

Gail goes back over 60 years in Monmouth Beach where she and her husband raised four children. Jack Gannon was very active in town, as a charter member and president of the MB First Aid Squad and a MB fireman.

Two of the family members who helped organize Gail’s art show I know well. John, III, is a friend and 1974 classmate from the MB School. He’s also a terrific chef and is very devoted to his mom. And daughter, Patricia, has family connections to me, loves her mom, and is also the owner/operator of Gannon Holsey Group, one of the shore area’s top real estate brokerage firms.

Note: Gail is part of a “Fab 5” exhibit now at the cultural center until the end of May. The four other area artists are Ginger Hall, Colleen Badecker, Arlene Smelson, and Kitty Parisi.

“To know what you’re going to draw you have to begin drawing.”
–Picasso

A few years ago Gail told me that she began painting in the 1960s and along the way got instruction and inspiration from an awarding-winning artist, Ida Libby Dengrove. So, for those interested, I did a little more digging about her.

In addition to being a fine-art portrait painter, Dengrove won acclaim as a courtroom illustrator for television. During her glory years, Dengrove captured images from some of NYC’s most notorious court cases (all on a 14-by-17 sketch pad; TV wasn’t permitted in New York courts).

For her work from 1973 to 1986 with NBC-TV News she won two Emmy-Awards, TV’s highest honor. She also authored a book, My Days in Court: Unique Views of the Famous and Infamous by a Court Artist (1990). Today her 6,000-piece art collection is housed at the University of Virginia’s Arthur J. Morris Law Library in Charlottesville, Va. For more info go HERE.

Born in Philadelphia in 1918, Dengrove was married to a psychiatrist for nearly 65 years. She died in Los Angeles in April 2005. 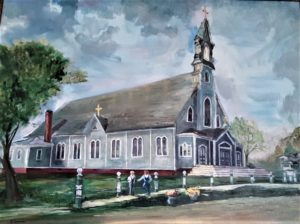 Church of the Precious Blood by Gail Gannon.