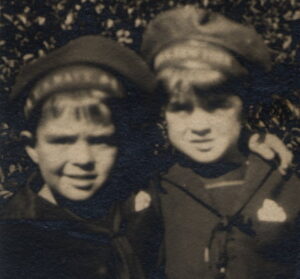 To some protest, I occasionally like to ask questions about my family’s history. In doing a little digging about my father and his relationship with his only sibling, I liked what I found.

Much a dead art today, as young men, the two brothers communicated frequently by letter. A while back I got to see some letters that they exchanged during very turbulent times in America. My uncle’s son, Robert, was a faithful keeper of his dad’s correspondence.

In the early 1940s, my dad, Charles, and his older brother, Thomas, were dealing with the furies of World War II. The brothers were “Irish Twins” born 51 weeks apart in Brooklyn around the end of World War I. 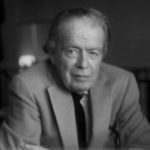 Their mother, Alice, raised them pretty much on her own. A very strong-willed lady — having lived through the boom of the Roaring 20s and the bust of the 1930s Depression — she was determined that her sons got an education. I learned that from the time they were little boys, she said that Tom was going to be “her lawyer” and my father, she insisted, was to be “her doctor.” And it happened.

The letters are at once poignant and entertaining. One letter talks about the “disaster” of a missing $5 bill. Another from my noncommissioned uncle writing to my newly commissioned officer-dad asked, “Have we figured out whether I have to salute you?” One especially thoughtful one from my uncle described how proud he was that he could now call his little brother “Doctor.”

“A brother is a friend given by nature.”
—Jean-Baptiste Legouve

With intelligence and humor they managed to hit notes of brotherly love and support during some very challenging world times. I also got the impression that they were young men under a lot of pressure.

My uncle Tom, who, thanks to a 1942 law degree and a quick analytical mind, traveled the nation with the vital US Army Quartermaster Corp. My dad, who, due to the needs of war finished medical school in just 3 years, was sent to fight in the Pacific as a US Navy lieutenant and a warship’s medical officer — all at age 25. 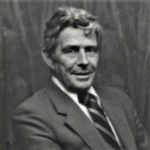 Both survived those times of conflict — but seldom told their children how — and prospered as successful professionals in the post-war years. My dad practiced medicine until the early 1990s and Tom was a prominent Manhattan corporate lawyer for half a century. They both married good women and my family included 8 children and Uncle Tom’s was 5. Their mom Alice died in late Summer 1955 at my parent’s home in Monmouth Beach.

In these very trying times, it’s uplifting to see the vitality of family.