You Tube Had Nothing on Dad

Every now and again when I felling a bit down, I’ll break out one of my family’s old home movies. I’ve learned that you can go home again — if only for awhile. 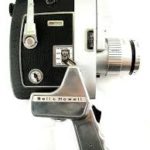 For this occasional therapeutic nostalgia I credit my father, who was a dedicated home-movie photographer. Even as a husband, father of eight, and busy doctor, he took the time to record his growing Monmouth Beach family on film for future generations to watch.

In recent years I have converted his large collection of 8 mm films (first to VHS and now to DVD) and sometimes watch them on TV. They’re a wonderful, personal cinematic portrait that can provoke both tears and laughter.

Lone Shooter
Back in the early 1950s when dad started his home-movie hobby, he was pretty much alone. “Not many others did it when I did and I had no experience or training in photography,” dad told me, “but I wanted to capture my family for posterity in some permanent way. And I didn’t want photographs.” Indeed, very Kelly family photos exist.

“Sometimes I get to places just when God’s ready to have me click the shutter.”
—Ansel Adams

Well before the time of today’s handy, hi-tech cameras and smartphones, my dad made do with an old Bell & Howell 8 mm camera. In those days, there was no in-camera review tool to see what you filmed nor were there any one-hour film developing shops. “It wasn’t easy back then,” dad explained. “For me, taking home movies was a lot of trial and error. I’d shoot a scene and have to wait awhile for the film to be developed to see if I got it right. Ultimately, I think I got pretty good at it.”

Being the ever-observant clinician, he took his behind-the-camera efforts pretty seriously. Watching the films as a young boy (I alone knew how to operate the projector), I remember my dad’s shrieks when we’d see a scene with his hand in front of the camera or a shot of an unattended camera left running.

Treasured Times Caught
In these trying times, I sometimes think we neglect to reflect back on the “good old days.” It’s a worthy pursuit, though. Like all families, mine had our good times and bad times. When I view those videos, the unpleasant times slip away and for a brief moment we’re young an innocent again.

Over a 20-year period, dad recorded on film the standard fare — birthdays, holiday parties, weddings, graduations, sporting events, and vacations (and a whole lot of bad hair and tacky cloths). But he also captured something far more poignant and meaningful — our lives and experiences as an American family. For that, I’ll always be grateful.