The Doctor Who Owned Monmouth Beach

I made a satisfying career on writing for and about physicians. So it was real neat to learn that a doctor played a meaningful role in Monmouth Beach history.

Just 6 months after the end of the Civil War, in October 1865, Dr. Arthur V.  Conover purchased all of what is now Monmouth Beach and much of Sea Bright for $30,000. That $5-per-acre acquisition opened the way for development. In a little over 5 years, he’d pair Gilded Age tycoon connections with pristine beachfront property to double his investment. 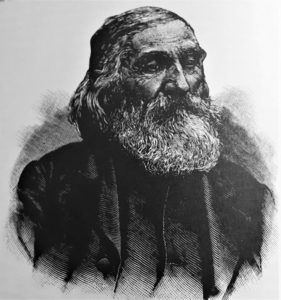 The doctor bought from the heirs of Major Henry Wardell, the great-great grandson of the area’s first settler, Eliakim Wardell, who got the land from the Lenepe for about $50 in goods. A physician from Freehold, Dr. Conover called his new property the “Sea-View Farm.” The property had been known as “Wardell’s Beach” since the first maps were drawn.

Born in Manalapan, NJ on January 30, 1809, Dr. Conover was just 21 when he married Eliza Ann Vanderveer. The couple had four children: Ellen, David, William and Jacob (the latter two were physicians themselves). Dr.  Conover studied medicine at what was to become the Columbia University College of Physicians and Surgeons under Dr. Valentine Mott, a renowned surgeon of his day. Dr. Conover practiced medicine for many years in Freehold before coming to Wardell’s shore property.

By 1869, Conover had sold the Sea Bright portion to Mifflin Paul. The unofficial founder of Sea Bright, Paul paid $5,000 to buy much of the area and plotted it out. At that time not a single house existed. A true wheeler-dealer, Paul started the railroad in town, built the first bridge and the Long Branch-Seabright Turnpike (essentially Ocean Avenue). He also set up the original the Octagon Hotel and Peninsula House Hotel. Paul died in April 1890.

“The major fortunes in America have been in land.”
–John D. Rockefeller

According the book Album of Long Branch: A Series of Photographic Views with Letter-Press Sketches by J.H. Schenck (1868), Dr. Convover also constructed several out-buildings as well as a new railroad depot, just 250 yards from his house. He also did business with the local fishing industry, selling land for pound boaters to get started in Galilee.

The house photoed below, built by Benjamin Wardell in 1788, was where Dr. Conover worked out a deal with three elite representatives of the Monmouth Beach Association (John Torrey, Cortland Parker, and Anthony Keasbey) to sell his holdings for $60,000 in early 1871. This group of wealthy East Coast professionals is largely credited with developing the borough layout that we know today.

The first structure ever built in Monmouth Beach by Eliakim Wardell in the early 1670s is called a “farmhouse” in the Schenck book. That structure was rebuilt by Dr. Conover into the house below and still was not the final look at that spot. Later it would be replaced by a massive resort hotel. It all flamed out in 1929. The house below is unknown to me. I welcome input at gregkelly@monmouthbeachlife.com.

Something of an entrepreneur himself, Dr. Conover also owned the Metropolitan Hotel in bordering Long Branch. The resort spot was lost to a fire in April 1876 (later the Brighton Hotel was built on the location). Dr. Conover was also a member of the NJ state legislature in 1836 and was elected the Monmouth County Surrogate in 1840 and served for 10 years. He died in Freehold on June 8, 1896.

Dr. Conover’s house in Monmouth Beach. Does anyone recognize it?