Pete Dawkins: A Call to Duty

What can you say about Peter Dawkins? He’s the man with one of the greatest resumes in history — West Point graduate, Heisman Trophy winner, U.S. Army General, Rhodes Scholar, Princeton PhD, and Wall Street financier.

And one more thing — he’s a true gentleman.

I’ll admit upfront to being impressed with the guy. I have been ever since hearing about him while I was a young journalist in Long Branch in the mid-1980s. I finally got to meet him for an interview at his Rumson home (he now lives in Florida). I even got to hold the Heisman Trophy. Here are some of his thoughts:

In the Beginning
When asked to account for his wonderful life, he explained, “I’ve had more than my share of good fortune — and I do believe that early beginnings cast much of what you will become.” He should know. Peter Miller Dawkins, born March 8, 1938 in the suburbs of Detroit, successfully overcame Polio as a youngster.

He is the son of a dentist. “Dad always wanted to be a dentist even as a little boy,” Dawkins told me. Part-scientist, part-artist, Dr. Henry Dawkins lived to age 100 and “was in full command of his capacities” right up to the end. “I talked to my dad every day,” his son said. “Just an amazing guy.”

For early guidance, he credits his Depression era parents and a “wonderful” cigar-smoking grandma, Clara. Working on her rustic farm in Northwestern Michigan during many youth summers, Dawkins slopped pigs, milked cows, and planted fields. Ultimately his grandmother gave him 5 acres “for my own.” There he learned of self-reliance and hard work. “As I look back, that time was of enormous importance to me,” he said. “Those values became the bedrock of my life.”

Dawkins said he “wasn’t keen” on going to the U.S. Military Academy at West Point in 1955. It was his Cranbrook School football coach Fred Campbell, an ex-Marine, who believed in him. “He cared enough and thought the game was right for me and, without an appointment, he took me on a two-day drive to see the legendary Army Coach Red Blaik.” After a 5-hour wait for, and a 5-minute talk with Coach Blaik, Dawkins explained, “we went back to Michigan.”

Somehow the “dumb-like-a-fox” visit worked and at age 17 he earned admission to West Point. Calling the U.S. Military Academy both “intimating and inspiring,” Dawkins said he threw himself “into everything.” while there. “I was in total harmony,” he explained. “I loved the pressure. At West Point you learn to solve more and more complicated problems and by your senior year you’re pretty good at it. That’s the nature of the place. It’s a leadership laboratory.” For some role reversal, Dawkins when to Oxford on a Rhodes scholarship, where he learned to “ask the right questions.” A lifetime student, in 1979 he earned a doctorate in Public Affairs at Princeton University. 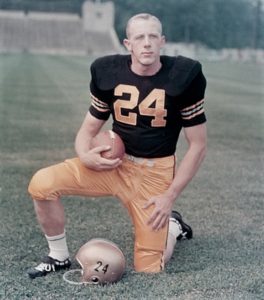 Gridiron Greatness
More than 65 years later, Dawkins is still involved with Army football. “It’s very hard for the service academies to compete in the football factories of today,” Dawkins explained.  “For West Point to play football on a national level, and as a national institution I think we must, things have to be done just right and smartly.”

Dawkins calls himself a “football voyeur — I follow it all. It’s been a great part of my life.” For many years he served as one of the selectors for the Harris Poll’s weekly ranking of college football teams. Those weekends were spent at home “awash” in college and pro football games.

When Dawkins won his Heisman Trophy in 1958, the West Point football squad “was not highly touted,” he said. “And players on unranked teams don’t win the Heisman.” But thanks to some innovation by Coach Blaik, Army was ready to march.  Blaik developed the Lonesome End formation, really the precursor to the modern wide receiver formation which dominates football today. When West Point blasted nationally-ranked South Carolina 48-0 in the season opener (with Dawkins scoring four TDs), there was no looking back. “It was just a magical season — we went undefeated. The last Army team to do so.”

Things were different then, he said. During college football season on weekends the New York Times would print several full pages on Army games. The team became the “darlings of the press,” he said. “And as captain I was propelled along with the team.” Even though West Point training and practice doesn’t allow for any egotism, Dawkins said he was both “surprised and proud” of his achievements. He explained that in his travels, people all over the world still ask him about the Heisman Trophy.

Almost a Senator
Monmouth County residents will recall the Dawkins name from his unsuccessful run for the United States Senate in 1988. About a race that brought national headlines, Dawkins said: “I look back at that time as a very positive experience for me and my family. My son (Sean) and daughter (Noel) took time off from college and they and my wife traveled with me all over the state. They became rabid campaigners. The whole family came together.”

“Although I didn’t do all the preliminary things that one does to run statewide, it was the right time for me,” he said. “Less than a week from Election Day, the polls had us dead even, then we ran out of money.” Facing millionaire incumbent Senator Frank Lautenberg (and the vaunted political team of Carville and Begala), Dawkins captured more than 1.2 million NJ votes or about 45%. (Personally, I can’t help wondering how much better NJ would have been with Pete Dawkins as our US Senator.)

“I have a secret and dangerous mission. Send me an Army football player.”
—General George Marshall

War & Lessons
As a solider, Vietnam was “my war,” Dawkins said. Commanding mostly elite airborne units there, he adds that the “wonderful” result of that long conflict in Southeast Asia is the nation learned a lesson.

“The vehement disagreement so many people had with the policy in Vietnam corroded their attitude toward people in uniform,” he explained. “Then, if you wore a uniform in the street, you really had people spit at you.” While working in Washington, DC on the National Security Council in the 1970s, then Major Dawkins, said he would wear civilian clothes when he left the Pentagon to go to the U.S. Capitol building for meetings. 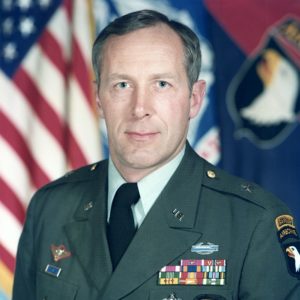 “But people have learned some things,” he said. “Even if you violently disagree with the policy in Iraq or Afghanistan, you have the utmost regard for the military. You see that everywhere. In their own minds, the American people have realized that this treatment of soldiers was misguided. They didn’t establish the policy; they’re just called upon to execute it.”

Although he says the military is always changing, some things seem to endure. “I genuinely believe that the men and women in uniform for today’s American armed forces are the best in history — the best in the history of any county,” Dawkins said. “They’re better trained, better equipped, more deeply committed, and possess a higher Esprit de Corps. It’s extraordinary. These people have been tested. They know that they’re part of something bigger than themselves.”

The general and his late wife, Judi, were very involved with helping America’s wounded warriors. The couple, who had a vacation home in Colorado, praised the worthy efforts of the Vail Veterans Program, which involves disabled vets in outdoor activities like skiing. “I sometimes think the volunteers get more out of it,” he said, “just to see the expression on the soldiers’ faces.”

Wall Street’s Lost Glory
Starting in 1983 as a partner at Lehman Brothers in New York City, he called his financial career “ fascinating,” “varied,” and joked that it “proved I couldn’t keep a job.” He did tours in investment banking, public banking, corporate banking, consulting, insurance, and wealth management.

In 1991, Dawkins was recruited by Sanford Weill, to become Chairman and CEO of Primerica Financial Services Inc. After Primerica, he held a number of senior positions within Citigroup, including Vice Chairman and EVP of Travelers Insurance, and Vice Chairman of the Citigroup Private Bank.

Speaking about the financial markets, Dawkins said “it’s impossible to overemphasize the part that greed played in creating the historic catastrophe for the financial markets in 2008. Looking back, it’s all so clear. You had elite Wall Street firms doing very risking things — leveraging themselves on crazy, Las Vegas dice-rolling stuff.” The creation of risky derivative investments where “mathematicians were put in charge of the business,” Dawkins explained, were a development that “no one understood.”

Still, he remains a big backer of “America’s entrepreneurial spirit” and warned that it’s something “we could lose if we’re not careful.” He said that the U.S. Congress doesn’t have the ability to control or solve complex market problems. “Only through entrepreneurial endeavors can we correct our economic problems. And I remain very hopeful that we will.”

No “Carpetbagger”
Like so many things in life, becoming a Monmouth County resident in 1987 was partly accidental. “My wife came here to play tennis at the Seabright Lawn Tennis & Cricket Club (in Rumson) and she fell in love with the area.” Then living in Manhattan, the couple was seeking to branch out and “Rumson just worked for us — it’s been our oasis away from the pressure.” 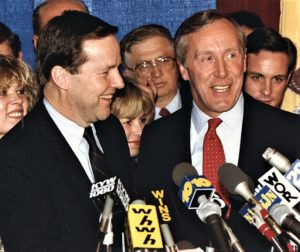 Traveling a lot on business, Dawkins said the “magic” of the local commuter ferry made the area a “very attractive and practical place to live.” He relishes the fact that Wall Street was just a 45-minute ferry ride away. “Rumson is just a different world,” he said. “We’re very blessed to be here.”

Dawkins likes to think that the community embraced him as he has it. He greatly valued his participation in several town military memorial events each year and offered pep talks to the Rumson-Fair Haven High School football team before its annual Thanksgiving Day game. “A great bunch of kids,” he said. “Rumson is small town America — that has a real comfortableness about it,” he says. “We’ve made so many friends here.”

Note: Dawkins was remarried in July 2019 to Mary Martin Ourisman, a former US Ambassador to Barbados and the Eastern Caribbean. The general’s first wife, Judith, died in February 2017 after 55 years of marriage.

Visit PeteDawkins.com for more on the man and his amazing life.